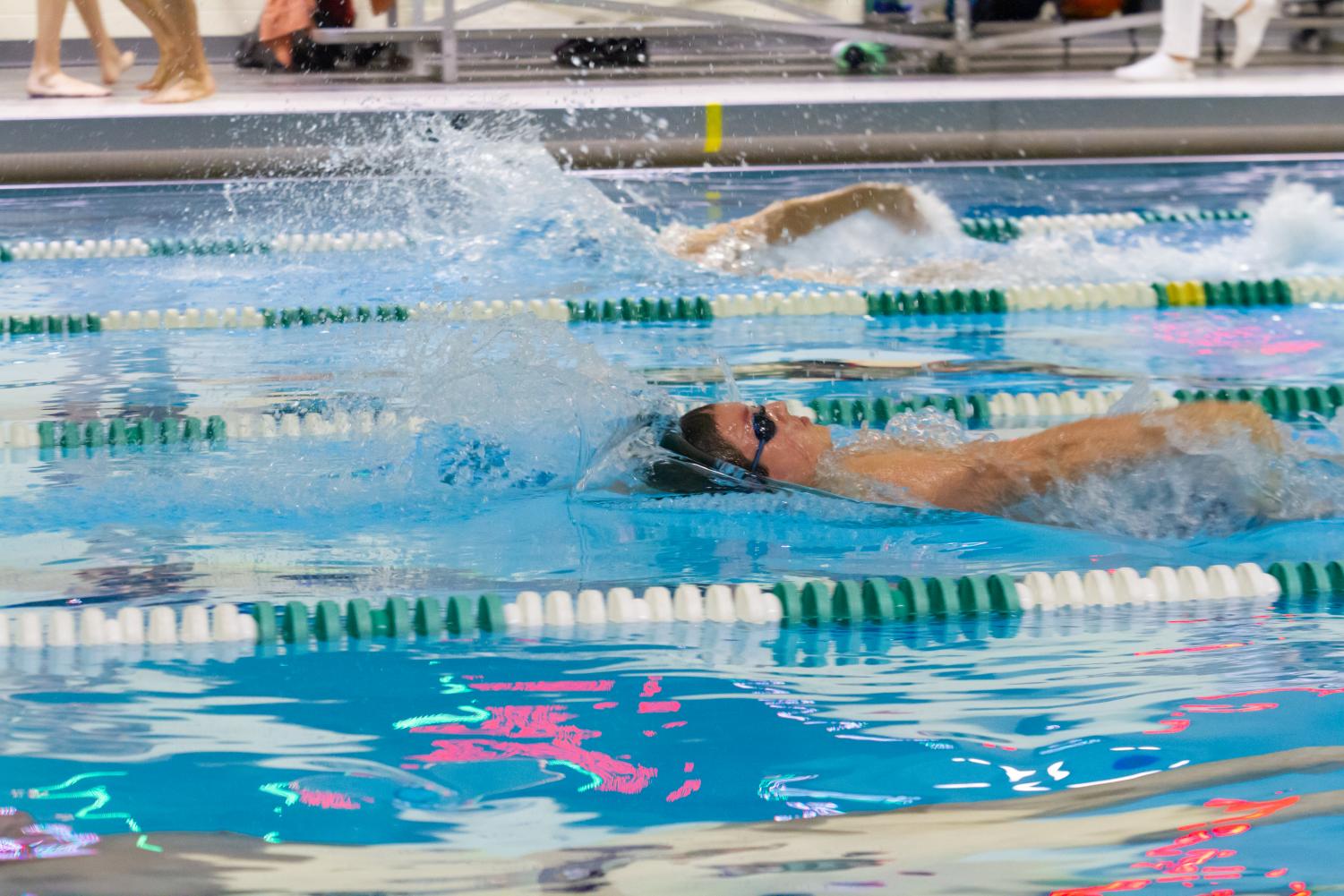 York swimmer does backstroke in the York swimming pool.

Junior Mathew Billenstein reached for structural support as he stepped onto the diving block for the first time since he started swimming six years ago. It was generally assumed that Billenstein would not be able to dive, but years later Billensteined preserved. Under direction from his all-time coach, Dave Davis,  he assumed ready position. Three whistle blasts pierced across the pool deck and, after a momentary silence, Billenstein leaped off of the diving block and entered headfirst. The people on the pool deck remained silent in anticipation until hearing the splash. Then they erupted with cheers.

In early October, Billenstein won the CNN Positive Athlete Award, and this February a book about his athletic accomplishments will be published. The award honors individuals who remain optimistic regardless of the difficulties that impact the athlete. Billenstein is a partially paralyzed athlete who competes on York Water Polo and Swim and Dive Team specializing in freestyle.

Billenstein started swimming in seventh grade, and Head Coach Dave Davis has guided Billenstein through his young but accomplished athletic career ever since.

“He is what the award says; he’s the epitome of the positive athlete,” Davis said. “He’s positive regardless of what’s thrown at him, and I think there’s no dispute in an award like that, especially for him.”

Since Billenstein began swimming, his coaches and his family have seen the vast improvements for Billenstein in and out of the water.

“Swimming has greatly impacted Matthew’s life for the positive,” his mother Sheila Billenstein said. “He is part of a great group of young men. He told me [his] freshman year after about a week of practice that for the first time he feels like he fits in somewhere. It has also given him confidence that he never knew he had until he started swimming and seeing all of his goals be met.”

“My favorite thing was when I qualified for states and going to sectionals freshmen year,”  Billenstein said. “It was fun to dye my hair and shave it into the letter Y. My favorite memory from sectionals was breaking a minute and seeing my coach cry of happiness since I broke a minute and my teammates cheering me on.”

Billenstein radiates the support from his teammates and coaches to others. At every competition, whether it’s for club or varsity, Billenstein is cheering for his friends.

“Matt’s characteristics help the team’s environment,” junior and teammate Josh Allen said. “He’s funny, upbeat, and acts present during both practices and competitions. Matt has taught me to never give up even when the odds are against you.”

With the York swim season is just around the corner, Billenstein waits in anticipation for another successful season.

“I’m excited for my third year of swimming for York,” Billenstein said. “It’s a close team and everyone is there to support each other and build confidence. The boys and coaches on the York swim team have been such a positive and supportive team for me. The teammates make practices really engaging and intense. I feel like I fit in, and no one unfairly judges me for who I am.”