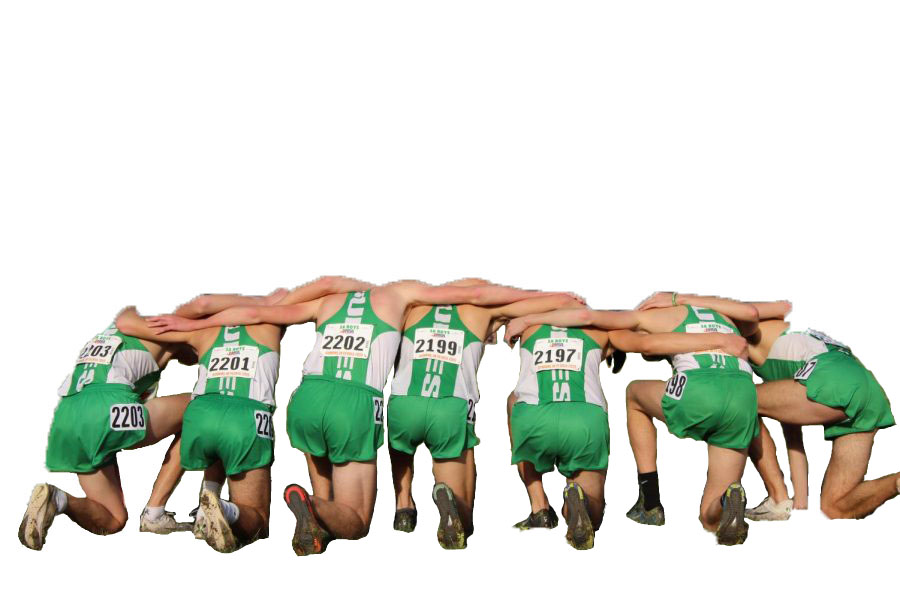 The boys varsity team gathers together for a solemn moment of prayer after running in the state meet. (Photo by Grace Moriarty)

The boys varsity team gathers together for a solemn moment of prayer after running in the state meet.

Cross country is not typically known for its fan section; however, this year the narrative changed completely.
Over 250 fans made the trip down to Peoria to cheer on the boys and girls teams running in the state meet. Seniors Steve Chornij, Jensen Redick, Will Ahern and Kameron Stearns wanted to “hype up” fans for cross country. The boys hosted a student tailgate that drew in the largest crowd yet.

“I’ve been at the state meet the past few years, and I’ve never seen a crowd like this before,” Chornij said. “The whole school is rallying around this team because we know that the state meet is the Dukes meet.”

At the tailgate students took photos, barbecued, played bags and created posters for the runners. Undeniably, York had the largest fan section at the meet, and the “sea of green”, as described by a Milesplit reporter, could be spotted from across the park.

“Win or lose we had so much fun cheering on both the girls and boys teams running in the meet,” senior Maddy McGreal said. “The energy at the state meet is infectious and the experience will be unforgettable.”

Coming into this cross country season, it had been six years since the York boys won their last state title, the longest drought since 1962.
During the tenure of past head coach Joe Newton, the team won 28 state championships spanning from 1962 to 2012. Since that last state championship as the team had yet to finish in the top three or stand on the state podium.

“Since eighth grade, Daniel Klysh and I have been talking about bringing home a state championship to York and to our coaches,” varsity runner Ethan Kern said. “Every day at practice we focused on putting in the best effort to satisfy that dream. To come just short of the first place title did sting, but finally being able to bring a state trophy back to my dad [Coach Kern], Coach Hedman and Coach Boyd is something we are all very proud of.”

The message from the beginning was that this season was a “revenge tour.” This was the year that York would get back on top.
They didn’t disappoint at state as the team took third place with 153 points at the State meet at Detweiller Park down in Peoria, and senior Daniel Klysh placed 10th in the state, earning an all-state title.

In addition to the boys exceptional performance, the girls proved a relentless effort as well. The girls went out strong and, focusing on a strong and confident start, then staying a fierce pack for a good portion of the race.

“It seemed like the whole school showed up to support us for the state series,” varsity runner Kathleen Buhrfiend said. “Around every turn, there would be someone cheering you on, York has the best school spirit in the state by far.”