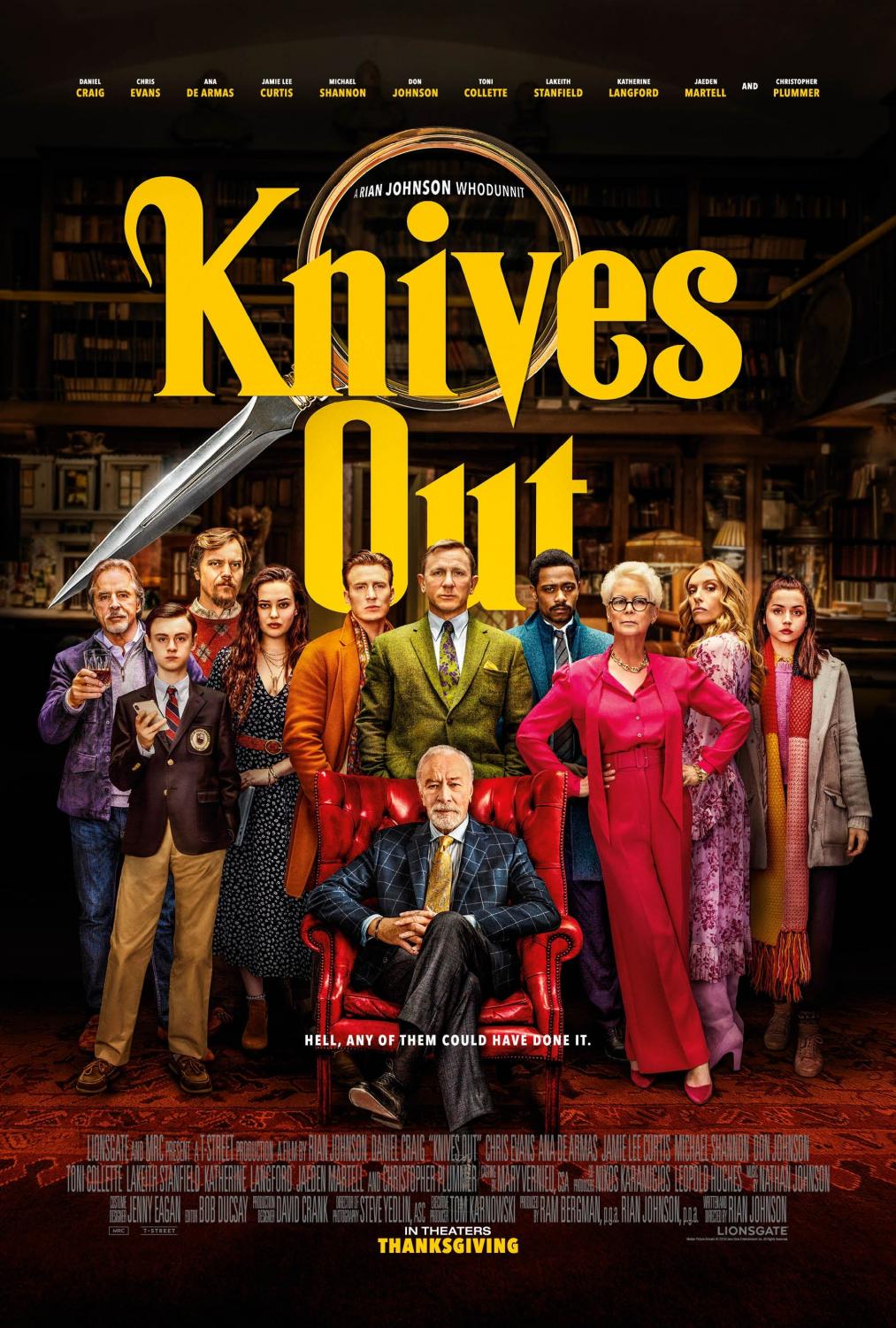 “Knives Out” is a sharp addition to the whodunnit genre

Growing up, I played countless hours of “Clue”, a board game where you solved a murder mystery by asking “who committed the murder?”, “where was it committed?” and “what weapon was used?”. Rian Johnson’s new whodunnit film “Knives Out” has a similar premise with a complex old manor and shady family members (all with different motives). However, the questions and twists were much more complex and shocking than in the classic board game.

Taking place in modern-day, “Knives Out” has all the elements of an Agatha Christie mystery. The action is set in a shadowy manor, there are flashbacks to the murder galore and family members have compelling motives. Contrasting the old fashioned mystery elements was technology and modern-day references. It gave the sense of a family lost in the past of aristocracy and the delusion of self-made wealth. The music also was more old fashioned but had modern nuances. The song in the trailer, “I’m Gonna Live Til I Die”, is by Frank Sinatra however a modern more technological spin was put on it to transcend the decades.

The star-studded family was brilliantly cast. All of the acting was bold and thoughtful but never crossed the line to unbelievable. Jaime Lee Curtis played a “self-made” businesswoman sporting a magenta pantsuit. She was always intimidating and confident before desperate to preserve her lifestyle. Her son Ransom (Chris Evans) was obnoxious and aggressive with a lot of amusing sarcasm. Joni (Toni Collete) married into the family, however, she was still using the wealth for her daughter Meg’s (Katherine Langford) education. Walt (Michael Shannon) was desperate to continue running his father’s publishing company with his racist wife and “basically a Nazi” son. Many of these characters served as caricatures, not quite realistic but never too extreme.

Rounding out the cast was Daniel Craig playing the renowned Southern detective Benoit Blanc and Ana de Armas as Marta Cabrera, the family nurse. Benoit Blanc’s presence was a mystery within itself for the entirety of the film, and he was observant, suspicious, and perceptive (with a thick Southern accent). Spending time with the detective, Marfta Cabrera was the nurse of the home. She served as the good of heart in a story full of morally complex characters.

The humor in “Knives Out” often came from the self-awareness that it was a completely cliche whodunnit film. The characters, settings, and dialogue were just so stereotypical that it worked well to create an amusing and entertaining movie. The interesting cinematography – from slow-mo fight scenes to wide shots of the entire family- lent to the humorous and cliche-cognizant mood of the film.

Though “Knives Out” had every element of a mystery, the actual heart and theme of the film rested in the idea of the power of wealth over a family. The actual solution to the mystery was very underwhelming. It was logical and not far fetched but also not very exciting or mind-blowing. The true reason I walked out of the theatre so impressed was the underlying complexity of the family relations and how their world influenced them. “Knives Out” showed the shadowy manor may work as a textbook mystery setting, but it also can reveal the weight individuals put on status and money over family.