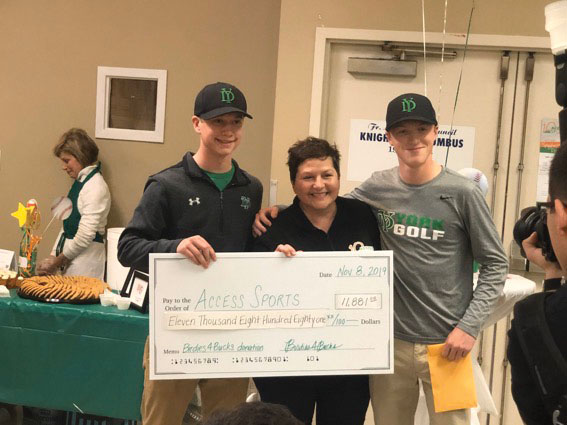 Juniors Connor Polomsky and Dylan Stockwell give joy in form of a check of $11,881 to Dena Seidenfuss at the Access Sports Banquet on Nov. 8.

It’s no question that the York boys golf team enjoyed a lot of success on the course, as they placed 4th in state for the 2019 season. However, the most impressive thing about them is the work that they’ve done off the course.

Juniors Dylan Stockwell and Connor Polomsky have worked with the golf team to raise over $10,000 for a local group called Access Sports, an organization that sets up team sports activities for kids with special needs. Their organization, called Birdies for Bucks, stemmed from both Stockwell and Polomsky’s previous involvement with Access Sports.

“Because we both have been involved in Access Sports and because we’re both on golf, it made sense to start Birdies for Bucks,” Polomsky said.

“Our first goal was to try and see how much money we could get by just counting the birdies that our team made,” Stockwell said. “But then most of our donations were flat donations from families that Connor and I knew.”

Although the organization is run only by Stockwell and Polomsky, the entire boys golf community was very supportive of the organization, and did everything they could to help out.

“[Head Coach Jim Borel] was very supportive of what we wanted to do and kept track of birdies, so we could give a final total to anyone sponsoring per birdie,” Polomsky said. “The guys on our team wanted to help too and were good with having their birdies count in the total.”

Borel was behind the boys from the start, and helped to make sure the fundraising ran smoothly.

“They came to me with [Birdies for Bucks] and I was totally supportive from the get-go,” Borel said. “I was willing to do everything I could to help them.”

With all the support they got, Birdies for Bucks was a huge success, raising $12,081 and still counting as of Nov. 11, 2019. Although Birdies for Bucks isn’t a non-profit organization yet, Polomsky and Stockwell would like to hopefully continue to grow the organization. If you are considering donating in the future or would simply like to learn more, you can follow the group on Twitter at @ElmBirdies4