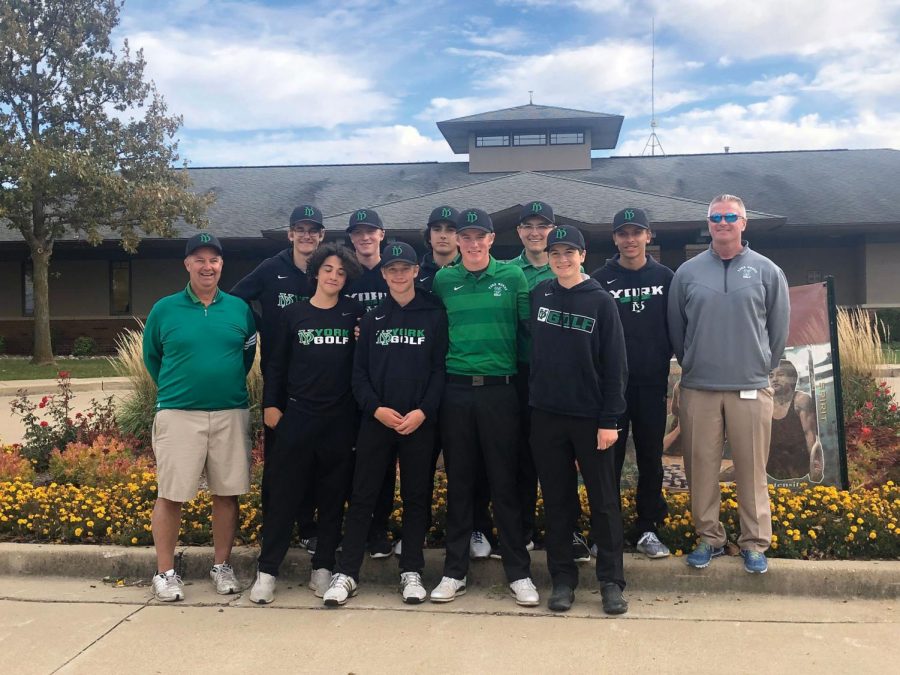 The team made York history when at The Den at Fox Creek Golf Course, placing higher than any other York team.

This past fall, the boys golf team enjoyed their most successful season ever. After the regular season, they went on a run that started with placing first at both the conference and regional  meets. They then moved on to sectionals, where they placed third, before placing fourth overall at the state meet, their best finish in history. This success was largely thanks to seniors Josh LaBounty and Matt Buckley, who both ended up placing third and sixth at state respectively.

“Placing third as an individual felt really special because it is the best in school history,” LaBounty said. “The same goes for the team. We all worked really hard this season and knew we had a good chance to place.”

This record breaking performance, both as a team and individually for LaBounty, was something that the whole team took pride in.

“To be six over par through five holes and come back to get to even, that’s a major accomplishment for a high school golfer,” Head Coach Jim Borel said regarding LaBounty’s performance.

Along with the outstanding performances of LaBounty and Buckley, another factor for the success of this team was how close they were to one another, and how they were supportive of each other whether a teammate was having a great day or struggling.

“I credit my success to my teammates because we always fought for each other and kept each other accountable for what we did,” Buckley said. “When our teammates were not playing well Josh and I told the guys to keep fighting and to find a way to grind out a good round.”

The lessons the team has learned through their season will help the returning golfers to reach even greater heights next year. The juniors and underclassmen put the team in a very good position for more playoff contention and a bright future.

“Next year’s team could eclipse this year,” Borel said. “We’ll see how good we are, but we’re pretty excited about next year’s team.”