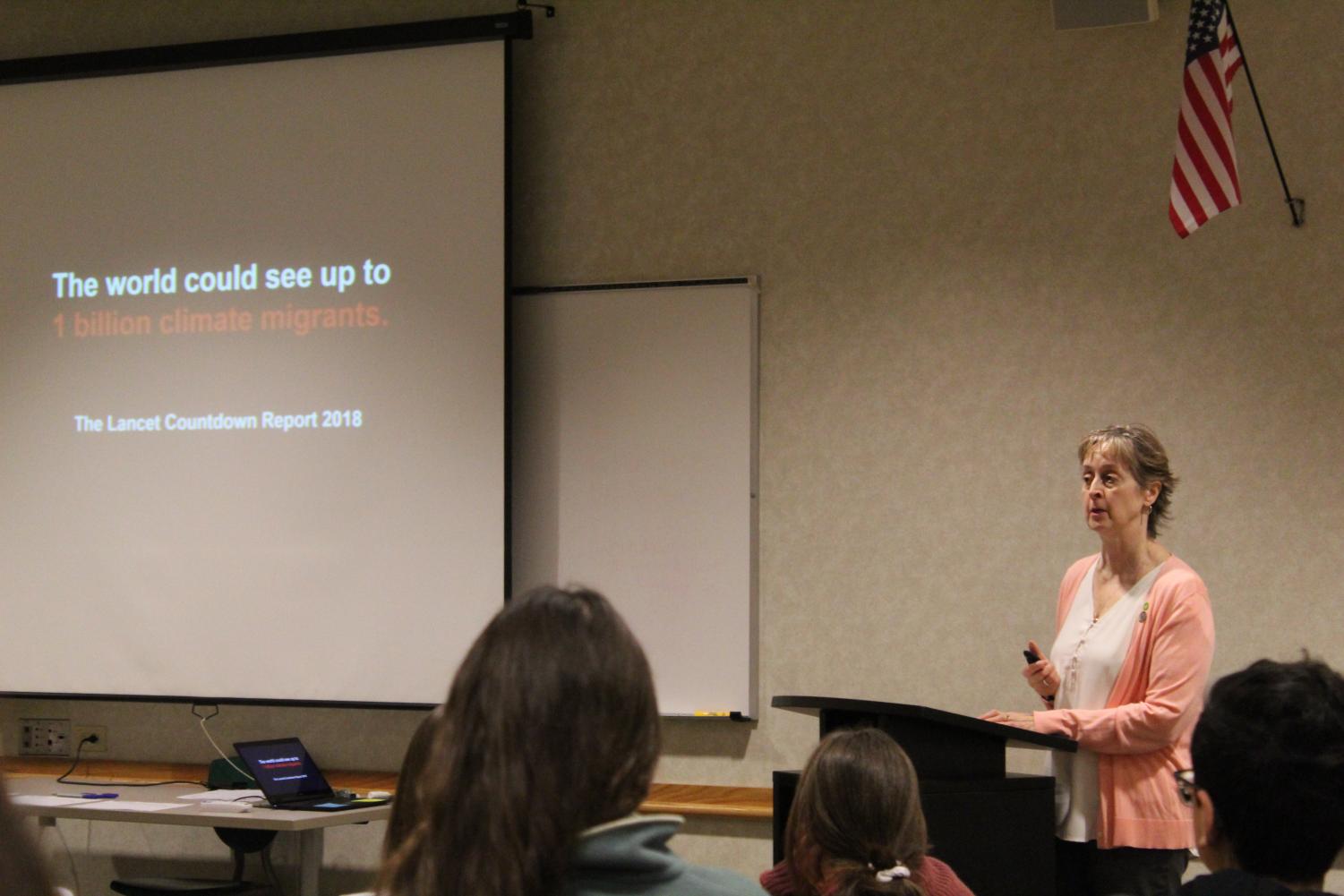 Ms. Iverson presents to students about people migrating due to climate problems at her climate reality speech on Nov. 21. The speech was given to hundreds of other students worldwide by various trained climate reality leaders at the same time. (Cate Chlystek)

Ms. Iverson presents to students about people migrating due to climate problems at her climate reality speech on Nov. 21. The speech was given to hundreds of other students worldwide by various trained climate reality leaders at the same time.

York students and faculty are becoming quickly aware of the growing climate problems around them and are making efforts to spread awareness. Several York teachers have extended their role to educate students on the realities of climate change.

Studies now show that after 2030 the effects of climate change will become irreversible and the world will be on track for destruction. There are ways to stop it, but scientists indicate we must act fast to slow down climate change.

Iverson had a climate reality presentation on Nov. 21 to inform any students that wanted to come about the dangers of climate change. Although, she is not the only teacher educating students about climate problems.

“It’s important for students to study the environment so they know to fully understand the devastation from the climate,” AP environmental science teacher Dustin Felix said.

While there are still those who don’t believe climate change exists, the evidence is non-negotiable. NASA reports show that Greenland and Antarctica have lost billions of tons of ice in the past year and the numbers are rising dramatically.

“People often dismiss the science behind climate change as being too difficult for the ordinary person to understand and it’s not,” Felix said.

York students aren’t the only ones worried about their environment. Youtuber Mr. Beast and the Arbor Day Foundation, the largest nonprofit membership organization dedicated to tree planting,  started the Team Trees Foundation to create massive efforts to limit the impacts of climate change. They were able to get over 600 YouTubers on board to help support their cause. For every dollar donated one tree would be planted in a safe area.  Their goal was to plant 20 million trees before 2020 through $20 million in donations.

“Here’s the thing to know about team trees, 20 million trees by 2020 is not going to cure climate change, but it’s a step in the right direction and a constructive positive way to send the message that we see the science, and we care,” said Youtuber and former NASA employee Mark Rober.

The Team Trees foundation is taking the internet by storm, and it’s getting York students to take a hard look at the problems around them.

Planting trees is a great solution to combat climate change as it takes in carbon and putting out more oxygen,” junior Clare Cockman said.

Everyone around the world is getting a wake-up call from the environment. In the past year alone there have been thousands of climate strikes worldwide. In September, there was even a climate strike run by students in over 150 countries.

“It’s something that everyone needs to know and take a hard look at because it’s scary,” Cockman said. “We’re going to have to become adults and live and function in this world that other people destroyed for us. I think we need to do something, and we need to do it now.”

These problems may seem difficult to tackle. However, students everywhere are trying to make a difference.