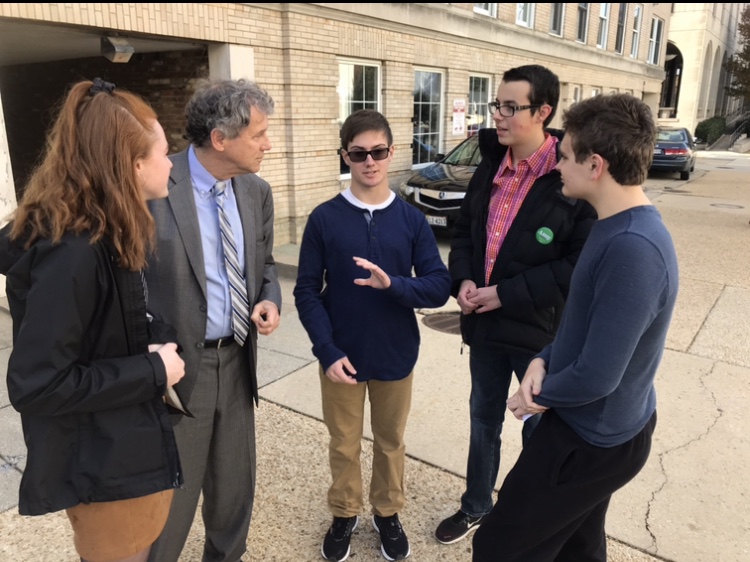 Impeachment: inside the inquiry | Podcast #6: Our day in D.C.

Inside the impeachment inquiry 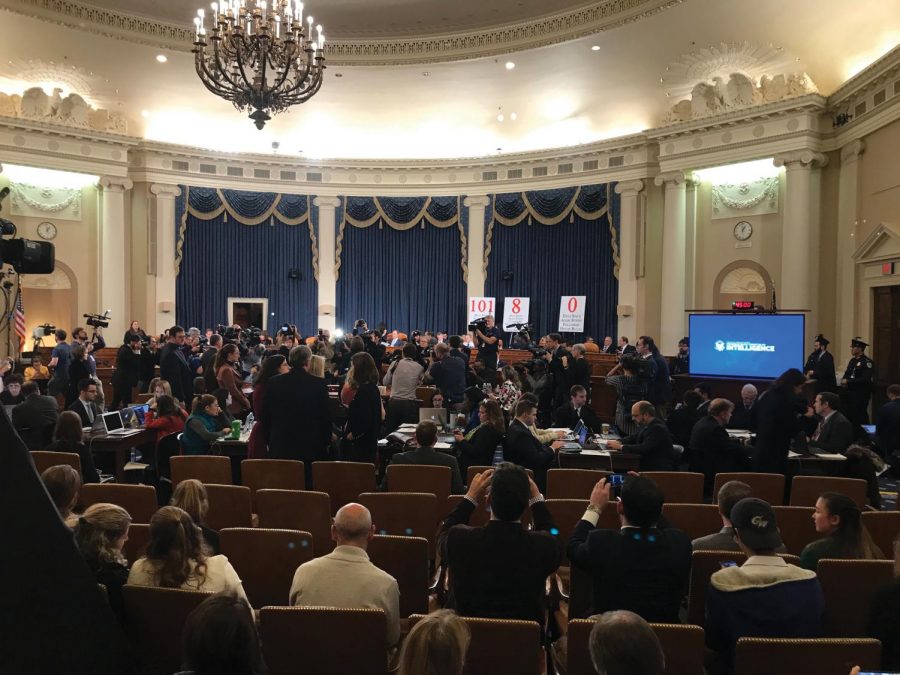 One-hundred and one Days Since Adam Schiff Learned the Identity of the Whistleblower.

Eight Days since Adam Schiff claimed he didn’t know the Identity of the Whistleblower.

Those phrases were written on three large poster boards set up behind the Republican side of the House Intelligence Committee on Thursday, Nov. 21, during impeachment hearings in the Longworth Office Building; where witnesses Fiona Hill, a former member of the U.S. National Security Council (NSC) who specialized in Russian affairs, and David Holmes, who worked as a U.S. Embassy official in the Ukraine, testified.

In all of the United States History only two presidents have ever faced a vote of impeachment on the floor of the House of Representatives, Bill Clinton and Andrew Johnson. Two others, Richard Nixon and James Buchanan, have faced inquiries into whether the House should vote on impeachment. Then in September, a little over 231 years after the ratification of the Constitution, Donald Trump became the fifth president to ever have an impeachment inquiry in his midst, which led to York journalists being able to sit in on what might have been the hearing of the decade.
The first thing to know about impeachment hearings is that, as long as the leader of the inquiry deems testimony appropriate for public consumption, the hearings are open to the public. In addition, contrary to public belief, the hearings are not actually held inside of the Capitol Building. They are held in the office buildings that sit alongside each respective side of the Capitol, Senate and House. That is where we were granted the opportunity of witnessing this historical event first hand.

Before we could get in, the committee broke for a two hour lunch, meaning that we had to wait in line for an hour and a half. Only ten minutes before the hearing resumed, we were brought to our seats.

Surrounded by professional journalists and photographers from varying news outlets, we were ushered to our seats by several security officers. The back wall was lined with guards who insured that civilians were orderly and did not take video or photographs while the questioning was taking place. Most committee hearings have just a couple of people upfront, but this was different. In the front of the room was a swarm of photographers and professional journalists waiting for the representatives and witnesses to come back into the room.
As the questioning played out, beginning with Chairman Adam Schiff and Republican Ranking Member Devin Nunes, it became clear that committee members on both sides were eager to make their positions clear in a very publicized way.

During Nunes’ questioning of Hill, he made a point to attempt to incriminate Democrats in the same type of behavior they are accusing President Trump of saying that the “Clinton campaign and Democrats” paid for the “Steele Dossier,” a series of memos related to alleged collaboration between the Trump campaign and the Russian Government in 2016. Republicans also asked about the validity of statements made by Trump regarding Ukranian meddling in the 2016 Election. Trump and the Republicans have been pushing the narrative that Ukranian and U.S. officials made inappropriate statements about the Trump Campaign, which they say, constitutes meddling. However, in the first half of the hearing, Hill dismissed the claim as a “fictional narrative.”
While nearly every representative was publicly clear about their position on the inquiry, perhaps no one stood out more than Rep. Jim Jordan (R-OH), who was repeatedly silenced by Chairman Schiff’s gavel for interrupting the two witnesses. Jordan, who replaced Rep. Rick Crawford (R-AR), joined the committee in early November because of the belief that he is one of the best “attack dogs” on Capitol Hill. At one point, Jordan accused Hill of using “government speak,” in other words, not giving direct or completely honest answers. Hill remained fairly objective and chose not to respond to this attack, and several others made during the hearing, but the exchanges made for some interesting, and at times entertaining, moments for us in the hearing.

Elmhurst’s Representative in the U.S. House, Democrat Mike Quigley, sits on the Intelligence Committee, and though attempts to obtain an interview after the hearing were unsuccessful, he shared his insight about the process of impeachment the day before the hearing on CNN.

“The fact of the matter is the President and the White House are covering this up,” Quigley said. “It makes the investigation more difficult, [and] it makes writing an article of impeachment involving obstruction easier.”

During the hearing, Quigley asked the witness a lot of questions regarding the validity of statements made by other previous witnesses. His questions all sought to solidify the timetable and accuracy of the narrative of the situation between the U.S. and the Ukraine.

Overall, the experience was a once in a lifetime opportunity that we will cherish forever.