THIS IS YORK • December 7, 2019 • https://thisisyork.org/27118/news/students-and-staff-adapt-to-new-retake-oriented-system-of-math-grading/ 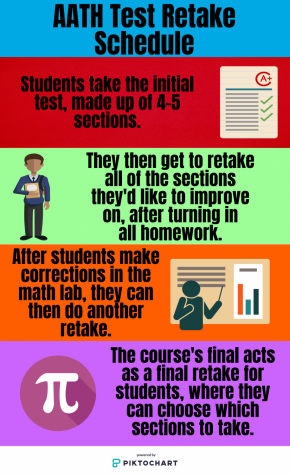 Both math teachers and students alike have had to adapt to a new system centered around testing, where retakes have become increasingly important.

In AATH (Advanced Algebra Trigonometry Honors), students have been testing out a new system of grading. Tests, and a single project grade, account for 100% of their grade. Tests are concept oriented, with students testing an average of 5 subjects, where they can get up to a 10. Quizzes, homework, and worksheets do not get scored. Instead of grading these, teachers now focus their attention on several retakes open to students, during which they can get full credit back on whichever sections they want to retake.

“We’ve changed our mindset on what grading is, and what we do with grading,”  Ismael Zamora, math department chair, said. “We’ve broken down the courses down to their standards. We’ve tried to identify what they key components of the chapters are. Then we do quizzes or tests based on those standards. We try to figure out when a student makes a mistake, is it a small mistake.”

It’s unclear how effective this new system of grading has been so far. While this is the first year the new system has been implemented, it may be used in the future. There are concerns, however, about incentivizing work like quizzes and homework.

“Homework is the part we’re struggling with. Students are supposed to see it as a motivator,” Zamora said. “Students now see it as, oh, I don’t have to do it. But if you don’t do it, what it ends up becoming is you don’t get better at the content.”

Many students have taken advantage of the new retake system, trying to aim for a higher score. While studying for each test is in itself a challenge for many, so is maintaining focus on new concepts in the class at the same time.

“Surprisingly, the workload is more, because either way you have to do the homework if you want to retake it,” A.J Swiatek, a sophomore currently in AATH, said. “You have to study for more tests, which takes up more time.”

Students are expected to study for retakes while learning new content for the upcoming test, meaning many are usually learning content for one test at the same time as another in the class. This can prove difficult for some, especially in a system where quizzes are not graded.

“The first tests were definitely harder than before,” Swiatek said. “Everything just kind of piled on”.

It’s also important to keep in mind where students are taking these retakes.  For the most part, this takes place in the Test Makeup Center. Earlier in the year, the TMC, which can only hold so many students, began to overcrowd.

“I couldn’t figure out why the lines were so long to get into the TMC,” Jonathan Immel, head of the Learning Commons, said. “When I looked on the spreadsheet, a lot of the tests coming were retakes, and I decided I should start to track these.”

In October, the Learning Commons began having students fill out mandatory forms if they were doing a retake. These forms asked what teacher it was for, and what class. Soon thereafter, some AATH classes began to have students take retakes in class to prevent overcrowding in the TMC. Students would now take their new test instead of doing the quizzes on the current chapter, if they chose. They got a copy of the quiz to take home, but now many students wouldn’t take any assessments on their current unit until their test.

“I actually had to change a staff member’s hours due to the influx of kids and tests,” Immel said. “It’s really hard to manage when some days there’s forty students and they’re all starting at separate times.”

Immel now says that he believes the TMC has a firm grasp on the issue, and long lines should no longer be an issue. As for AATH, students who wish to do retakes now have to choose between taking their quiz in class, or trying to get a better score for the old unit. Still, the math department is confident their new system is working.

“We’re still talking about tweaks that we want to make to help students,” Zamora said. “Our focus is learning, we want the students to learn. The grade to me is irrelevant. If you understand the material the grade will follow.”