NFL Divisional Round preview and picks 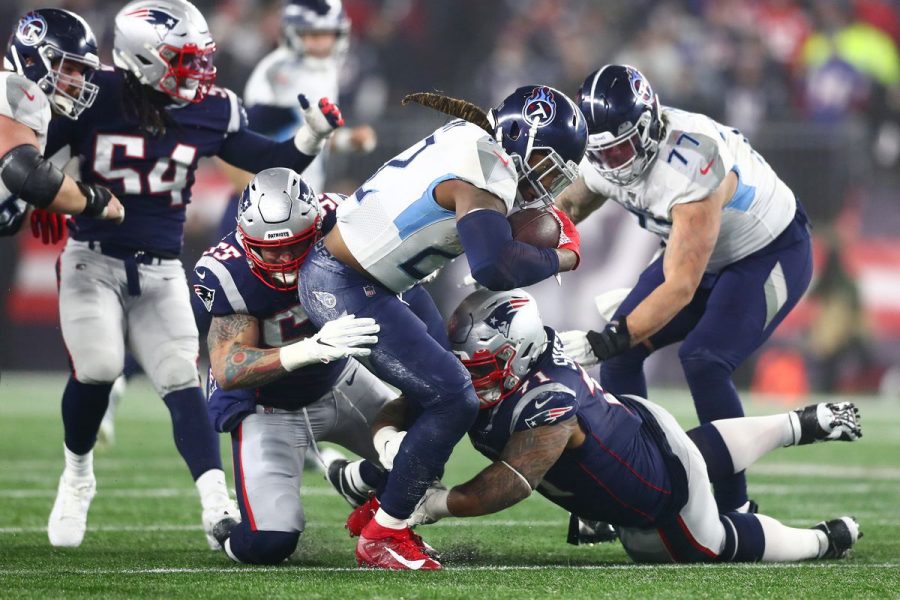 After a monster game against the Patriots last weekend, Titans running back Derrick Henry looks to keep his team alive this Saturday in Baltimore.

Last weekend, the NFL blessed its fans with one of the most exciting opening playoff weekends to date. Out of the four games, two went into overtime and the other two ended as one-possession games. The world witnessed the New England Patriots fall at home to the Tennessee Titans in what may have been quarterback Tom Brady’s last game. Other big moments included running back Marshawn Lynch’s first touchdown since coming back from retirement to play for the Seattle Seahawks. Titans running back Derrick Henry had a monster day with 182 rushing yards on 34 carries. Quarterbacks Deshaun Watson, of the Houston Texans and Kirk Cousins, of the Minnesota Vikings, lead their respective teams to overtime wins.

This weekend, fans will get a chance to see some of these underdogs take on the powerhouse teams of the regular season such as MVP favorite Lamar Jackson and the Baltimore Ravens and Jimmy Garoppolo and the San Francisco 49ers. Below, we dropped our predictions for the four star-studded matchups.

Joey – Kirk Cousins showed up big in the spotlight last week for, arguably, the best performance of his career. Known for historically choking when put on the big stage, his numbers may not have been anything crazy, but he delivered in the playoffs. This week it’ll be a totally different story as the Vikings travel to San Francisco to take on the NFC’s top-dog, the 49ers. Finishing the regular season with a record of 13-3, the 49ers saw all three of their losses come in the final seconds. This is may be the most well-rounded team in the NFL. They dominated on both sides of the ball throughout the course of the year. Minnesota might have had some magic last week in New Orleans, but I can’t see them pulling this one out in the bay. Pick: 49ers

Jake – Nobody expected Minnesota to go into the Superdome last week and take down the mighty Saints, but Kirk Cousins came in and did the unthinkable. I expect the same thing to happen at Levi’s Stadium. Minnesota showed up as a new team last week, don’t be surprised if this same team shows up on Saturday and sends them to the NFC Championship Game. Pick: Vikings

Joey – Speaking of big performances, last week Derrick Henry carried the Titans to upset the reigning Super Bowl champions, the New England Patriots, on their home turf. Henry posted an incredible 182 rushing yards and one touchdown on 34 carries. However, this week he will be up against a Baltimore defense that allowed only 4.4 yards per carry and just 93.4 yards per game. On the other side of the ball for the Ravens, we see MVP favorite Lamar Jackson and a Ravens offense that finished the year ranked second. While the Tennessee defense did manage to hold New England to just 13 points last week, I can’t see them slowing down this red hot Ravens team.  Pick: Ravens

Jake – We saw last week how heavily Tennessee relied on running the ball to send them past New England; however, this will not work against the number four run defense in the league.This Baltimore team is a different breed with Lamar Jackson at the helm. I expect Jackson to put the Ravens on his back and use both his legs and his arm to send the Ravens to the AFC Championship Game.  Pick: Ravens

Joey – In last week’s game between Houston and Buffalo, Texans defensive end J.J. Watt made the unbelievable return to the field after sustaining a town pectoral muscle just eight weeks prior. Normally, this is an injury that requires a recovery time of 6-12 months; however, the former MVP did the impossible and came back to a win over the Bills. While they certainly struggled during parts of last weekend’s game, this Texas team that can definitely compete with the Chiefs. However, Arrowhead Stadium in Kansas City is considered one of the hardest for opponents to play in, and in a game this close that might just be the deciding factor.   Pick: Chiefs

Jake – The Houston Texans came out sleeping in the first half last week’s game against the Buffalo Bills, but then they turned on a new gear in the second half. We also saw Bills defensive end Josh Allen lead a last-second comeback to send the game into overtime. This raises questions for Houston: all they had to do was hold Buffalo to a turnover on downs to clinch the game in regulation, and they were unable to do so, but did end up eventually winning the game. However, I do not see them being able to ride this wave into Sunday’s game against Kansas City. Expect Kansas City to utilize quarterback Patrick Mahomes’ scrambling skills to extend plays against the defensive line of Houston, carry Kansas City to an easy win and earn a trip to Baltimore for the AFC Championship Game.  Pick: Chiefs

Joey – The Seattle Seahawks have certainly been a team with its peaks and valleys this season. Back in early November, this was a team that went into San Francisco and handed the 49ers their first loss of the season. The game proved they should be considered a Super Bowl contender. However, they raised some question marks with fans across the country when they lost their final two games to a weak Arizona Cardinals team and this time losing to the 49ers. In a show of strength, they managed to beat an injury-depleted Eagles team last week. Packers quarterback Aaron Rodgers has a 3-2 record at home in the playoffs, and while the Packers have also shown struggles this season, I can’t see them letting this game slip away. Pick: Packers

Jake – Last week’s Seahawks win over an injury-filled Eagles team should be seen as more concerning than positive. If we had seen Seattle go out and put on a clinic against Philadelphia then I would look at this weekends upcoming game against the Packers differently. Instead, I see quarterback Aaron Rodgers and running back Aaron Jones leading the offense for the Packers past the Seahawks defense. However, I believe Seahawks quarterback Russell Wilson will keep his team in the game. However, this might only serve to set Packers placekicker Mason Crosby up for the game-winning field goal.  Pick: Packers