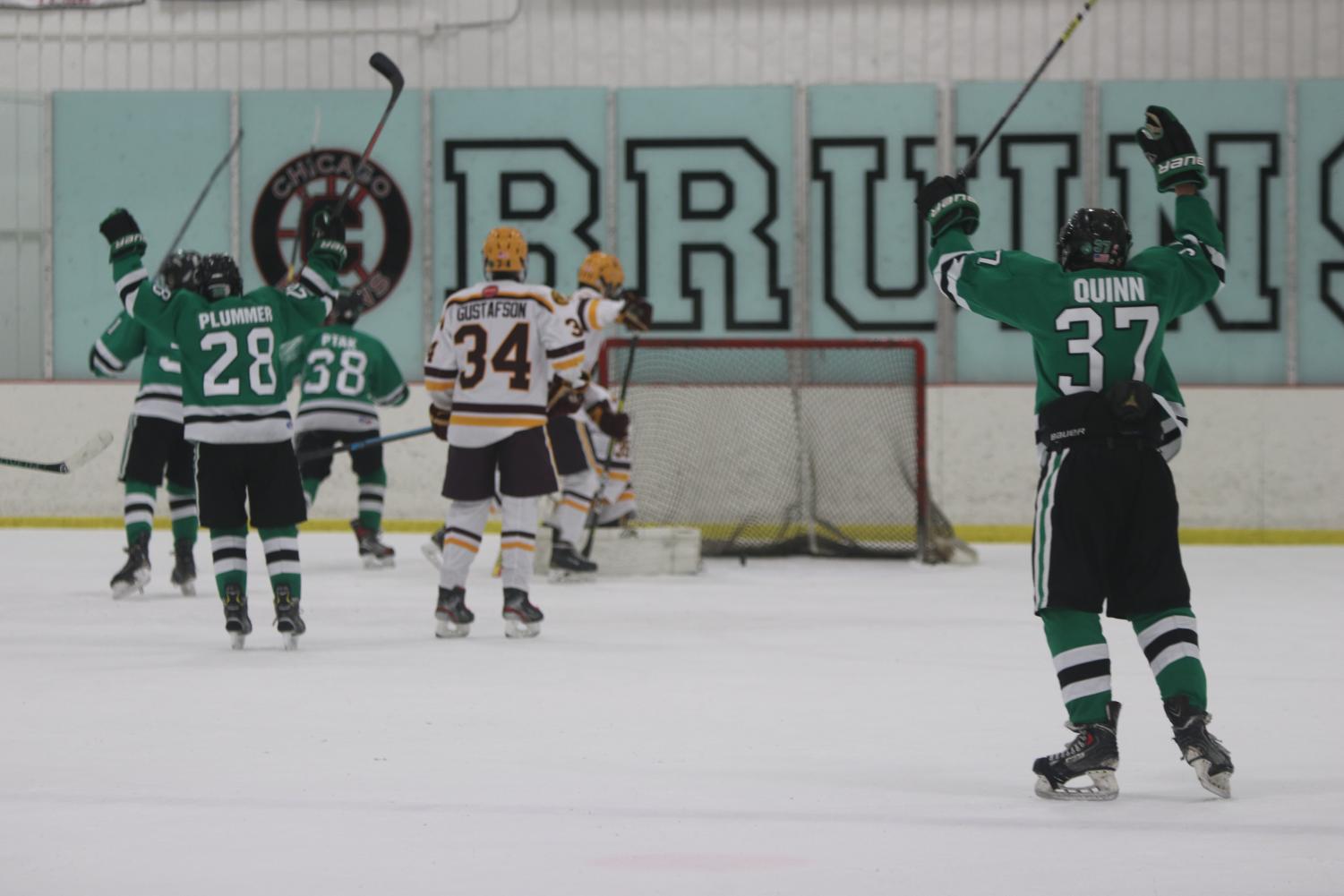 York players raise their hands in celebration after a power play goal was scored to establish a two to nothing midway into the third period. (Photo by Murphy McFarlane)

York players raise their hands in celebration after a power play goal was scored to establish a two to nothing midway into the third period.

JV hockey reinforces their ‘winning culture’ with an undefeated record

Beginning at the same time as the football season and extending throughout the entirety of the basketball season, many students at York do not realize the extent to which the high school hockey season truly spans. With multiple games and many practices both on and off the ice every week, York hockey maintains a devoted rigor to the ice for nearly six months.

As the regular season progresses into the final stretch before state and league playoffs, the JV hockey team has established their dominance in the Scholastic Hockey League (SHL), one of the most competitive leagues in the state, with an SHL record of 19-0-3; the team has never once lost in regulation, an impeccable feat to accomplish so late into the season. Last Fri., Jan. 10 the boys defeated Loyola Academy– collecting one more win for their undefeated record.

“The game plan [against Loyola] was to come in and find our legs after break,” assistant coach Nick Albergo said. “We’ve been out for a while, so coming back to SHL play we really had to get back into our groove.”

While the team came out strong and aggressive, the game remained scoreless in the first two periods. It was only midway through the third when junior Jake Angelucci was able to find the back of the net. Shortly after, a power-play goal was added to the scoreboard. Sophomore Ben Foley remained strong in net with 18 saves to secure an eventual 2-1 victory.

“It was a little frustrating having a tie score going into the third period,” sophomore alternate captain Mike Iorii said. “We’re an all period team if we wanna be. We wanted that third period, and that’s what helped us win tonight.”

The winning mentality exerted at game time is rooted behind a strong dedication to excel long before the puck drop. The team works exceptionally hard in practice and push one another to the next level.

“We’re working hard, sticking to the program and staying together as a team mentally through all our practices no matter how tough it gets,” sophomore forward Ryan Skotty said. “That way we know we’re ready to play when it comes to the games [on] Friday and over the weekend.”

Although, the players maintain a competitive mindset even when they’re off the ice. This year, the program started working out with Patriot Sports and Fitness in Elmhurst. Nick Janowitz, gym owner and former MMA fighter, preaches to “train as if you are the toughest man on the planet.” Janowitz has extensive experience training athletes from a youth level to a professional level.

Each player is different so each player’s workouts are different and are designed to cater to each individual’s needs.” Janowitz said. “Most workouts have a strong focus on a formula I designed years ago called Patriot Volume Training, a lifting method that involves timed exercises so the athlete spends his time working out instead of wasting time walking around the gym.  The team as a whole has a very good work ethic and that’s why they are very good on and off the ice.”

Beyond building their bodies for performance, the boys take extra measures to stimulate their own personal upkeep.

“Our guys are just so dedicated to winning this year,” head coach Matt Boeing said. “They’re taking care of their bodies off the ice as far as nutrition, water, working out at patriot and working out on their own at the local gyms. Everybody is apart of a winning culture this year and it has been great to see.”

The undeniable achievements of this year’s team do not rely solely on one player or one line. Rather, the players and coaches have established a collective understanding to succeed– together.

“I think what’s special about our team is that no matter what’s going on– no matter the period, no matter the score– we always have the same mindset and the same attitude that we’re going to win the game together,” Skotty said. “We can get through anything and prevail in the end.”

Contrary to what most may think, this season has not just been smooth sailing. Like any team, their accountability to one another has indeed been tested through difficult times.

“We don’t consider our team a team, we consider it a brotherhood,” Iorii said. “We play for the person next to one another; it’s a YDH family. We work hard and play hard.”

Proceeding into the final games of the regular season and eventually the postseason, York JV presents themselves as the team to beat– with a bright green target on their backs.

“When playoffs come, it’s a totally different season,” Boeing said. “No matter who we’re playing, we’re going to play like we’re in second place and always fighting for that first spot. We’re looking out for everybody.”

In the end, if the boys remain determined not only just with a strong desire for triumph but a reinforced allegiance to their teammates, they may have the potential to advance very far this postseason.

“Everyone is here to play hockey and they put the team first. We don’t have any selfish players out there,” Boeing said. “They come to the rink ready to win and ready to be a family and that’s what they’re putting first is the front of the jersey instead of the back.” 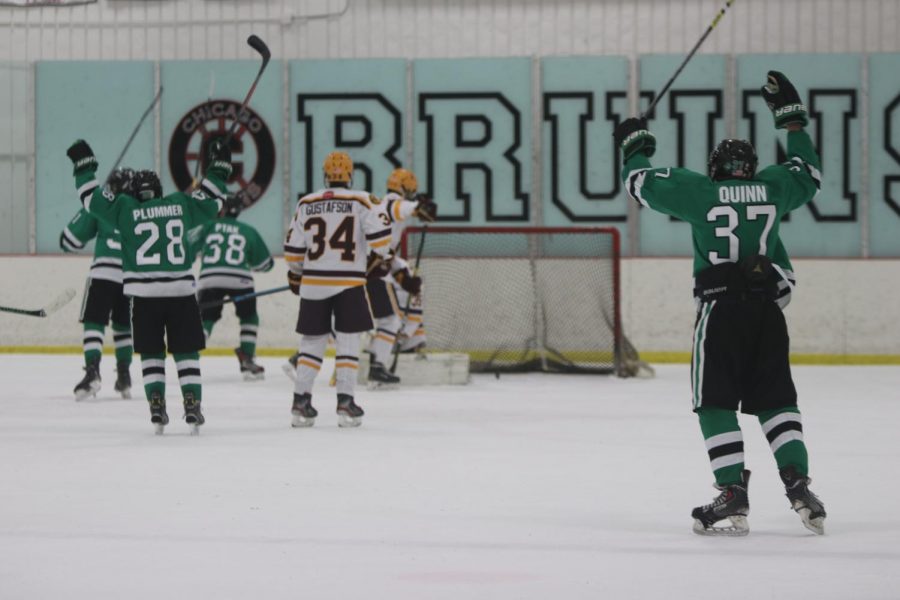 Gallery|10 Photos
Photo by Murphy McFarlane
York players raise their hands in celebration after a power play goal was scored to establish a two to nothing midway into the third period.