Why the Astros’ punishment is soft 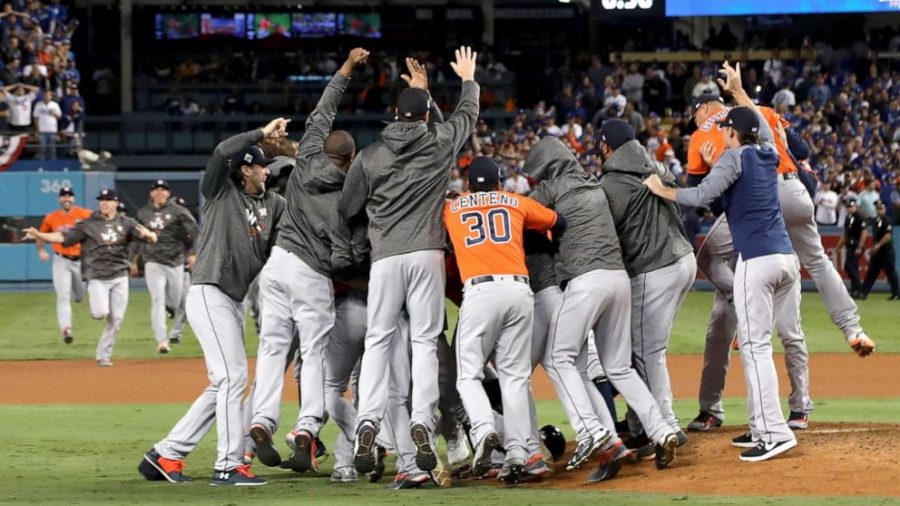 The Houston Astros mob winning pitcher Charlie Morton in 2017 following their World Series victory. However, now a conviction of cheating puts an asterix next to the Astros' title for the rest of time.

While cheating in sports has unfortunately become somewhat of a recurring event, there is an imbalance with the severity of the punishments doled out by the league; some are downright draconian whilst others are softer than a baby’s butt. After pressure from the media and baseball fans across the world, Major League Baseball (MLB) took action on the allegations of the Houston Astros stealing signs during their World Series winning 2017 season. The consequences included: a one-year suspension for Astros manager AJ Hinch, a one year suspension for Astros General Manager Jeff Luhnow, a $5 million fine against the Astros organization and the loss of their first and second-round picks for 2020 and 2021 drafts.

Following this, Astros owner Jim Crane released a statement firing Hinch and Luhnow. When Crane was asked if this tainted the World Series Championship in 2017, he responded “I think absolutely not.” Directly following the statement, Crane received backlash from the entire baseball community. Cries of stripping the Astros of the 2017 World Series title were heard across the country.

On the contrary, some believe that this was a just punishment. I am not one of those people.

On Jan. 13, MLB assessed the report accusing the Astros of using video technology to obtain an unfair advantage throughout the 2017 season. Speculations of the scandal had been seen across Twitter, begun by former Cleveland Indians starting pitcher Trevor Bauer; however, these were pushed under the covers until Mike Fiers, a pitcher for the Astros from 2015 until 2017, claimed that the Astros used the centerfield camera as well as replay video to steal opponents signs during home games. Although Fiers warned other clubs during that season of potential sign stealing, it was not brought to the national scale until recently.

“Respect the integrity of the game,” Fiers said.  “It is America’s Pastime.”

I look at this case as next to identical as the 1919 incident with the Chicago White Sox that was dubbed “the Black Sox Scandal.” Eight players on the White Sox World Series roster took bribes to throw the World Series. They were caught, and these eight players, nicknamed the “Black Sox,”  were banned from baseball for life. This situation with the Astros should be treated the same way, if not worse. The Black Sox altered the outcome of the World Series against their favor and were banned for life. The 2017 Astros altered the outcome in their favor. You tell me what sounds worse. The Astros received all the perks, money and media attention for winning a World Series that they fixed. Why should these two events be treated differently? Because the current system is beyond soft.

“They should have had their entire title stripped because it was an embarrassment to baseball,” senior Will Baumgartener said.

There is absolutely zero reason that Major League Baseball should not have made an example out of the Houston Astros. For starters, the Astros should have been immediately stripped of their title. I understand that this would be controversial, but it is the only way to ensure that no team is willing to exchange a short suspension, a loss of a few draft picks and a relatively small fine for a World Series title. In addition to this, I would have suspended Hinch and Crane for five years each in contrast to the current one year suspension. This not only is detrimental to the team’s future, but also the future of the management or coaches that were directly involved.

“[This scandal] is something that puts a damper on the Houston Astros organization as a whole,” sophomore Max Hansmann said.

Surprisingly, I am in support of something within this punishment; the choice to strip draft picks. Because the draft is where the the Astros, and all teams, continuously get better, it is a good way to prevent that from happening. Last but not least, I would have fined every player on the team 50% of their salary that year because, even if they were not directly involved, they chose to stay quiet about the scandal.

Moral of the story: the Astros messed up bad, and they got off the hook pretty easily. MLB is reflective of our society: a new level of soft.

“[It has been a] terrible two days for baseball,” MLB Network host, Chris Rose said.

Note: This story is an opinion and does not necessarily accurately represent the views of the staff as a whole.