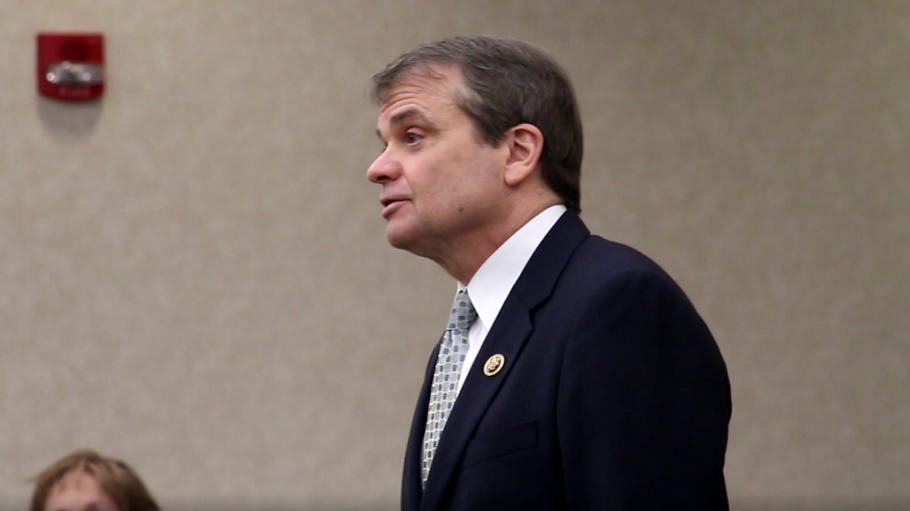 Rep. Mike Quigley (D-IL) speaks before a group of AP United States History students about the topic of impeachment. York was one of several places Quigley visited that day. (Photo by Jack Castanoli)

Rep. Mike Quigley (D-IL) speaks before a group of AP United States History students about the topic of impeachment. York was one of several places Quigley visited that day.

On Jan. 22, Rep. Mike Quigley (D-IL) made his annual visit to York and had a discussion with AP United States History students. During his discussion, he highlighted the impeachment situation and talked about why he was one of the members who voted for both Articles of Impeachment brought against President Trump.

“It started for me in 2016 when we started getting briefed on what the Russians did,” Quigley said. “The Russians attacked our democratic process, and they had help. You can read the Special Counsel’s report about this. The Trump Campaign worked with the Russians to aid the president.”

Quigley was referring to a report released back in March 2019 that detailed the Trump Campaign’s dealings with Russia and the subsequent eleven areas in which the report stated President Trump potentially obstructed investigations into the matter.

“The only reason the Special Counsel didn’t indict the president for conspiracy was because the Department of Justice has a policy that doesn’t allow it,” Quigley said. “And he laid out eleven counts of obstruction.”

Quigley then went on to explain how the president’s phone call and subsequent withholding of aid helped to add to his belief that impeachment was necessary.

“What the president did with Ukraine is, he solicited a bribe,” Quigley said. “He offered an official act, withholding aid, $400 million, to an ally at war with our adversary, Russia. FDR didn’t say we were angry with France, [so] we aren’t going to send anybody to help them because I’m mad at them. He didn’t say, I’m not going to help you if you don’t investigate my political rival, in this case the Bidens. That’s a solicitation of a bribe. That is a crime, and obstructing [the investigation] is another crime.”

Despite the passage of the Articles of Impeachment in the House, the Senate is widely expected to acquit the president. The majority of senators from both parties have already made their decision on whether to remove the president from office, something that is widely attributed to rising levels of polarization. However, Quigley noted that polarized senators aren’t the ones he wants to be considerate.

“Woodrow Wilson said that about 5% of the American public decide every election,” Quigley said. “So when [skeptics] say you’re never going to win the impeachment vote, you’re never going to get two-thirds, in my mind, they are not the ones I’m talking too. I care about four senators developing a backbone to say we want witnesses, we want documents, [and] we want a real trial.”

This is significant because while removing the president would take 67 votes in the Senate, allowing witnesses and documents in the trial only needs a simple majority of 51 to pass, which means those senator’s votes are very important. In addition, Quigley believes that regardless of what the Senate does, most Americans will understand what a fair trial is.

“Most Americans base their law as they should, Quigley said. “They know what’s fair and what’s just. So I’d like to think, we’ll appeal to the better angels of the nature of just enough people to make a difference and move forward together.”

The idea of a small chunk of the American population, historically more moderate voters, was not lost on Quigley as he continued to explain why he believed avoiding political extremes would help the country move forward.

“All elections are decided in the middle,” Quigley said. “[Democrats] won the House through the middle. When I won my special election, Mark Kirk, a Republican, came to me and said, everything that gets done, gets done in the middle. The bottom line is, we are polarized. It’s a difficult time. But we still want to get things done, and that involves compromise.”

Having Quigley speak about both the issue of impeachment and the issue of polarization helped to give students new knowledge about the state of American politics.

“It was really cool to have an insider’s view of [impeachment,]” junior Mustafa Valika said. “It helped me have a better sense of what’s going on with the impeachment process especially since I’m not as well read on current politics as I’d like to be. [Also], when he started talking about overcoming party polarization in the American public, as well as Congress, he kind of opened my eyes to what I see now as a possible solution to deadlock in Congress.”

Overall, the students had a good impression of his speech and felt that he was a very good speaker.

“[Quigley] was a really good speaker,” junior James Golen said. “Sure he was eloquent and well versed, but he was also really engaging and funny. He just seemed like a really personable guy, and it was nice to hear him speak.”