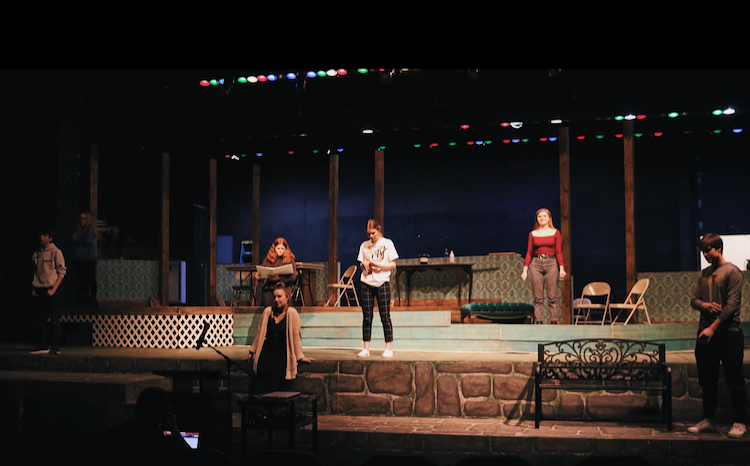 Most of the musicals and plays at York are directed by drama club sponsors John Forsythe and Rebecca Marianetti; however, for this year’s winter play students have had the opportunity to express their own creative input as student directors. This year, the winter festival, “Crazy Uncle Fest”, consists of two plays: a translation of Anton Chekov’s “Uncle Vanya” and a modern adaption of the same story called “Life Sucks.” Both shows were broken up into sections so that each student director can take on a portion of the story.

“We did a section in our summer theater class for the first time on directing,” Forysthe said. “When I learned how to direct back in college, my first directing class focused on a Chekov play. Because they’re so rich there is so much you can get from them, I decided to look at Chekov plays and then have the kids direct these adaptations.”

Although there have been opportunities for students to direct, this the first time students have been able to take on the whole show. Being a director gives students a chance to look at a show in its entirety rather than from the viewpoint of one character.

“I’ve always wanted to be a director,” student director and sophomore actor Owen Espinosa said. “That’s the job I would love, so I think getting the chance to finally direct something on stage is a good way for me to showcase my talents because I don’t get many opportunities to do it.”

Because most shows are directed by one or two adults, having the show directed by multiple students has changed the overall experience for everyone involved in the show.

“The two directors [Forsythe and Marianetti] are very level headed,” Espinosa said. “Of course they’re adults, and they have an idea [of what the play will be] going in. That’s something to learn as directors: how to have more ideas when we go into the scene. The mix of ideas is really interesting and adds a bunch of layers to the scene that sometimes don’t happen in shows only directed by one or two people.”

The ability to collaborate has brought completely new and different ideas to the table.

“Every single director is specific to certain scenes which means that there is so much detail in each and every moment,” student director and actor junior Olivia Rosenberg said.

Most of the students who took on directing roles for this show are typically involved in an on-stage role. The opportunity to direct has taught students what it’s like to be involved in the production from off stage.

“My favorite part was getting to see everything come together as an outsider,” student director junior Jake Downey said. “I usually watched the shows grow and develop from the stage, but to get to watch it all from the sidelines was an incredible opportunity.”

“My favorite part of directing has to be seeing my ideas and input implicated on stage,” Taylor said. “It’s really cool to be playing such an important part in the rehearsal process.”

Although the experience has been positive, there have been a couple of challenges in the process.

“I think the biggest challenge I faced was realizing that something I envisioned may not be what my co-directors did,” junior and student director Meagan Maiers said. “We had to learn to compromise with one another a lot, and sometimes it was hard to let go of ideas that I may have loved.”

Even with challenges present, the students have been able to overcome them and collaborate.

“The biggest challenges would likely be students not wanting to listen to their peers the way they would listen to an adult director, but these kids have been great,” Forsythe said. “The things that we’ve come up with as an ensemble are so much richer and deeper than if I had just directed the individual actors.”

“The most rewarding part is always seeing the wonderful things that the kids come up with,” Forsythe said. “They have done a wonderful thing, and all I do is come in and tweak it a little bit, and it grows into something more, and then they take over. That ensemble, that collaborative quality of theater really came to life.”