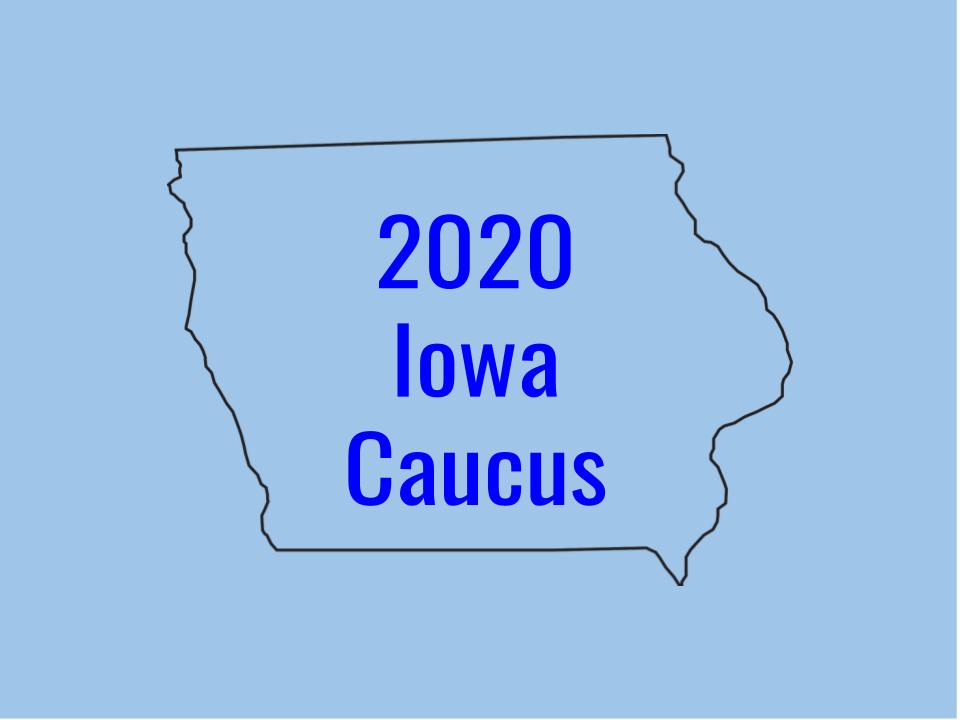 The 2020 Iowa Caucus will be held on Monday Feb. 3. This is the first state for the 2020 Democratic primaries and caucuses. (Graphic by Jack Castanoli)

The 2020 Iowa Caucus will be held on Monday Feb. 3. This is the first state for the 2020 Democratic primaries and caucuses.

The 2020 Democratic Iowa Caucus is set to be one of the most competitive races in history. This election cycle, four candidates have fallen into a 10 point polling difference: Joe Biden, Pete Buttigieg, Bernie Sanders and Elizabeth Warren. Young Politicians Club took note of who they believe will win the Iowa Caucus on Feb. 3.

“I think Joe Biden [will win the Iowa Caucus] because he is the most moderate of the candidates,” senior Calvin Greene said. “I think right now this country needs a more moderate candidate.”

“I think that there are a few candidates who would do well,” junior Ava Uditsky said. “I think Biden fits the Iowa demographic really well: college educated, white voters. But I think Pete Buttigieg’s ground game has been really strong and so has Elizabeth Warren’s, so I don’t doubt that those campaigns could do better than might be expected in Iowa.”

The New York Times/Siena College poll conducted Jan. 20-23 found that of likely Iowa voters: 25% would support Senator Bernie Sanders as their first choice, followed by Pete Buttigieg at 18%, Joe Biden at 17% and Elizabeth Warren at 15%. Biden had consistently lead the polls until Sanders took the lead; many see this as evidence of how volatile the race is. Young Politicians was divided on how Sanders would perform in the caucus.

“I’m not surprised [about recent polling that shows Sanders leading] because of his popularity in the 2016 election, but I don’t know how well he would play out in Iowa just because he’s mostly polling very well among millenials versus the Iowa demographic, which isn’t as skewed towards his base,” Uditsky said.

However, other Young Politicians members had contrasting opinions and saw Sanders as a true viable candidate. After months of Biden having a consistent edge in polling, Sanders has now taken the lead in the Real Clear Politics averages. Sanders has a 24.2% average in Iowa compared to Biden’s 21%.

“I think Bernie does have a chance of winning the Iowa caucus,” Greene said. “If he does win the Iowa Caucus, he might win the nomination.”

New polls from Iowa, New Hampshire, Nevada and South Carolina (four early primary and caucus states) show that the combined moderate trifecta, Joe Biden, Pete Buttigieg and Amy Klobuchar, are polling the same vote share as Bernie Sanders and Elizabeth Warren combined. Some Democrats fear that such a divide within the party could mirror the 2016 democratic primaries, which induced a tempestuous convention. Others believe that the party will be more unified this time around because Democrats have a common goal of defeating President Trump.

“I think the field has been very clear so far in saying that whoever the nominee is, they’re going to be united behind that person,” Uditsky said. “They’ve said that during the debates, and I think that it is a very important thing for the Democratic Party because in order to win in 2020 the party needs to unite behind one person.”