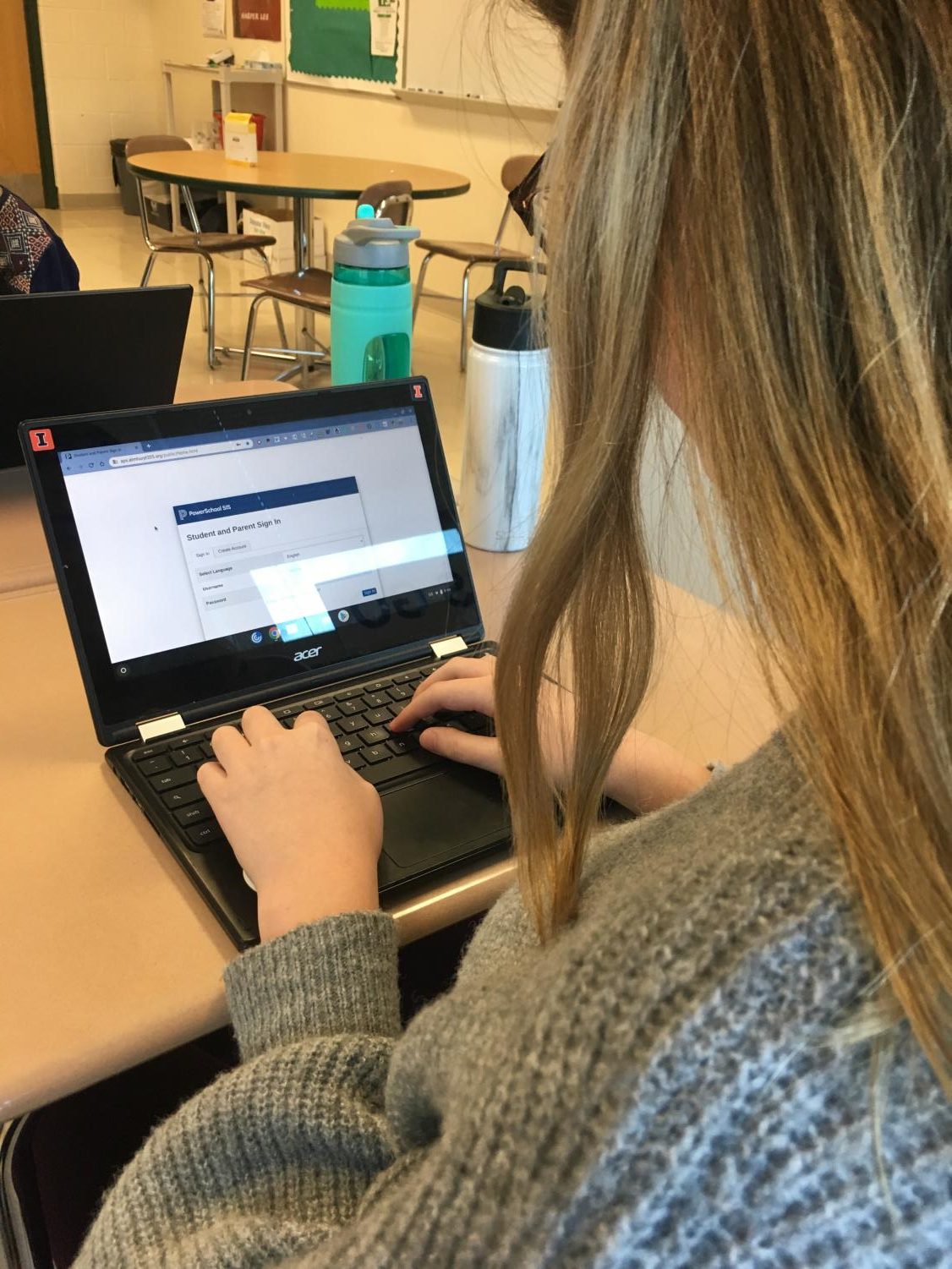 Junior Zoe Daniel checks for grade revisions on Powerschool. Instead of appearing as an A, B, C, D or F, students see the numbers one through four representing their grades. (Photo by Lucy Valeski)

Junior Zoe Daniel checks for grade revisions on Powerschool. Instead of appearing as an A, B, C, D or F, students see the numbers one through four representing their grades.

In its first year, the standards based grading roll-out has presented some challenges at York

Standard based learning uses numbers (one being the worst and four being the best) instead of percentages to determine a student’s overall grade. It also allows students to retake tests, and teachers can only grade homework that is accessed. The system has removed extra credit and academic responsibility, so grades can most effectively reflect a student’s overall grade.

“Standards based grading is about allowing students to have multiple attempts to show their overall proficiency,” AP Micro and Macroeconomics teacher Tamra Carl said. “Standards based [grading] does not allow for homework in the gradebook. In order to be eligible for a retake, students have to turn in a certain percentage of what would be denoted as homework. You won’t be successful in a class like AP Microeconomics if you do not do the work.”

“What we are not going to do is anymore pilots,” principal Erin Deluga said. “We are going to have the staff spend the next three years learning. Currently, the department chairs and teachers are in [the midst of] a learning process for standard based reporting and are looking at the different reporting standards, supporting standards, priority standards and then how that is going to look on the proficiency scales.”

Many students, however, feel that the new standard based grading is confusing and does not tell them what their grade is or how they can improve.

York students also are frustrated with standards based grading because they think it is harder to achieve higher grades.

“It is so hard to get a good grade in class that has standard based grading,” freshman Paige Greeve said. “You have to fit all the criteria. I also have to assume what my grade is since it is determined by R1, R2, R3 and R4, and I often assume wrong and cannot make up that work.”

Test retakes are an important aspect to standard based learning because they allow students to show what they know in case their initial grade did not reflect what they actually learned. However, retakes have presented some challenges to students and teachers. Teachers have to rewrite and rework tests for students to take, and the students have extra pressure to decide whether or not to retake.

“The departments are in different places in how they offer retakes,” Deluga said. “Math is allowing multiple retakes so students have multiple opportunities to learn the material. I think where students are finding it stressful is it an opportunity to gain the system a little bit. That has been tough on both teachers and students.”

It is the first year standard based learning is being implemented at York, and teachers and students still have two more years to understand how the system works and if it will ultimately be beneficial for the school.

“I think the reason is really, truly trying to figure out what students know and [how to] help them grow,” Deluga said. “It becomes more individualized learning.”