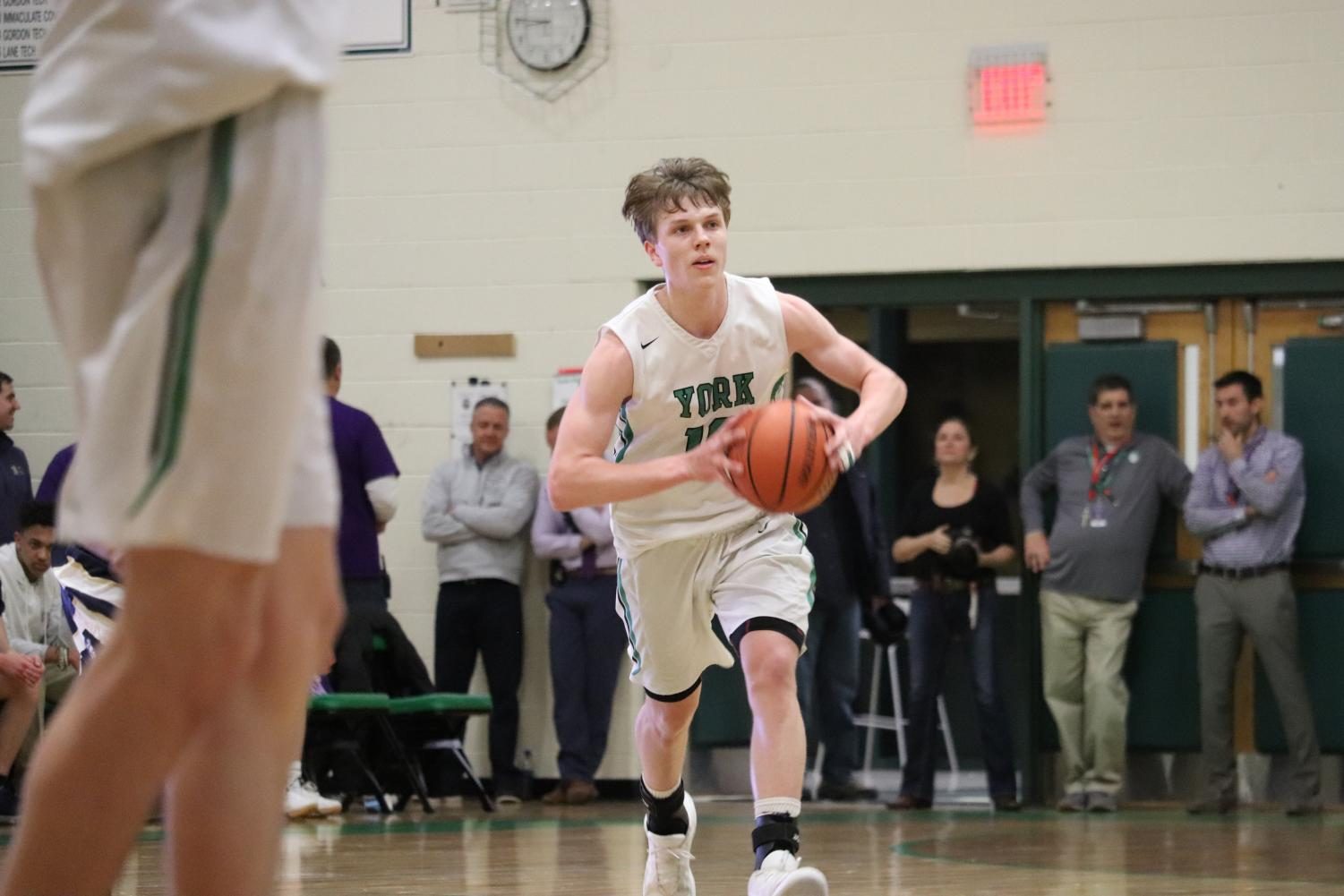 Senior Nate Shockey delivers a chest pass to advance the ball up court.

After a heartbreaking loss to Whitney Young in the sectional final last spring, many fans speculated that York had missed their chance at a state playoff run because they would lose four of their starting five heading into this season. However, that narrative quickly changed as, while basketball is certainly a team sport, one player has stepped up big time and put this team on his back. That man is Nate Shockey. The Dukes made serious noise in their season-opening Thanksgiving tournament at Palatine High School placing second as they fell to Stevenson in the championship game. Although it was a hard loss to swallow, the team would use that as a chip on their shoulder and win their next nine games, until falling to Bolingbrook in the championship game of the Jack Tosh Holiday Classic tournament.

Through his first 25 games this year, Shockey has poured in 20.8 points per game, shooting 69.5% from the free-throw line and hitting 2.4 three-pointers per game, while also leaving his mark on the other end of the floor, where he is averaging 2.3 steals per game. Sure, statistics may be able to demonstrate how well a player is able to perform on his own, but what really illustrates Nate Shockey’s contribution to this team is their overall record: 22-3.

“Coming into the season I definitely wanted to make a big impact on this team and knew I’d have to be a leader,“ Shockey said. “I think my teammates have done a great job of not only allowing me to create shots but also get open and make plays on their own which has helped a lot.”

Basketball is a team sport, and the Dukes certainly wouldn’t be where they are if it was just a one-man show. Another player that has stepped up this season is junior Jeffrey Grace. Grace, who was a role player as a sophomore a year ago, now sees himself as the number two man on this team to Shockey, who he has bonded and grown with over their time together.

“Nate and I have always been tight, going all the way back to the days of playing together in elementary school at Lincoln,” Grace said. “I’d say we’ve really always been cool with each other since we got to playing together both at York and for our AAU team we truly bonded. I love having him around he’s always there for me and puts in his best attitude and effort every night.”

Another that has played a key role in Nate’s success is his mindset. Going into every game knowing that all eyes will be on you, keeping a clear head is not easy. In fact, despite the numbers he has been putting up this season, Shockey has seen his fair share of “overrated” chants in opposing gyms.

“I’d say, because of both the gym and the team, that Oak Park-River Forest is the hardest place to play at,” Shockey said. “It’s a much different environment over there. They have a different court then us, it’s made of rubber instead of wood which makes it even more awkward and different. I’ve never won over there, so hopefully this year we can change that.”

While he may have been a strong contributor to this team a year ago, Shockey took a backseat to a loaded senior class, led by Erik Cohn and Nick Kosich, who are now playing at the college level. However, he couldn’t have fit in better as he was able to average over ten points per game and showed signs that he had the talent, knowledge, and intensity to step up and be the leader of this team in the future.

“I thought he did great last year, he was a very balanced scorer on a team that had four guys averaging double-digits,” head coach Vince Doran said. “We knew we were going to need him to take a lot more shots. The big difference between last year and this season is that last year, he had teammates who could go for 20 [points] on their own. Whereas, this season, his teammates are very unselfish and are looking to get him the ball.”

While some may not have expected the Dukes to be in their current position or that Shockey would’ve taken this leap forward in his game, one school did: the University of North Dakota. As a member of the Summit League, UND saw the potential in Shockey from last season and elected to offer him a full-ride to play for them. Shockey announced via his Twitter that he committed to UND on Sept. 9, of last fall, as he liked what he saw in the school.

“I think the thing that was most appealing to North Dakota was that he was a part of a winning program and able to play great team basketball last season,” Doran said. “Now, this season, he is the focal point for all of our opponents and still doing quite well.”

Being a focal point for his opponents means that Shockey has had to deal with double-teams, traps, pretty much any defensive scheme to possibly slow him down and force others to beat them. This clearly hasn’t phased Shockey much though, because on Jan. 21, in a game at Proviso West, he scored his 1000th career point. He is just the seventh player to do so in York history, and the third in the previous two seasons.

“It’s a lot, honestly. When I found out I was really shocked,” Shockey said. “Going into the season I thought I would struggle to get to that mark. I just have to thank my coaches and teammates for drawing up plays, putting their trust in my hands, and believing in me to get to this point.”

It’s only mid-February, so the last thing on Shockey’s mind right now are his recent accolades and future career. The meat of the basketball season is just ahead as the Dukes will see the remainder of their schedule against conference opponents before postseason play will begin. Shockey, along with the rest of the team, is focused on the present.

“We’re trying to win as many games as possible, especially after knowing that most people thought this was going to be a down year for us,” Shockey said. “We have a better record at this point than we did last season, which is really an awesome accomplishment. We are just going to continue giving our best effort and hope to continue winning.”