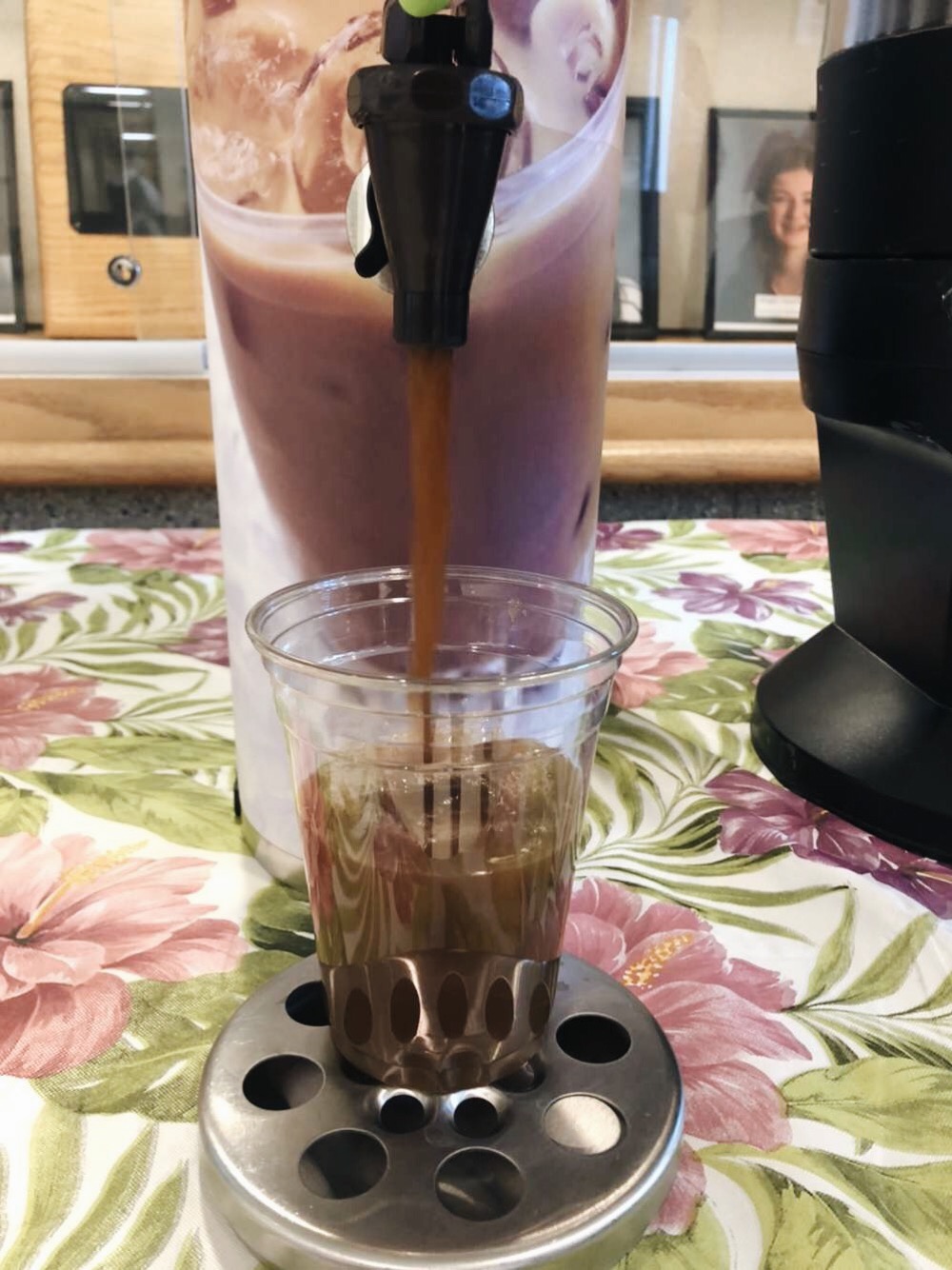 A student pours themself a cup of almond mocha iced coffee from Ms. Vanessa's stand during a lunchtime passing period.

The truth about teen coffee addiction

If you look closely, you begin to notice how big of a role coffee plays around the school. People can buy it almost every period of the day. Students come in late to class holding enormous Starbucks cups. Even friends of mine would complain about being jittery and tired when they don’t have a cup first thing in the morning. Here I am, completely baffled over why all these teenagers were so dependent on their daily cup of joe, and why most of them couldn’t seem to give it up. This begs the question: can you truly get addicted to coffee?

I’m no saint; I love to spend my weekends at Starbucks. For me and my friends, it functions as a home-base whenever we go downtown, because we always end up back in the cozy coffee shop for a frappe. The teenagers there seem to outnumber adults. A school-wide survey concluded that 30.6% of York students have two to three cups of coffee in a single day.

56.8% of participants drink it to help them wake up in the morning. Coffee contains a natural stimulant called caffeine, and smaller amounts can be found in soft drinks, chocolate and tea. The average 8-ounce cup contains 100 milligrams of caffeine. The stimulant increases alertness and concentration. It has never truly been proven whether or not it’s possible to become addicted to coffee the same way you can get hooked on drugs, but 58% of professionals believe that you can become dependent on coffee, and the effect it has on your brain during consumption and withdrawal is strikingly similar to that of addiction.

Students at York revealed in the survey that when they don’t have their coffee, they feel “fatigue, headaches,” “anxious, sleepy”, and “’irritable”.

“I drink about three cups a day, and  I started when I was seven,” freshman Jojo Pagen said. “I saw my mom drinking it… so I thought I’d try it. I really liked it. I didn’t know you can become dependent on caffeine. For certain people, it might be, but for me, it’s not.”

Frequent and continuous coffee consumption changes your brain chemistry. According to PubMed Central, caffeine’s chemical structure bears a resemblance to adenosine, a molecule that affects the central nervous system by giving it a relaxing sensation. Your brain may start to produce more adenosine receptors and in turn, you start drinking more coffee to get the same caffeine fix you had previously. Abruptly cutting off the supply makes you feel tired and irritable, which explains why most java-drinkers are so reluctant to give up their favorite beverage.

“I started drinking coffee freshman year, and I have five K-cups a day,” senior Sophia Dagres said. “I can’t function without it. In the morning, I can’t go to school without a cup of coffee in my hand. In the beginning, I didn’t really like it, I just drank it because it would keep me up, but it’s an acquired taste. Now I prefer black coffee over water at this point.”

It’s no secret how much people love their caffeine. Brazil is the world’s largest coffee export producing 2,592,000 metric tons of coffee per year, or over 5 billion pounds. 400 million cups of coffee are consumed every day in the United States alone (Huffington Post), but that could be bad news for the environment.

”16 billion paper cups are used for coffee every year, which leads to 6.5 million trees cut down, 4 billion gallons of water going to waste, and enough energy to power 54,000 homes for a year goes to waste,” says Greenmatch, an eco-friendly energy company.

Coffee growing and production uses an abundant amount of water. A recent study by the Water Foodprint Network estimated that it takes 140 liters of water to grow, process, and prepare a single cup of coffee.

“It’s… providing a negative influence on our teen years, considering we’re getting addicted to caffeine now instead of what our parents did, which was getting addicted later in life,” said Sophia Rosak, freshman.

So should you never drink another cup of coffee again? That’s up to you; drinking coffee is not necessarily a bad thing. A cup here and there is not going to completely ruin your brain chemistry or cause the end of the world, but understanding the side effects of chronic consumption will prevent a caffeine dependency.

“Especially in your teen years, your health is really important and is impacted by what you consume, and consuming a lot of an addictive chemical can have negative repercussions,” Rosak concluded.