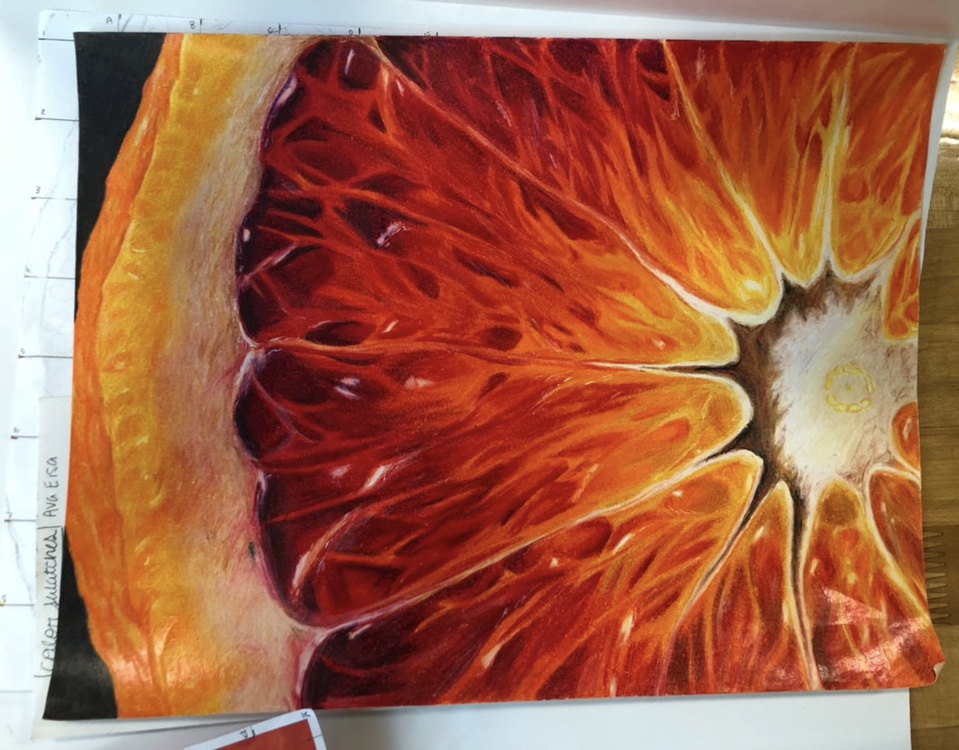 As part of one of her freshman year art classes, Ava Eisa drew a close up picture of an orange that was displayed in the commons during an art show. (Photo courtesy of Ava Eisa)

As part of one of her freshman year art classes, Ava Eisa drew a close up picture of an orange that was displayed in the commons during an art show.

In fifth grade, most future York students were coming home with misshapen pottery projects and self-portraits that barely resembled them; however, in fifth grade, sophomore Ava Eisa was producing realistic drawings that would put some high school students to shame. Ava Eisa’s fascination with art was sparked by several people during her childhood.

“I took private lessons with [a teacher named Elise] and I loved her. She was super sweet and she got me into drawing realistic things and improving my skills so she was probably the number one thing,” Ava Eisa said. “I would always ask [my babysitter] to draw pictures because she went to York and took AP Art so she was all into that stuff.”

As the first-born, Ava Eisa’s mom, Cheryl Eisa, was unaware of her daughter’s special talent. In her mother’s mind, Ava’s ability to create art was comparable to any other kid that age until she was able to see the art made by other children. At that point, it was clear Ava Eisa’s talent was unmatched by most kids her age.

“At first I thought her artwork was typical for her age, but then I started to see other children’s work,” Cheryl Eisa said. “I knew then she had a special gift.”

“[Ava] came to my class with some obvious interest and practice in drawing, but really blossomed due to her fantastic attitude towards her learning,” Antonson said.

Sophomore year, Ava Eisa enrolled in a sociology class, an elective that has very little to do with art; however, she still managed to incorporate her talent in an end of the year project. As part of her TED talk assignment, Ava Eisa focused on the benefits of art therapy and incorporated some of her own pieces in it.

“I guess it’s just a way to express yourself, there are so many different kinds [and forms],” Ava Eisa said. “It’s a way to put your feelings in a physical form.”

Ava Eisa doesn’t know what role art will play when it comes to her future plans once she graduates from York. As an upperclassman, she plans on taking AP Art and participating in the annual art show at York. Despite not knowing if she wants a career in art, Ava Eisa doesn’t want to stop producing art and using the talent she has.

“I don’t want to stop, I want to keep doing it whether it’s a part-time thing or a big part of my life,” Ava Eisa said.