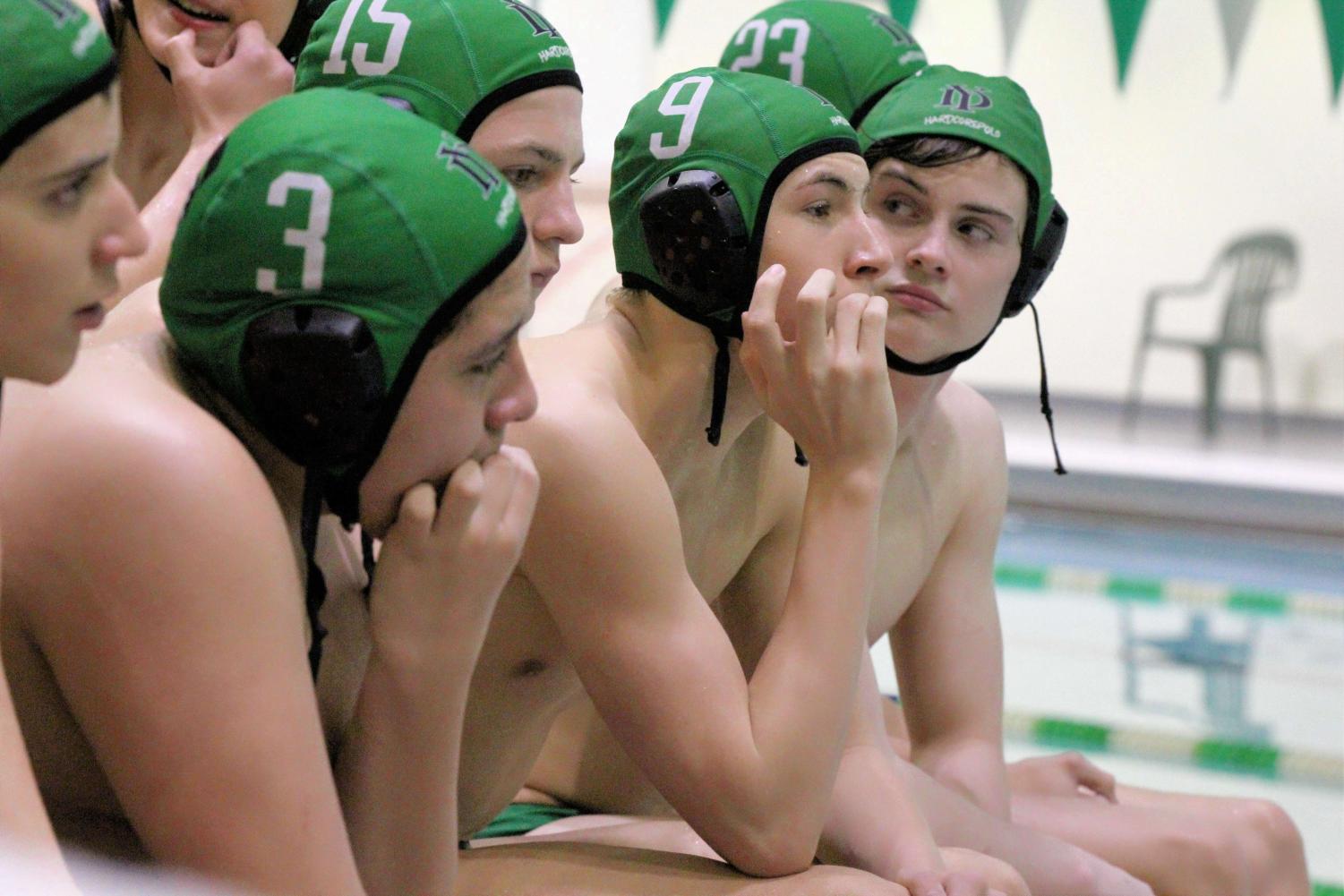 The boys water polo team was one of the only spring sports teams able to compete in a game before all sports seasons were suspended. (Photo courtesy of HR Imaging)

The boys water polo team was one of the only spring sports teams able to compete in a game before all sports seasons were suspended.

No days off: Spring sport athletes continue training despite the suspension of their seasons

During the month of March, students witnessed the rapid growth of a virus, formally called COVID-19, across our country, waiting to see how it would impact them.

The week of March 9 consisted of many announcements, beginning with the notification of an e-learning plan in case COVID-19 prompted school cancelation; therefore, it was no surprise when most students opened their emails on March 12 to see a new update. At 6:20 in the morning on Thurs., March 12, District 205 suspended all after school activities district-wide including athletic seasons, most of which barely began.

As expected most athletes were beside themselves, teams only played a few games if any at this point.

“When I first found [sports] were suspended, I was heartbroken because I love playing lacrosse and my team,” senior Sami Kraus said. “We have been working so hard all off-season in order to continue our success.”

Most athletes shared a similar reaction to Kraus, their teams worked hard months before tryouts to ensure a prosperous spring season. As a result of the suspension, many athletes took this new information with a grain of salt and continued as if the next day their season would resume and they would have to compete as if they never stopped.

“I am more motivated than ever to keep grinding and keep maintaining [my physical] shape to be the best athlete I can be this season,” senior baseball player Santino Domingo said.

The unknown brings a lot of fear to many people at this time; however, for motivated athletes who hope their season will return, they are ensuring they will be ready to play. Most athletes have resorted to daily workouts consisting of runs, weights and other routines they find beneficial.

“I lift and run most days,” junior volleyball player Sam Walsh said. “It’s important to stay ready to play in case we are able to go back into our season.”

For spring sports such as water polo, the extent of their workouts mainly consist of what Walsh is doing. The lack of facilities for such sports to be played has been difficult during this time. Those who possess the means to practice their sport at home are taking advantage of it during their days off.

“I have my own net to hit and pitch in my backyard as well as my dad to help me practice fielding,” sophomore softball player Kara Jensen said.

While coaches are prohibited from having organized practices, many are still fulfilling their responsibilities recommending workouts they can do on their own. Workouts consist of timed runs, circuits, lifting and more.

“I’ve been doing recommended workouts from our coaches on my own time,” senior track member Adam Stevenson said. “Since the competing season is suspended doesn’t mean you can stop working hard.”

While athletes are using these workouts to stay in shape, many are using it to also remain positive and hopeful for what the future brings for their season. Sophomore Troy Walker has high hopes for the boy’s lacrosse team once they can return to playing together.

“I am staying positive by working out,” Walker said. “I need to be the best I can, so we can potentially put a run in for the state championship.”

Many students, who now have a plethora of free time without practices and sports, have used this to regroup and spend time doing things that busy schedules prevented them from doing prior to this.

“I’ve been doing a lot of self-care,” senior badminton player Aleksina Jovic said. “I’m doing things I’ve been wanting to do for a while but haven’t had time to do.”

With increased measures being taken by the district and the state, most of these students are at home with their families with not much to do but spend time with them.

“I am staying positive by spending time with my family,” sophomore soccer player Jaylene Hernandez said. “We play board games and we watch family movies together with snacks.”

“I set goals for myself to keep a positive attitude around the situation,” Hausoul said. “I want to go back stronger than ever.”

Junior Ellie Bernard worked with her brother to create a temporary mini gym in their home when the weather prevents them from running outside. Bernard, a varsity lacrosse player, wasn’t pleased to hear the news of her sport being suspended, but she’s aware of the motives.

“I’m trying to stay positive by understanding the circumstances for the situation,” Bernard said. “Everything is being done in order to ensure our safety.”