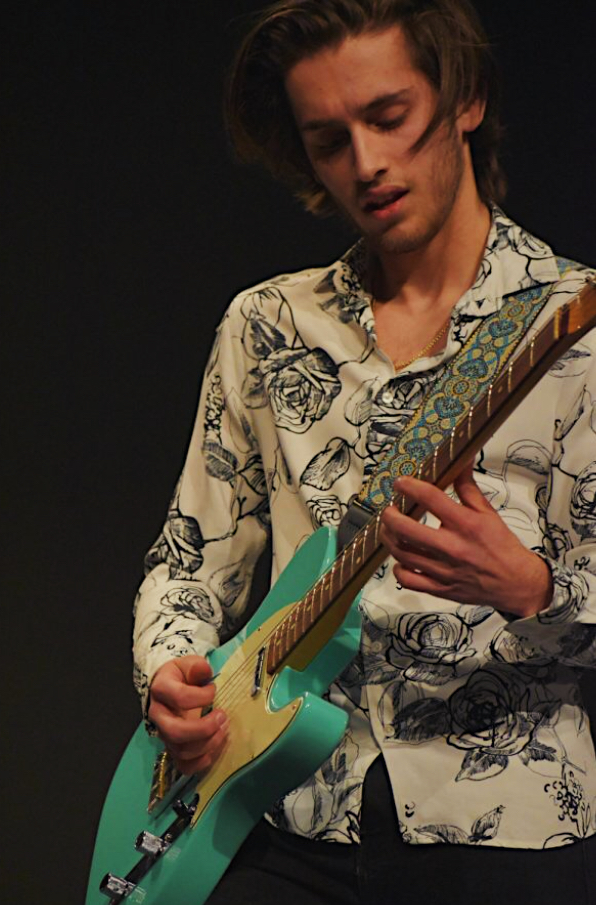 Junior Anthony Poli performing during York Live, Friday, March 6, 2020, 2 weeks before people began to quarantine. "It's pretty cool to have an outlet like music and so much stuff that's undiscovered. There is always something new to learn," Poli said. (Photo By Lucy Valeski )

Junior Anthony Poli performing during York Live, Friday, March 6, 2020, 2 weeks before people began to quarantine. "It's pretty cool to have an outlet like music and so much stuff that's undiscovered. There is always something new to learn," Poli said.

Creators under quarantine: Students keep their passions alive during the pandemic

As of Friday, March 20, Illinois was put under a stay-at-home order until the end of April. York’s performing arts department is full of creative opportunities and outlets for students. Since the students and staff are unable to attend school to maintain social distancing, many students are not able to take advantage of the resources and environments they creatively thrive in.

York Drama’s production of ‘Jesus Christ Superstar’ was set to open on April 16, but it is currently postponed. While the cast and crew cannot rehearse in person, they have been finding ways to still stay in touch with each other and the show.

“We’ve been constantly communicating through Facebook,” cast member and junior Nev Lawless said. “Whether it’s talking to each other or sending videos or music. Personally, I spend a good amount of time on it because, although we are away from each other, there’s so much work to be done. I spend time either going through our score reviewing the music, watching videos of the dances and reviewing them, or just going through my notes to remind me of important moments in the show,” Lawless said. “Not only do we spend time physically working on the show, but we also send weekly emails to our director, (Rebecca Marianetti) to answer questions about the show that keep us mentally involved as well.”

Students are missing their time in rehearsal and the solutions are still not perfect, however, senior cast member Aidan Frank is remaining positive about the show during this uncertain time.

“Virtual rehearsal is not the same and you miss your friends and everything about the show. It’s not great, but I’m hopeful that we can figure something out for the summer.” Frank said.

Junior Anthony Poli has been playing guitar for five years;  he dedicated his 5th and 6th period to creating in the studio with his friends every day, not having this period to create is a change for Poli, but he still finds ways to make valuable use of the time at home.

“I have a lot more time to practice,” Poli said. “There isn’t an excuse when you’re on lockdown to not practice. Instead of practicing one hour a day, now I practice for about three or four. I can’t complain though because having an outlet like music and guitar is almost never-ending. After five years I still can’t get enough, and there is still so much to learn and discover.”

Being away from school also led teachers to find new ways to keep their students engaged. York dance teacher Michelle Jensen focuses her time on finding ways to keep her students moving outside of the dance studio. The dance students have been participating in a variety of dance-related assignments such as dance research projects and warm-up and Choreography videos for students to follow at home.

“I belong to a national dance organization which has provided me with lots of support and ideas,” Jensen said. “I would much rather be in the Black Box Dance Studio in live time with all my students, moving through space. Isn’t that what dance is? Present moment movement expression? Fortunately, technology today allows for some unique ways for people to stay connected.”

Music Production teacher Chris Gemkow’s main focus is having his students continue to produce. Gemkow has no plans to delay the release of the annual York Album project; he anticipates a virtual release party if necessary. The students involved in the album project held their first live stream concert last week on the album project Instagram, @yorkalbumproject; they plan on doing more in the weeks ahead.

“I’ve been trying to stay in touch with as many musicians as possible,” Gemkow said. “My goal is to make sure my students know that we’re still releasing the York Album Project. Whether we’re stuck at home, or able to return to the music lab, we can still write and release music and collaborate virtually.”

So, while the creative process has changed for everyone, it is not stopping students from following their passions and continuing to do what they love.

“We are in a very tough situation right now but the best we could do is make the most of this time we have on pause. So try to still stay involved in what you love and keep safe,” Lawless said.