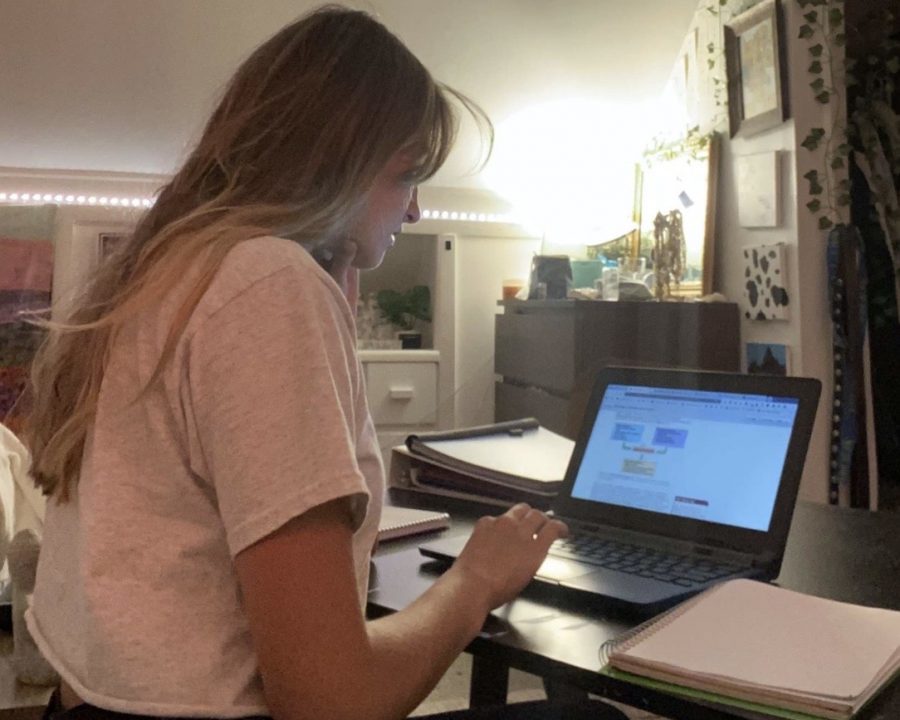 Senior Allie Sidio works on schoolwork asynchronously from the comfort of her home.

York students lament the loss of human (and internet) connection during the first week of remote learning.

The historic first week of the 2020-21 school year occurred completely remote due to the COVID-19 virus. Everyday, York students attended four synchronous class periods over Zoom beginning on Tuesday Aug. 25; the foreign form of learning came with both challenges and benefits.

In a survey of 100 current York students, respondents were asked about their experience with the first week of remote learning. Here were the top responses:

There are technology issues on both sides.

Most York teachers worked from their classrooms. Therefore, teachers were logged out of their Zoom classes when the WiFi went down at York every day of the first week, leaving their digital classrooms unsupervised. Many students used the opportunity to take a break or complete homework, but some classes watched movies, socialized or played video games together.

Students also experienced connection issues at home. When they had poor internet access, many students reported difficulties hearing or understanding the teacher. Some were kicked out of the Zoom call altogether and never let back in. The lack of internet connection also affected the microphones and cameras, leaving communication in classes or breakout rooms impaired.

“My WiFi is weak because of my other family members working from home,” sophomore Kadie Julian said. “When the WiFi at York went down, we [the class] just sat in the Zoom, and the hosts played Netflix over screen share.”

The school days are shorter.

The first period of the day begins at 7:40 a.m., and the final period concludes at 12:35 p.m. (compared to the normal 3:06 p.m.). Students indicated in the survey they were grateful for the shorter days because it gave them an opportunity to complete homework, have more free time, receive help from teachers and manage difficult classes.

“I can do more things and explore more interests in the afternoon since we are done with synchronous remote learning earlier in the day,” sophomore Sydney Lee said.

Staying engaged in class is a challenge.

The survey asked students to indicate their ability to remain focused in class on a one to five scale; one meant they could not stay engaged at all, and five suggested they focused better in Zoom classes than in person. Most students fell between two and three (73 out of 100 surveyed); however 21 students placed themselves at four. Only one person responded with their engagement as a five and five respondents reported as a one.

One reason why students struggled with class engagement fell on the seventy minute class periods with five minute breaks between. Students found it difficult to stay engaged while looking at a computer screen, often for four periods in a row. Many wrote they were grateful for teachers who gave them breaks halfway through the period or let them leave class early.

“I don’t like how short the passing periods are,” junior Mira Shortt said. “I also wish there was more asynchronous time.”

Some students also expressed their disappointment with the lack of hands-on learning. Naturally, access to special resources such as computer labs, libraries, music rooms and industrial tech facilities are limited or nonexistent, making the learning experience more difficult or less effective.

Learning at home is more comfortable.

Many students said they liked being able to sleep in before class and not have to get ready to leave the house. Some mentioned they felt more comfortable going to class in their home (and sometimes even from their own bed!).

Remote learning makes it difficult to form connections with teachers and other classmates.

Students and teachers alike miss forming connections with one another, and the impersonal Zoom classes do not fill the void. Students reported finding it difficult to meet people in their classes this week. Many found the breakout rooms to be ineffective and awkward.

“I dislike the lack of interaction with classmates that can occur because of Zoom calls,” sophomore Veer Sule said. “In regular class, you are able to talk with friends during some activities, but in Zoom, this is limited. Yes, breakout groups do alleviate this somewhat, but it is just not the same.”

Some survey respondents wrote they had a difficult time asking questions in class because of both technology issues and a lack of comfort and confidence in the remote calls. Students may not know their teacher or members of the class, so they felt uncomfortable speaking in class over Zoom or asking questions.

“I dislike how impersonal it is to do virtual learning,” junior Erin Lindgreen said. “I haven’t been able to get to know my classmates to form study groups.”

Remote learning presented many difficult decisions and conflicts throughout the first week. However, teachers, students, administrators and parents alike have been encourage to remain flexible and adapt to this new form of learning for a successful school year- regardless of how many times they see “your connection is unstable” on their monitor.

“I think it [remote learning] is the best option at the moment with an understanding of trying  to get everybody back in school,” York science teacher Amy Moss said. “I get to see you guys; it is not perfect but at least I get to connect with you as students, and you get to know me. I think it is a hard situation, and everyone has to just respect each other.”

Elephant in the ZOOM: A deeper look into how students handled the first week WiFi outages

Throughout the first week of school, typically at 10:40 a.m. each day, teachers were not always sure how to handle the frequent loss of internet connection at York. One moment, a teacher would be in the middle of delivering a thoughtful lecture; the next, the teacher was suddenly off the call, and a randomly selected student became the new host.

Although students were unsure of how to handle the internet crashes, each classroom had its own way of dealing with the situation.

One of the solutions to this reoccurring issue is video games. One student screen shares the game they are playing and creates a gaming experience for the entire class.

It is not uncommon to see students share the game they are playing with their peers. In many cases, reentering the classroom to see a student streaming will not make for a happy teacher.

“When [the WiFi] went out yesterday, the person who became the host started screen sharing and playing Tetris,” freshman Reilly Costello said. “And then the teacher came back and got very mad. LOL.”

However, it made for a great way for students to bond throughout the first week of school. Although each student may not be enthusiastic about Algebra AB, like Costello, they will certainly find some kind of joy in a simple online game.

“Well, our WiFi just went out during P.E. and we had to do a workout from home,” sophomore Reese Pavlik said. “Right as he ‘lagged out’, some guy turned on his camera and started playing “Call of Duty: War Zone” to show the entire class.”

Some students search for entertaining and new ways to spend the internet crashes, including a birthday celebration.

“Today, when the WiFi crashed, I was in my math class, and the teacher was kicked out,” senior Haley Brown said. “It was a student’s birthday, so [senior Tessa Olson] became the host and shared her screen. She played ‘Happy Birthday’ while we all sang; it was hilarious.”

A different response to the WiFi crash, but, nonetheless, a productive way to form relationships with new peers.

“It was funny and honestly, one of the best bonding experiences I’ve had with other students over Zoom in my classes,” Olson said. “It was much less awkward than the breakout rooms.”

An attempt at normalcy

Despite the common stories of hectic internet connection crashes, in many cases, students simply resumed class as normal. In some scenarios, students even share their work related to the course.

“In Drawing 1, these girls started talking in front of the whole class,” senior Caitlin Maguire said. “One girl pulled out her clay walrus and started showing everyone.”

Many students even continued presentations if they were near completion.

“I was presenting in Anatomy and Physiology,” senior Maddie Brown said. “Once my presentation was over, I muted.”

Although the first week of school was filled to the brim with internet connectivity issues for students and teachers alike, it has not stopped students from continuing to learn and enjoy themselves during class. Despite classes not going exactly as teachers planned, the week one goal of bonding was, nevertheless, accomplished.