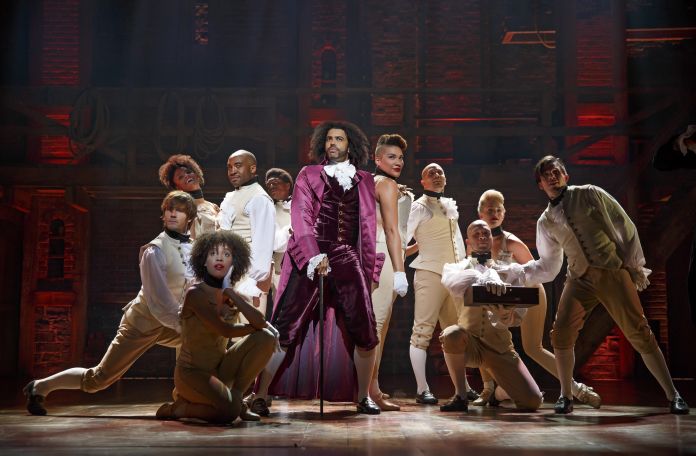 The opening number of Act Two of “Hamilton” stars Daveed Diggs as Thomas Jefferson in “What’d I Miss”. (Photo courtesy of Broadway News)

The opening number of Act Two of “Hamilton” stars Daveed Diggs as Thomas Jefferson in “What’d I Miss”.

“I may not live to see our glory. But I will gladly join the fight. And when our children tell our story, they’ll tell the story of tonight.” – Alexander Hamilton

On July 3, 2020, viewers all over the world settled into their couches, waiting for the curtains to rise on the Richard Roger’s stage in New York City. A hip hop musical showcasing the stories of the Founding Fathers would soon captivate the entire globe yet again. This was not a new fad; in fact, Hamilton has been the talk of the town since 2015 when creator Lin Manuel-Miranda brought it to the public. At the 2016 Tony Awards, it received 16 nominations and took home 11 awards, including Best Musical.

The musical follows Alexander Hamilton’s life, but focuses on his rise to power in the American government. The story begins with a 19 year old immigrant trying to make a name for himself and ends as the audience is left with the legacy that same man created. While we see Hamilton climb to the top, the audience simultaneously follows the story’s villain, Aaron Burr; the musical is a balance of the two as we see them chase each other to success.

The show was filmed in front of a live audience which captured the energy that live theatre harbours. The streaming service Disney + was chosen as the home for film. Show director Thomas Kail revised his role as he brought the piece to the screen with help from cinematographer Declan Quinn. By creating an accessible version of the hit Broadway musical, thousands of people who didn’t have the opportunity to view the story were given the chance to experience the magic. While it was the film version, it still contained every moment that enticed fans to keep coming back for more. It was not just an adaptation, the Hamilton film was a moving snapshot of the musical that rocked the world.

The film version brought more opportunities for the audience to pick up on nuances the actors perfected throughout their time with the show. The feelings of anguish, pride, excitement and determination displayed on faces could be clearly understood and brought more emotional depth to the production. The audience is able to make new discoveries from the alternative perspective the film brings. Phillipa Soo’s Eliza was noticed to be the quiet narrator as she took the hand of the viewer and guided them through the twists and turns of history. Christopher Jackson became the fearless leader we looked for as soon as he made his entrance as George Washington. Thomas Jefferson, portrayed by Daveed Diggs, was not only the witty Founding Father who’s rap verses had the audience captivated, but he was also the ambitious and vengeful antagonist who appeared just as Hamilton began to make strides. Leslie Odom Jr. brought every single dimension possible to the role of Aaron Burr; many viewed him as simply the murderer of Hamilton, yet Odom showed that he was a man who felt deeply and honestly.

While Lin Manuel Miranda’s performance as Hamilton was faltering at times, he was still the mastermind behind the project and kept the wheels turning. He took the story of a man we only knew to be on the ten dollar bill and turned Hamilton into one of the most well known tales in the modern century. He introduces the audience to these flawed men that founded our country in a way that showed the humanity of the past. Miranda’s portrayal wasn’t perfect, but neither was Hamilton himself. He even highlighted the strong, female powerhouses who reclaimed their place in the creation of the country.  Miranda transformed the story of Hamilton into a piece of history retold with sensational performances and brilliant writing.

Though it is the story of slave-owning, white men, the complete cast of non-white actors reclaims the story as one of determination and hope.

“It takes on a different meaning when you see black and brown performers telling the origin story of our country,” Miranda said. “This is a story about America then, told by America now”.

Especially with the political and social climate taking our country by storm, Hamilton was the story about aspiration and perseverance we were all in desperate need of. The show emphasized the idea that American history isn’t an inked textbook, but an incomplete mural with thousands of artists still adding their own design. As Hamilton himself sings, “America, you great unfinished symphony”.