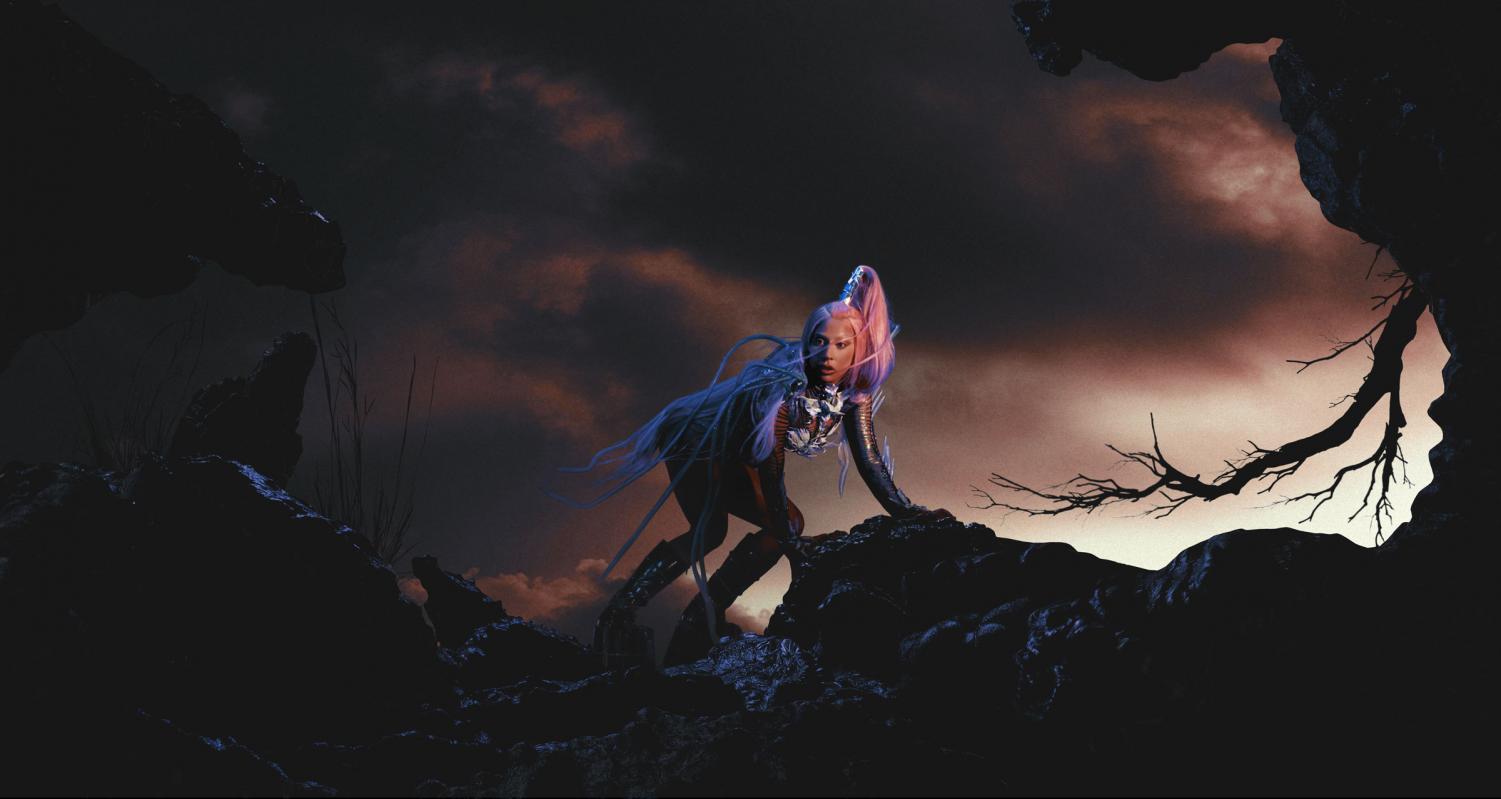 Lady Gaga released her sixth studio album “Chromatica” on May 29, 2020.

“Chromatica”: A comeback album from an artist we never forgot (review)

This past May, after almost four years of inactivity, Lady Gaga released her sixth studio album, “Chromatica”. Despite the seven week delay due to COVID-19, the album debuted at the top of the Billboard 200 chart, making it Gaga’s sixth consecutive number one album. She is the the eighth woman to hold such a title in the United States. What is it about Gaga’s music that keeps fans always coming back for more? The answer to that question lies within the lyrics.

“I think Gaga has become something bigger than herself, and even her music,” senior Charlie Kungl said. “She’s become a symbol for so many people of solidarity and uniqueness. She’s proven time and time again with each album her musical range, succeeding in both country/folk music, 2010s pop, jazz and in the modern age, which is really tough. It’s her first pop album since ‘ARTPOP’ in 2013, and she is  back and as good as ever. Gaga proves time and time again that she can change with the times, and that is what makes her so special and so integral to American music.”

In her work and in the media, Gaga has never been one to shy away from being open about her emotions and struggles with mental health. “Chromatica”, of course, is no different. Gaga channels her insecurities through the planet of Chromatica, the place where she feels her creativity flows. Gaga explains that on that planet where she lives and breathes, there is no inequality, but only acceptance of all. Gaga used this album to help alleviate her pain. Her lyrics tackle all kinds of emotional trauma: PTSD, sexual assault, and objectification. The album could not be more uplifting. Gaga combines a multitude of music styles and beats to create the most victorious album of her career.

“I think that the beginning of the album really symbolizes, for me, what I would call the beginning of my journey to healing, and what I would hope would be an inspiration for people that are in need of healing through happiness, through dance,” Gaga said in a Variety interview with Ellise Shafer.

Gaga uses “Chromatica” as an opportunity to return to her earlier roots, like the pop and EDM influences used on her first album “The Fame”. Much of Gaga’s career has been built upon genre experimentation, but “Chromatica” is a complete return to the earlier days of Gaga, but more cinematic. Gaga begins the album with “Chromatica I”, the first of three orchestral tracks on the album, all of which paint the planet of Chromatica out for her listeners. Gaga then flows immediately into the next song, setting up a pattern in which all songs begin and end seamlessly with the one before and after it. Then, “Stupid Love” and “Rain on Me” follow, two of the most popular songs of the summer.

“‘Stupid Love’, for me, feels like a song that my friends and I would jam out to in the summer. That feeling when you’re driving with the windows down, the sun is setting, and you’re singing your heart out– those are the best kinds of summer nights,” junior Megan Doan comments.

Instant radio hits like “Rain On Me”, which features vocals from Ariana Grande and debuted at the top of the Billboard charts, are good to some but typical to others. Despite the song’s generally positive reciprocation, some long for a step away from Gaga’s classic pop style.

“‘Rain on Me’ was a decent upbeat summer song, but definitely not her best song,” junior Annalise Belzile said. “[Her best songs] are when she showcases her classical training with less theatrics.”

For those who prefer Gaga’s more calm and classical vocals, this album might be more pop than you’d prefer. The album’s A Side, beginning with “Chromatica I” and ending with the Euro-disco powerhouse “911”, dons hard-hitting beats, vocals that sound robotic at times and angelic at others, and elements of 80s and 90s psychedelic pop. Side B then takes over, introducing the world to the new, improved, and more powerful Lady Gaga.

Side B takes the pop and EDM style of the previous tracks to the next level, introducing more synth pop, more electropop and even more of that fun and energetically pure sound provided from the first half of the album. Gaga also makes her lyrics more about transformation in this half, using songs like “Enigma” and “Replay” to address relationship woes and the mystery behind her new persona. Both songs, like many more on this side of the album, make you want to get up and dance.

“I think that Enigma has such good vibes. I feel like I’d probably have this song in a dance party playlist,” junior Megan Doan said.

Gaga features both South-Korean girl group BLACKPINK and pop icon Elton John on this side of the album. “Sour Candy” featuring BLACKPINK talks about demolishing the idea of a quiet, demure woman and making room for a more powerful one. The song also features lyrics in South Korean and English. “Sine from Above” features Elton John and discusses the healing power of music within Gaga’s life. Like all other EDM songs on the album, it includes elements of other genres, like trance and electronica, and provides Elton John with his own verse on the song.

“I feel like the use of the featured artist BLACKPINK in the song Sour Candy was an amazing choice,” senior Meagan Maiers said.  “Both artists complement each other while bringing something different to the song, and both have different backgrounds and styles, like BLACKPINK being a Korean girl group. It was really cool to see two different artists come together to create something together.”

At its core, “Chromatica” is unlike any other album Gaga has released. It represents a shift within not only herself but her career, as she returns with influences from her past and brings to light the person she hopes to remain in the future. Every song on the album is triumphant, every word powerful, and every note the perfect encapsulation of what Gaga has suffered through throughout her life and how she’s coming to terms with this person she wants to be. This album is applicable to every person’s own mental health journey, regardless of age or sex or race, because all people suffer in similar ways. Lady Gaga has worked hard to help others understand that it’s okay to be vulnerable.

“If you’re listening to this album and you’re suffering in any type of way, just know that that suffering within itself is a sign of your humanity and you are not broken,” Gaga said. “You are connected to the whole world and we are one giant body. We are one full entity. ”

“Chromatica” is available on all music platforms now , and albums are sold both online and in many major stores.