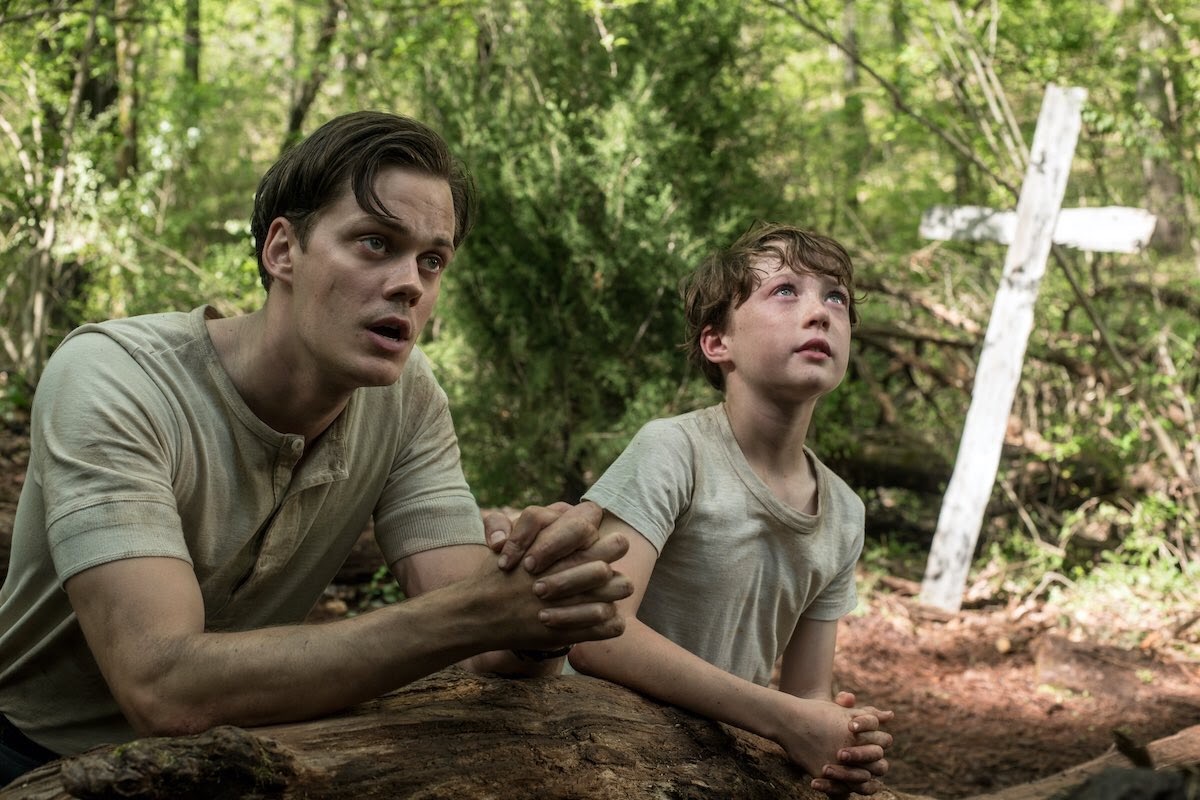 Bill Skarsgård, best known for his role as Pennywise in “It” (2017), portrays Willard Russell in Campos’ new Netflix feature, “The Devil All The Time”. His screen time was limited to the first third of the film, where he was a World War II vet suffering from PTSD and the father of young Arvin Russell (Michael Bands Repeta). (Photo courtesy of Radio Times)

Bill Skarsgård, best known for his role as Pennywise in “It” (2017), portrays Willard Russell in Campos’ new Netflix feature, “The Devil All The Time”. His screen time was limited to the first third of the film, where he was a World War II vet suffering from PTSD and the father of young Arvin Russell (Michael Bands Repeta).

Before logging onto Netflix Wednesday afternoon, I only knew “The Devil All The Time” as ‘that movie with Spider Man’. However, Antonio Campos’ film was one of generational pain, stemming from both violence and religious zealotry. It is a movie absent of both heroes and villains; every character is a product, and eventually a victim, of a mid-twentieth century West Virginia culture. The film is based on Donald Ray Pollock’s novel of the same title.

“Unless he had whiskey running through his veins, Willard came to the clearing every morning and evening to talk to God,” Pollock wrote in the 2011 novel. “Arvin didn’t know which was worse, the drinking or the praying. As far back as he could remember, it seemed that his father had fought the Devil all the time.”

“The Devil All The Time” follows an orphaned Arvin Russell (Tom Holland) as he tries to protect his stepsister Lenora (Eliza Scanlen) from bullying and violence in their small town. The movie is filled with shocking gore and suspense as it navigates multiple timelines, beginning with Arvin’s father in World War II. The dark thriller focuses on multiple perspectives including a murderous couple (Riley Keough and Jason Clarke), the unnecessary Sheriff Lee (Sebastian Stan), the delusional Reverend Preston Teagardin (Robert Pattinson), Arvin’s deeply religious father Willard Russell (Bill Skarsgård) and, of course, Arvin Russell. Arvin is exposed to violence and religious fanaticism from a young age; his father teaches him to always hit back and plead to God at the base of a cross. The film is riddled with tragedy beginning at the first five minutes (and it never lets up).

“It’s a film in which everyone is talking to God, but he doesn’t seem to be there,” Campos said in an interview with Variety. “I’ve always been interested in observing fanatical behavior and the anxiety that comes with the absence of God as opposed to the presence of God. I wanted to explore how some people of faith abuse their power. So many of the tenets of Christianity are good, and many of the characters represent that, but there’s another side.”

With so many characters spanning over two generations and three decades, the set up for the synopsis lasts well over the first third of the two hour and 18 minute runtime. “The Devil All The Time” does an excellent job setting up its characters in the first act; so much so, the characters and plot within the middle and final acts of the film are slightly underdeveloped and spread thin. The viewer investment in Alvin often felt dependent on Holland’s attractive and innocent features, instead of actual character depth or development.

Shot on a film camera, “The Devil All The Time” captures the sinister energy of a small West Virginia town riddled with religious extremists and families impacted by tragedies. An upbeat score and borderline melodramatic screenplay compliments the eternally gray skies and foreboding woods of Knockemstiff. Suspense was always captured on screen in some way; often I realized what would happen just a split second before it occurred.

Is the movie too dependent on violence and grit? I would say so. The shock factor of many gory deaths made for an entertaining, edge-of-my-seat viewing experience that always pushed the film’s central themes. I finished the film knowing exactly what it was about; it gave the viewer no room to think or even care about the characters after clicking off. Humor and character moments were sacrificed for disturbing displays of violence.

Every actor gave a unique and lively performance despite a lack of character substance and screen time. Holland led “The Devil All The Time” with energy; his Arvin always second guessed his instincts but continuously followed through with his affinity for violence in the face of conflict. Pattinson as Reverend Preston Teagardin was borderline campy, with an underlying darkness you could never trust (his opening scene was my favorite in the film). The pain of Skarsgård’s Willard, a vet coping with PTSD and trying to reach out to God even though he only knew his wrath, was always engaging and palpable throughout. The other performances, from Keough and Clarke as charming serial killers to Scanlen’s painfully lonely Lenora, were convincing and contributed to the ensemble piece. Some of the Southern accents used throughout the film did drop at times, especially with Pattinson.

“I’ve got to say I was really nervous and scared coming on set for the first time because I didn’t know if I had it in me to play this type of character,” Holland said in an interview with Variety. “He is a really complicated character and it is very dark, and I had to go to places mentally that I didn’t know I could go to or don’t think I ever want to go to again.”

At one point in “The Devil All The Time”, Lenora visits her mother’s grave with Arvin and says “You ever think about how we both ended up as orphans living in the same house”. This scene best explains the title of Campos’ psychological thriller. Both characters experienced tragedy caused by national violence and extremist religious demands. Their pain was generational, passed down from father to son and father to daughter like genes. Paranoia of the devil and all evils was instilled in every generation, so the devil lay within the ones who feared it most.