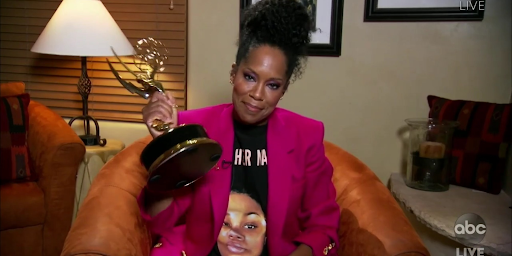 Actress Regina King poses with her award for her role on “Watchmen” after giving an acceptance speech. (Photo courtesy of ABC Television)

Actress Regina King poses with her award for her role on “Watchmen” after giving an acceptance speech.

This past Sunday, the 72nd Primetime Emmy Awards were broadcast live from the Staples Center in Los Angeles and hosted by television personality Jimmy Kimmel. Due to coronavirus, the Television Academy brought the Emmys home to the nominees, creating a more intimate and laid back atmosphere than in past years.

As expected, COVID-19 demolished any hopes of red carpets, pre shows or a live audience for this year’s ceremony. Kimmel himself was present at the Staples Center, while the nominees remained dressed up at home, where they were given professional mics, cameras and lighting to create easy transitions between the various winners and presenters. Despite the insane amount of technology needed to record, the show aired with ease, creating only a few minor hiccups along the way.

When the nominations were announced on July 28, fans were enraged at the exclusion of certain stars whom they felt deserved to be nominated or even win. People felt shows like “Outlander” and “Pose” were viciously ignored, as well as actors Bob Odenkirk, Rhea Seehorn and Tom Pelphrey. Nevertheless, television fans tuned in to watch the night’s big wins, and the majority of them ended up being extremely pleased by the results.

This year’s ceremony broke records left and right. The limited series “Watchmen” led the night with 26 nominations and 11 wins. Fan-favorite Regina King won for Best Actress in a Limited Series for her role on “Watchmen”, beating top competitor and fellow nominee Cate Blanchett for her first American television role in “Mrs. America”.

One of the most talked about wins of the night went to Zendaya, who made Emmy history as the youngest actress to win Best Actress in a Drama for her role as Rue in HBO’s smash hit “Euphoria”. The 24-year-old actress beat out an impressive group of women for the award: Jodie Comer, Olivia Colman, Sandra Oh, Jennifer Aniston and Laura Linney. Fans took to social media with excitement, shock and adoration at Zendaya’s win, both because of her age and her being only the second black woman to win the award.

“I think Zendaya as a person is just incredible,” senior Juliana Suarez said. “Since she was on Disney Channel, her skills and talents have grown so much, and I’ve loved being able to watch that. She is truly deserving of this award and to be making history with it.”

The next major record breaker came when Canadian comedy Schitt’s Creek, whose sixth and final season aired this past year, won seven primetime wins and nine overall, setting the record for most wins by a comedy in one year. “Schitt’s Creek” lead actors Dan Levy, Eugene Levy, Catherine O’Hara and Annie Murphy took home awards for their performances, shocking fellow nominees and viewers alike. Dan Levy himself won three awards for his acting, writing and directing work on the show.

Viewers were shocked when “Schitt’s Creek” beat out top competitor “The Marvelous Mrs. Maisel”, who has dominated the awards over the past two years, with a whopping 16 Emmy wins overall and 54 nominations. “Mrs. Maisel” flaunted 20 nominations this year alone but only brought home four.

“Our show, at its core, is about the transformational effects of love and acceptance, and that is something we need more of now than we’ve ever needed before,” said “Schitt’s Creek” actor and co-creator Dan Levy said.

“This is such a very nice moment. But it’s sad not to be with the cast and crew to share it,” Armstrong in his acceptance speech.

The show also recognized African American representation in Hollywood. The ceremony presented more awards to black actors than ever before. Regina King and Zendaya were among this group of actors rewarded, alongside Uzo Aduba, father and daughter Ron Cephas Jones and Jasmine Cephas Jones, Maya Rudolph (who took home two awards), Eddie Murphy and Yahya Abdul-Meteen II. Ron and Jasmine Cephas Jones became the first father-daughter pair to ever win in the same year.

Despite pleasing fans with so many shocking yet satisfying wins, the one major hiccup of the night came during the In Memoriam. Fans were upset by the exclusion of some more recently deceased stars from the lineup. While the late Chadwick Boseman, Naya Rivera, Regis Philbin and Kirk Douglas were honored, Nick Cordero, Kelly Preston and Kobe Bryant were left out. Fans called out the Television Academy for neglecting these three stars specifically and were particularly upset that Academy Award winner and star basketball player Bryant played for the Los Angeles Lakers at Staples Center.

“Ummm @TheEmmys how do you manage to leave out Kobe Bryant from the In Memoriam while filming at Staples Center,” said one fan on Twitter.

For television fans all over the world, this year’s ceremony proved triumphant. Not only were fans pleased with the results of each category despite initial hostility, this ceremony also gives promise to the ease with which future awards shows, like those set to air in the first half of 2021, can operate. Now more than ever, fans will be watching television and movies closely and become more invested in these awards shows than ever before.