This Is York • September 25, 2020 • https://thisisyork.org/29566/opinions/what-did-supreme-court-justice-ruth-bader-ginsburg-mean-to-york-community-high-school/ 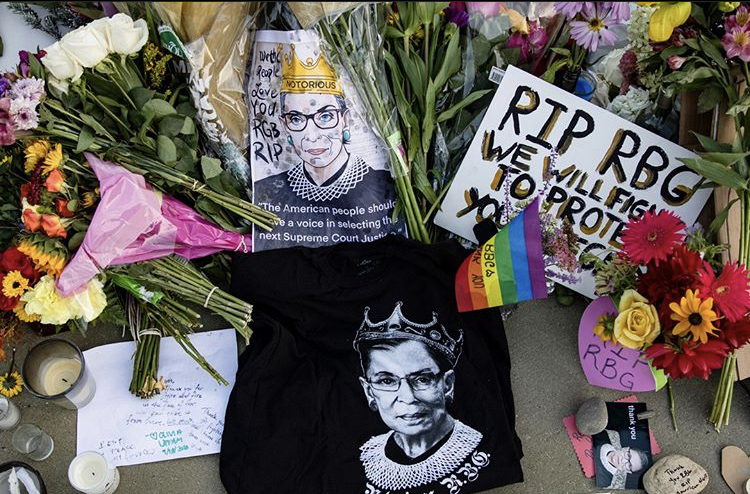 Mourners gather outside of the Supreme Court following the death of Justice Ruth Bader Ginsburg. They left flowers and signs in tribute to the American feminist icon. Ginsburg became the first woman and first Jewish person to lie in state at the United States Capitol.

Supreme Court Justice and American icon Ruth Bader Ginsburg died at the age of 87 on Friday, Sept. 18, 2020 in her Washington home after battling pancreatic cancer. Justice Ginsburg, often referred to as “the Notorious RBG”, paved the way for women in law as the second female Supreme Court Justice. She was a trailblazer for women’s rights, including eliminating gender discrimination in the workplace and reproductive freedom. Ginsburg often argued in favor of LGBTQ rights such as the legalization of same-sex marriage in 2015 and banning workplace discrimination based on sexual orientation in 2020. She was constantly invested in her work; she wrote scathing dissents that changed laws and scarcely missed a day on the bench even after the death of her husband or while receiving chemotherapy. Ginsburg accomplished gradual change through passionate work and ceaseless fighting for gender equality.

Regardless of age, gender, ethnicity or sexual orientation, Ruth Bader Ginsburg contributed to and bettered the lives of United States citizens. York students and faculty expressed in a survey what the Notorious Ruth Bader Ginsburg meant to them. Here were the responses:

“To me, Ruth Badger Ginsburg was not just a symbol of success or the product of perseverance and determination, but an advocate for the voiceless. [Ginsburg] fought with grace and passion and persisted in light of any challenge that came in her way. She was ridiculed yet continued on. Anytime I have been told I could not do it, or that I am not good enough, or that I am not smart enough, I know it is not the end of the story. Ruth persisted, and so will I.”

“RBG spent her entire career attempting to ensure equality for women under the law.  She was an amazing role model, demonstrating that any woman can achieve any and all of her goals.”

“Ruth Bader Ginsburg has always been a huge inspiration for me. I have always admired her will and incredible strengths. As a Latina woman, I truly appreciate the remarkable work she has done and how hard she’s fought for women’s rights. RBG was a force to be reckoned with.”

“Obviously RBG is unbelievably important to me because she is the reason I have many of the rights I do now. More than that, she showed me I really can change the world, and one person can actually make a difference.”

“RBG was an amazing human being in so many facets of life.  However, for me personally, being the father of two young girls, it gives me an opportunity to show them a tremendous example of a strong woman.  Unfortunately, there are not as many strong female role models in our society as I think there needs to be for young women to look up to.  As my girls grow up, I will be able to reference RBG to them as a strong, passionate woman who fought for her beliefs and was determined to leave the world a better place.  I tell my daughters, and the athletes I coach that they should leave every place better than they found it.  RBG did just that.  She lived her life to the fullest, and she has truly left our country and our world a better place.  Now it falls on our shoulders to pick up her torch and continue to leave this world a better place!”

“She fought for the women’s rights in the workplace and was a very strong advocate for women. This really impacted my life because she fought for women’s strength and rights which I really appreciate. Before Ruth Bader Ginsburg, women could not sign mortgages without a male cosigner; she protected pregnant women in the workplace, and she advocated for women serving on juries. I value the importance of all these things.”

“RBG was and remains a hero in my eyes. She broke boundaries that limited women and forged a path for others to follow in her footsteps. From attending Harvard Law School to becoming a female professor at Rutgers and Columbia Law School to becoming a Supreme Court Justice, she accomplished more in her lifetime than seems even imaginable. Her sense of fearlessness as a female in a male dominated world is awe inspiring. She is proof that we all need to believe in ourselves and use our powers for good. She is proof that America depends on individuals using their voice and standing for what they believe in.”

“She was a beautiful strong woman among a world of men, proving that a woman can stand her ground and lead.”

“I really liked Ruth Bader Ginsburg. Although I have never really heard of her until her death, I admire what she was fighting for. She fought for gender equality, women’s rights and LGBTQ rights, at least that is what I have heard, and I support her for that.”

“For me, Ruth was security. She fought for all. With her gone, I now feel scared and alone. I know the powerful people in this world will use their power to hurt, and with Ruth gone, it is clear that they will.”

“She made a huge impact on women’s rights and has done so much for equality. She has inspired me as a girl to be a better woman and not live in the norms that society has told us to live by. “

“Ruth Bader Ginsburg was a role model to all. “The Notorious RBG” will always be remembered as an inspiration, especially to girls and women who have big dreams and aspirations. She moved mountains so I can have the same opportunities and protections to realize my dreams. One of my favorite quotes from her is, “Women belong in all places where decisions are being made.” Her work as a lawyer and a Supreme Court Justice made it possible for women to have equal opportunity as men. That was not true of generations before mine.”

“Ruth Bader Ginsburg was and will always be an inspiration to me. She dedicated her life to championing gender equality and rights for all. It is very special and meaningful to have someone fighting for people everyday and being so passionate about it. She empowers me to always be proud of being a strong woman and to be a voice for others that are being suppressed. She is one of the inspirations that made me want to go to protests and advocate for people no matter their race, sexual orientation, gender identity, etc. I will forever be thankful for Ruth Bader Ginsburg for all she has done for me and millions of others and will always remember her and her legacy.”

“I never really knew what she did, but I have heard things about how she played a big role in women’s rights and civil rights. From what I have heard, some of these things might not have happened without her. So I respect her for that.”

“I was first introduced to Ruth Bader Ginsburg when I was maybe 7. I was leafing through a probably out-of-date kid’s encyclopedia when I came to the section about the US government. I remember that there was a picture of the Supreme Court justices, with their names listed above. I looked over them, noting their black robes and that they seemed to all be men. I read through the names, Chief Justice Roberts, Antonin Scalia, Stephen Breyer, and then I saw the name “Ruth”. “But wait, Ruth is a woman’s name?” I thought to myself, with stunned glee. “There’s a woman that’s on the Supreme Court?!” I looked again, and sure enough, there she was, sitting on the very end, frilly lace collar adorning her robe. I could feel her gently commanding presence through the page. I was 7 so I didn’t quite know what the Supreme Court did, but there was a woman on it, and while I didn’t necessarily see myself in her robes, for a 7-year-old to know that it was possible that a woman could be up there with all of those men was very powerful. I learned more about RBG as I grew, and I was surprised time and time again by her strength. She had gone through so much, losing her mother at a young age, being told that she couldn’t, she was asked to justify her place in law school, she survived multiple bouts of cancer and yet here she was, fighting for justice and the rights of people because she felt so strongly that it was her job to do so. She argued multiple cases in front of the Supreme Court as a young lawyer, made friends across the aisle once she got there, dared to suggest that the Court would have enough women when there are nine, and continually stood up for what she believed in, writing fiery dissents that crowned her “The Notorious RBG”. She was so incredibly intelligent in her judicial strategy as a sex discrimination lawyer, the basis of many of the rights that women have, we owe in a large part to her. Thank you for everything Ruth. You inspired generations of people, many of them young women like myself to stand up for what’s right, to find a way in the most difficult of circumstances, to pursue legal careers. You will be missed terribly. I hope you rest with a crown on your head, and I hope that we can make you forever proud.”