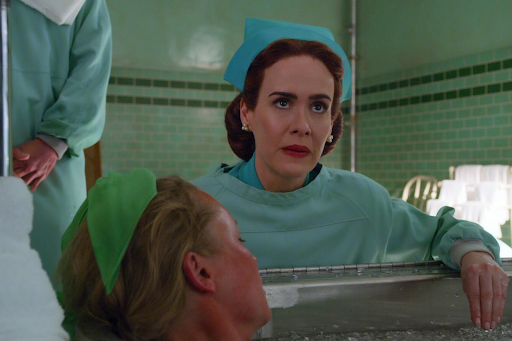 Still of Sarah Paulson, who plays Nurse Mildred Ratched, as she tends to one of her patient’s diagnosis. (Photo courtesy of Netflix)

Still of Sarah Paulson, who plays Nurse Mildred Ratched, as she tends to one of her patient’s diagnosis.

In both the literature world and previous year’s curriculum for a tenth grade English student at York, Ken Kesey’s 1962 novel “One Flew Over the Cuckoo’s Nest” is a classic. It tells the story of Randall P. McMurphy, a delinquent who finds himself trapped in a psychiatric ward. There, he is tormented by Nurse Ratched, the head nurse of the facility. In the book and the 1975 film adaptation of the same title, not much is known about antagonist Nurse Mildred Ratched at all. Her past is as mysterious as the motivation behind her unwarranted and torturous treatment of her patients. Television creators Ryan Murphy and Evan Romansky took advantage of the abundant unknowns and created “Ratched”, the new Netflix series that gives a wild origin story to an infamous villain.

When sophomores at York are introduced to “Cuckoo’s Nest”, it isn’t often with a focus on Nurse Ratched. Rather, English teachers take a dive into the flaws behind the mental health system of the 1950s, like the horrible patient treatments and flawed diagnoses. Nurse Ratched is the antagonist, but there is no in-depth analysis of her. The television series focuses on how her position of power as a woman is perceived by the men around her.

“The book itself is a super interesting take on mental asylums and the world their patients live in,” junior Annalise Belzile said. “In it, the Nurse is always painted as the villain, or someone trying to prevent the patients from entering back into the real world.”

When people first read the book or see the movie adaptation, they probably find themselves wondering why Nurse Ratched is so cruel. She’s become a representation of how society isn’t always the kind, welcoming place people believe it to be.

“It’s painted as if she almost doesn’t want the patients, most of whom are only in the asylum because they go against society’s version of ‘human’. She uses her cruelty to morph her patient’s beliefs to line up with what is normal in society. She’s a very interesting representation of societal norms,” Belzile said.

In “Ratched”, Murphy and Romansky made it their goal to humanize such a famously heartless woman. They created a backstory in which Nurse Ratched slowly becomes a monster due to the societal abuse and neglect she faced early in life. Murphy cast his muse Sarah Paulson in the lead role, an actress known for taking on challenging and daring roles. Paulson believes Ratched is anything but the villain we see her as.

“In my opinion, she was treating the patients the best way she knew how,” Paulson said in an interview for Elle. “I really think she probably didn’t have many options available to her in terms of how best to manage the men in that ward. I mean, her patients were all men, and her bosses were all men.”

It’s safe to say that “Ratched” turned out to be unlike anything viewers expected. As is typical with many of Murphy’s productions, the storyline bit off more than it could chew. The viewer’s experience became disrupted by the pointless subplots and supporting characters thrown in. I was thrilled to finally be getting answers about the early life of a character I love, but what Murphy and Romansky came up with was directionless, repetitive and predictable. The first five or six episodes were beautifully detailed and thought out, yet the ending looked nothing like how it began. I ended up with even more questions than I had at the start.

There were plenty of positives in the show. Visually, “Ratched” is absolutely stunning. Even the title sequence carried such beauty and symbolism. There were stunning aerial shots of the California coast and intricate set decorations that beautifully matched the time period. The show is even scored like an old forties film. While I was watching the show, there were multiple places where I kept rewinding the scene to watch a particular cinematographic moment over and over again, especially when those moments used color.

Color was the strongest purveyor of theme throughout the show. Green and red are used a lot, with red symbolizing loss of control and green symbolizing lust. A bright flash of green or red light creates more of an impact than any spoken line could. When a character’s costume incorporated red or green, it was no mystery what that character is feeling on the inside. Blues and whites are also common, which represent superiority and innocence. There were also some connections between the original film and the new series, like the way Nurse Ratched wears her key ring on her left upper arm or the identical tiling on the walls of the psych ward.

One thing Murphy does well in many of his shows is gore, and Murphy used a lot of it in  “Ratched”. For fans of his other shows like “American Horror Story”, there’s considerably less gore in “Ratched”, but still plenty of blood and lobotomies to make you avert your eyes from the television screen.

“Ratched” already has a second season coming, and Murphy and Romansky plan to make four seasons overall, with the fourth segwaying right into Nurse Ratched’s storyline in Cuckoo’s Nest. After the way the first season ended, there are a lot of unknowns about the path the next set of episodes will take. The second season will undoubtedly be outlandish and creative, and I have hope that it takes more of a straight path and draws more connections to the Nurse Ratched from the original story.