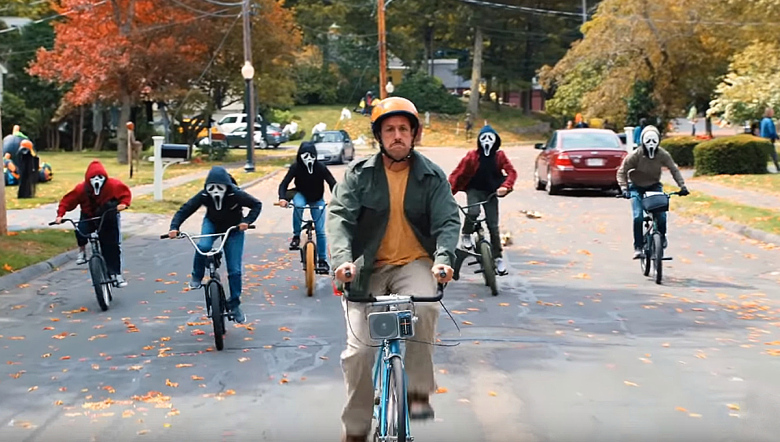 Adam Sandler stars in “Hubie Halloween”, his most recent film since “Uncut Gems”.

Adam Sandler film “Hubie Halloween” is a blast to the past

On Dec. 3, 2019, Adam Sandler claimed he would make a horrible movie on purpose if his movie “Uncut Gems” did not win any Oscars. Well, “Uncut Gems” was not even nominated for an Oscar, and so on Oct. 7,  2020, Sandler delivered what some are calling his new low, “Hubie Halloween”.

“Hubie Halloween” is not a typical Halloween movie as it expressed little fright in its storyline and some say that it was barely a treat with its recycled humor.

The movie takes place in Salem, Massachusetts, which is a popular Halloween hotspot due to its history of the Salem Witch trials. It focuses on a man named Hubie Dubois (Sandler) who is bullied by practically the entire town due to his obnoxious voice and personality. Every Halloween, Hubie takes it upon himself to monitor Halloween and keep everyone safe. This job usually only includes making sure kids only take one piece of candy when it says to take one, but this year includes an escapee from the mental institute, a new suspicious neighbor (Steve Buscemi) and a cop that will not listen to him. Also, Hubie’s lifetime crush, Violet Valentine (Julia Bowen), shares feelings for him, but Hubie does not get the hint.

The film received attention because it was Adam Sandler’s Hollywood reunion plan. He brought together some of his favorite actors and actresses from movies he has been in. The main roles included Adam Sandler, Julia Bowen, Noah Schnapp (Violet’s son), Steve Buscemi and Kevin James (Neighborhood cop). Some of the minor characters included some famous Disney stars like China Anne McClain, Peyton List and Paris Berelc. Karan Brar played Hubie’s main bully. The late Cameron Boyce was cast in the role initially. The movie was in memory of him.

In terms of audience reception, it scored 50% with critics. The failing score was a result of many mentioning the cheap and cliche jokes that have been used far too much over the years.

“Sandler surely knew this mildly offensive, juvenile celebration of cheap scares, slapstick gags and bodily function ‘jokes’ was sure to land near the bottom of the large pile of terrible movies starring [himself],” Richard Roeper of the Chicago Sun-Times said.

Other critics were purely annoyed by the voice Adam used to portray Hubie because at times it was hard to understand what he was even saying.

“Sandler has always been a repository of goofy voices, but what he thought was funny about the mannered muttering he does here is unclear,” Ben Kenigsberg from the New York Times said.

Among the critics that did not favor this film, a small group of people enjoyed it. Most of them knew they weren’t looking for an Oscar winner but rather a movie that had throwbacks to the cliche humor and storyline.

This isn’t the first time Adam Sandler has released what some call “cringe-worthy” movies. He also produced and acted in other movies like “Grown Ups” and “Paul Blart Mall Cop”. So overall, if you’re one of those people that prefer the movies with cliche and dumb jokes, like “Grown Ups”, then “Hubie Halloween” may be worth your time to get a few laughs. Otherwise, if you were thinking that “Hubie Halloween” was going to be a film with a bit of fright to it or a comedic spotlight, then it would be best to choose a different movie to spend your evening watching.