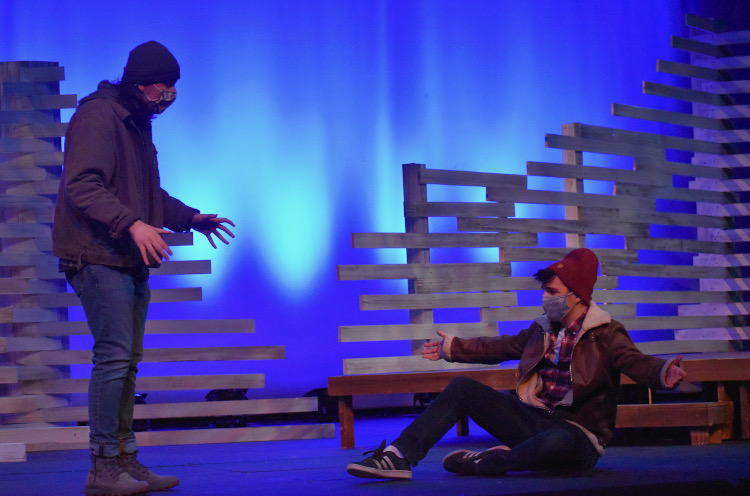 Sophomores Aidan Costanzo and Ben Plaisted perform their scene, “They Fell” as their characters find love in unexpected places. “I think the most important message from my scene is acceptance,” Plaisted said. “Both of the characters in the scene go on a mini journey of accepting a huge part of themselves, and all the pain and conflict comes from one not accepting the other or themself.” (Photo by Lucy Valeski)

Sophomores Aidan Costanzo and Ben Plaisted perform their scene, “They Fell” as their characters find love in unexpected places. “I think the most important message from my scene is acceptance,” Plaisted said. “Both of the characters in the scene go on a mini journey of accepting a huge part of themselves, and all the pain and conflict comes from one not accepting the other or themself.”

In times of uncertainty, York Drama aims to make one thing certain: love can lift us to new heights. The program’s first production of the 2020-2021 season highlights this theme more than ever as it explores the true meaning of connection in our current disconnected world. John Cariani’s “Almost, Maine” presents love with fantastical elements that stretch the imagination as well as the heart. The play contains nine stories, following the relationships of strangers, friends and lovers as they evolve on one magical winter night.

Director John Forsythe decided to set York’s production in present time, meaning actors will be masked and socially distant on stage. However, that will not stop the show’s characters from having heart-to-heart connections. Characters may be physically six feet apart, but their emotional bonds bring them closer than ever.

“This show is unlike any other production I’ve ever been a part of due to COVID-19,” junior Leo Macariola said. “Emotionally connecting with my scene partner was definitely more difficult, however overcoming that hurdle allowed for a connection on stage that I’ve never experienced before.”

In order to fit with the guidelines set by the school, student directors altered the show’s physical interactions. It was challenging to get a grasp on how this show would flow with the new rules in place; as time went on, actors and directors were able to work around any obstacles brought on by restrictions.

“There were moments where I really had a vision for a scene, but since there was no contact, it was an obstacle that I had to work around,” senior Caitlin Maguire said. “It caused me to take a new approach to the scene in general.”

For all involved, working on this production was uncharted territory. The pandemic has made all types of theater around the country more difficult to produce; yet, York Drama was able to safely unite together to create art that can be enjoyed by the whole community.

“Creating a show with masks and social distancing guidelines was a really cool experience,” senior Katie McCann said.  “It wasn’t something that I ever thought that I would have to do, but it has shown me that even in the most difficult times, we can still be creative and make something impactful that reflects our lives today.”

“Almost, Maine” is not just a York production, but also an outlet for students to express themselves in a way that they haven’t been able to do since March. Actors, directors and stage managers reunited on stage in order to bring this show to life.

“The most interesting part was seeing how everyone rose to the challenge,” junior and stage manager Kayla Willey said. “We followed the rules and stuck together to put on an amazing production. We didn’t quit and the love for the program kept it alive even during a time like this.”

The show will be pre recorded and live streamed on October 22, 23, 24, and 25 at 7:30 pm. Tickets are free, but donations to the program are greatly appreciated. Tickets can be purchased online at ychsdramaboxoffice.com.