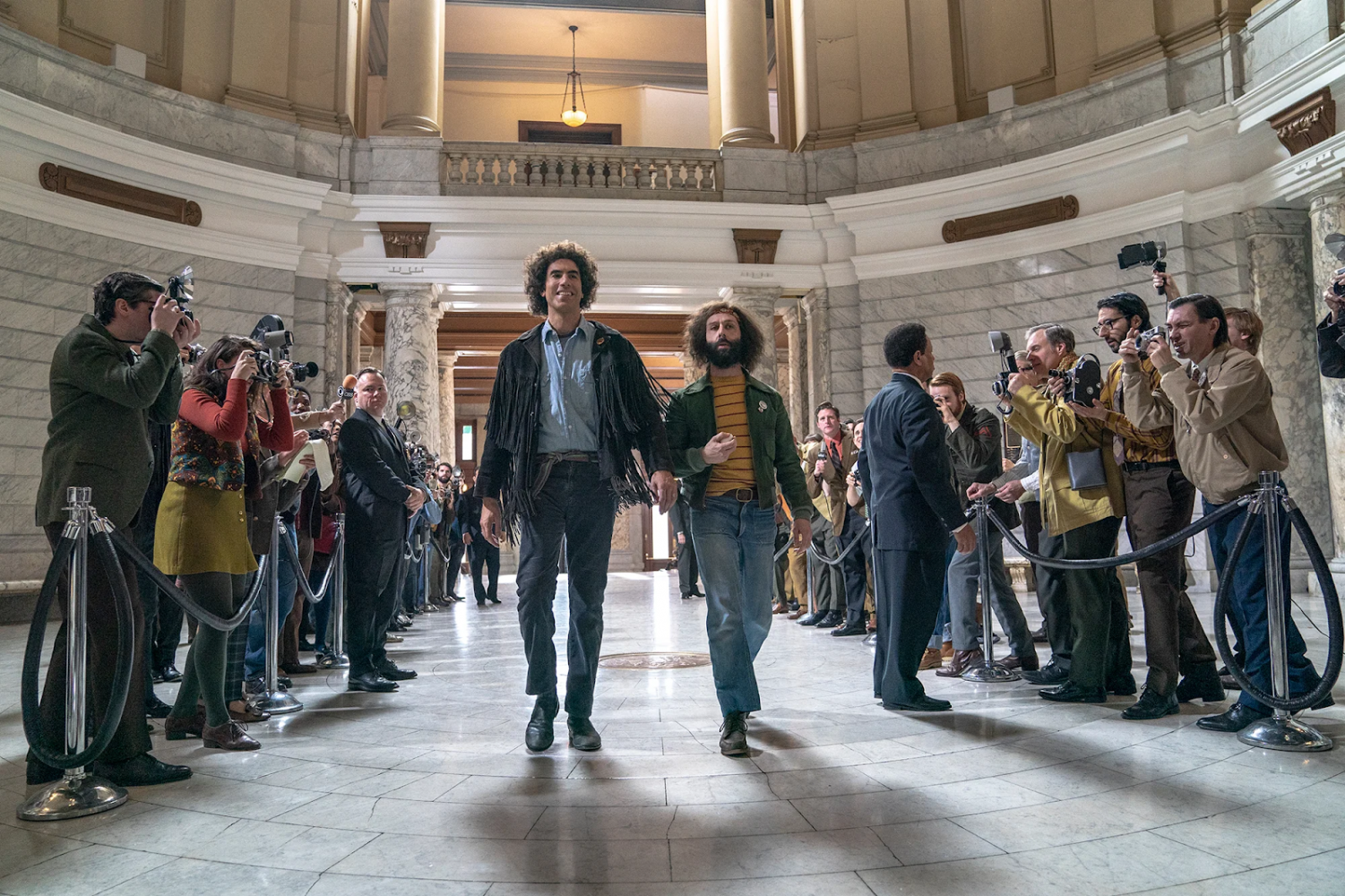 Reporters photograph “Yippies” Abbie Hoffman (Sacha Baron Cohen) and Jerry Rubin (Jeremy Strong) on their way into the first day of the trial. The two inflammatory protestors provide comic relief throughout “The Trial of the Chicago 7”. (Photo by Vanity Fair)

Reporters photograph “Yippies” Abbie Hoffman (Sacha Baron Cohen) and Jerry Rubin (Jeremy Strong) on their way into the first day of the trial. The two inflammatory protestors provide comic relief throughout “The Trial of the Chicago 7”.

As debates over police brutality tear through the nation, Aaron Sorkin delivered “The Trial of the Chicago 7” on Netflix last Friday, Oct. 16. The courtroom drama is based on the true story of eight protest leaders charged with inciting violence at the 1968 Vietnam War protest outside of the Democratic National Convention in Chicago. At the protest, the National Guard, the U.S. Army and Chicago police officers mobilized against the protesters in a bloody conflict. The trial essentially asks who takes the blame for the violent turmoil; however, Sorkin’s original screenplay questions who will go down in history as guilty: the protesters or the police officers.

“I really enjoyed the movie, especially because you could see the parallels between what is happening today and back then,” senior Meagan Maiers said. “It is interesting to see how problems that existed years ago still seem to happen today.”

The film takes a firm stance in the first few minutes while introducing the protesting protagonists. The impassioned Tom Hayden (Eddie Redmayne) is a member of the Students for a Democratic Society and is most likely the “hero” of the film. Two “Yippies”, Abbie Hoffman (Sacha Baron Cohen) and Jerry Rubin (Jeremy Strong), center themselves as the comic relief and sometimes moral compass throughout the trial. The conflict between Hoffman and Hayden is present throughout the film as they debate the right and wrong ways to protest, even though they share objectives. Bobby Seale (Yahya Abdul-Matten II) is the leader of the Black Panthers, and he is often ostracized from the other Chicago 8. “The Trial of the Chicago 7” quickly sides with the protesters.

Any courtroom drama has the potential for boring and confusing dialogue to the casual viewer. However, Sorkin crafted a quick and often hilarious screenplay to keep viewers engaged for the two hour and ten minute runtime. Much of the film takes place during the five month trial, however there are frequent heart stopping flashbacks to the protests. “The Trial of the Chicago 7” is always entertaining with exciting and empowering protest scenes and snappy trial dialogue.

Every performance in “The Trial of the Chicago 7” is excellent, with no cast member outshining another. Redmayne as Hayden remains firm and tightly-wound until his infuriated but effective protest speech. His arguments with Cohen as Abbie Hoffman were some of the most interesting scenes throughout the film. Cohen gives a humorous and impactful performance as the inverse of Redmayne. Abdul-Matten II also provided some emotional moments throughout the film. Michael Keaton made a brief yet exciting appearance as the defiant previous attorney general.

Judge Julius Hoffman (Frank Langella) and the prosecutors (Joseph Gordon Levitt and J.C. Mackenzie) served as the politically motivated adversaries of “The Trial of the Chicago 7”, however their presence always felt ingenuine and uninteresting. The stakes in the trial scenes never felt high enough because their presence was never threatening. Hoffman’s various grabs for order and power were floundering and misguided.

“The Trial of the Chicago 7” hit every emotional note, making the audience feel anger, sadness and triumph at all the right times. However, with a snappy screenplay and emotional score, the film’s emotions felt manufactured; Sorkin controlled the audience’s feelings in any given scene from the first courtroom scene to the final “the whole world is watching”. It also left very little room for interpretation because the film always sided with the protesters. I wanted “The Trial of Chicago 7” to feel as scrappy and divided as the current protests.

“This movie, ‘The Trial of the Chicago 7’, was never supposed to be about 1968,” Sorkin said in an interview with Vogue. “It was always meant to be about today. And so the conflict between Tom Hayden and Abbie Hoffman in this film is reflective of the intramural tension on the left between the left and the further left. The people who are saying, we need incremental change, we need to do this practically, we have to compromise, please, will you quiet down about defunding the police and the Green New Deal until after Nov. 3.”

As relevant as “The Trial of the Chicago 7” feels to 2020, it remains fairly uncontroversial. The film quickly skirts around any topics pertaining to race relations, and it fails to pass the Bechdel Test by a long shot.

However, it did raise an interesting question. In 50 years, will history side with protesters as the “good guys”? Will the police officers of 2020 be vilified in the race relations chapter of our history books? I would argue “The Trial of the Chicago 7” believes so.