THIS IS YORK • October 27, 2020 • https://thisisyork.org/29913/news/the-final-faceoff-presidential-candidates-debate-one-last-time-before-the-2020-election/

The Final Faceoff: Presidential candidates debate one last time before the 2020 election 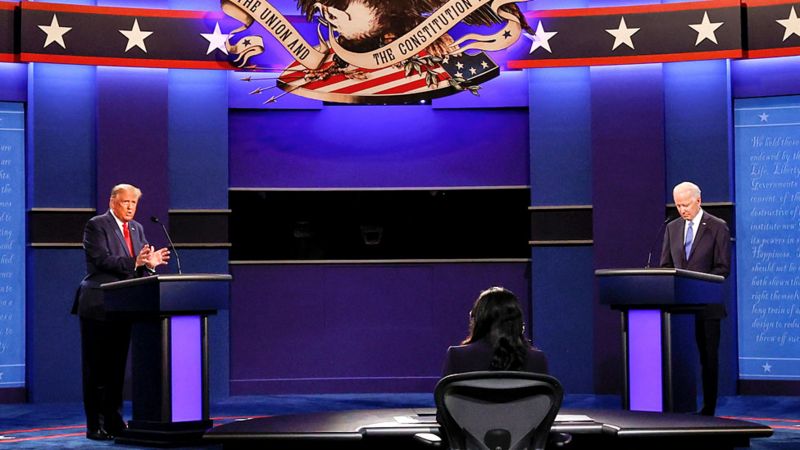 On Oct. 22, 2020 the nation watched as our presidential candidates, Donald Trump and Joe Biden, had their last debate of the 2020 election season. The debate was held at Belmont University in Nashville, Tennessee and was moderated by NBC’s news host Kristen Welker. To prevent interruptions, the debate commissioned to mute the opponent’s microphone during opening statements. Then, both microphones were on during open discussion.The 90 minute debate discussed topics of coronavirus, national security, health care, immigration, race in America and climate change.

Welker first proposed the question to Trump inquiring about what he plans to do regarding the next stages of the coronavirus crisis. Trump replied by comparing the nation’s great economic health to other countries and explained his immediate plans to carry out a vaccine by the end of the year.

“And there was some spikes and surges and other places, they will soon be gone,” Trump said. “We have a vaccine that’s coming. It’s ready. It’s going to be announced within weeks. And it’s going to be delivered. We have Operation Warp Speed, which is the military is going to distribute the vaccine.”

Biden responded to the same question by signifying the accountability citizens must give to the president, and he plans to set up rapid testing and national standards for opening up school and small businesses.

“What I would do is make sure we have everyone encouraged to wear a mask all the time,” Biden said. “I would make sure we move into the direction of rapid testing, investing in rapid testing. I would make sure that we set up national standards as to how to open up schools and open up businesses so they can be safe and give them the wherewithal, the financial resources to be able to do that.”

The next issue presented regarded national security, specifically addressing the illegal foreign influences in the election ballots. Welker mentioned how top intelligence officials confirmed that both Russia and Iran are working to influence this election. Welker first asked former vice president, Biden, what he would do to put an end to this threat. Biden explained that anyone who interferes with American elections will face serious repercussions and spoke about the president’s relationship with Vladimir Putin, Russia’s president.

“They will pay a price if I’m elected,” Biden said. “They’re interfering with American sovereignty. I don’t understand why this President is unwilling to take on Putin when he’s actually paying bounties to kill American soldiers in Afghanistan, when he’s engaged in activities that are trying to destabilize all of NATO. I don’t know why he doesn’t do it, but it’s worth asking the question. Why isn’t that being done? Any country that interferes with us will, in fact, pay a price, because they’re affecting our sovereignty.”

Trump responded to the same question by indicating that Biden and his family are receiving money from Russia and explained what he’s done in relation to Russian sanctions and NATO (the North Atlantic Treaty Organization).

“Joe got $3.5 million from Russia and it came through Putin, because he was very friendly with the former mayor of Moscow and it was the mayor of Moscow’s wife,” Trump said. “And you got $3.5 million…There has been nobody tougher to Russia between the sanctions… I’ve got the NATO countries to put up an extra $130 billion going to $420 billion a year. That’s to guard against Russia.”

Welker proceeded to the issue of healthcare and explained how the Affordable Care Act was heading to the Supreme Court. She addressed how the president and his administration are looking to overturn the ACA with the newly appointed Supreme Court Justice Amy Coney Barrett. Welker first directed her question to the president and asked what he would do if over twenty million Americans lose their health insurance.

“What I would like to do is a much better healthcare, much better,” Trump said. “We’ll always protect people with pre-existing [conditions]. So I’d like to terminate Obamacare, come up with a brand new, beautiful healthcare. We’ll always protect people with pre-existing [conditions]…Under what [Biden] wants to do, which will basically be socialized medicine, [Biden] won’t even have a choice, they want to terminate 180 million plans. We have done an incredible job at healthcare, and we’re going to do even better.”

Welker then turned to Biden about his plan to build on Obamacare and asked him what his plan would be if the law is ruled unconstitutional by the Supreme Court. Biden then explained his plan to pass Bidencare and opposed Trump’s claim of him wanting to eliminate private insurance.

“What I’m going to do is pass Obamacare with a public option, and become Bidencare,” Biden said. “The public option is an option that says that if you in fact do not have the wherewithal, if you qualify for Medicaid and you do not have the wherewithal in your state to get Medicaid, you automatically are enrolled, providing competition for insurance companies. Not one single person with private insurance would lose their insurance under my plan, nor did they under Obamacare..”

Welker introduced the topic of immigration and talked about the children who are separated from their parents at the border. Welker explained that the United States can’t locate the parents of more than 500 children. She asked the president how will these families ever be reunited. Trump disregarded the question and talked about how the cages the children were placed in were built by Biden during his vice presidential term.

“They built cages,” Trump said. “They used to say I built the cages, and then they had a picture in a certain newspaper, and it was the picture of these horrible cages…And then it was determined they were built in 2014. That was [Biden]. They built cages.”  When asked again about the reunion of the families Trump responded,  “We’re working on it very… We’re trying very hard. But a lot of these kids come out without the parents. They come over through cartels and through coyotes and through gangs.”

Biden responded to Trump by stating, “Let’s talk about what we’re talking about. What happened? Parents were ripped… Their kids were ripped from their arms and separated, and now they cannot find over 500 of the sets of those parents, and those kids are alone. Nowhere to go. Nowhere to go. It’s criminal.”

Welker then inquired about why people should trust Biden with his immigration policies when the Obama Administration failed to deliver immigration reform.

“Because we made a mistake,”Biden said. “It took too long to get it right. And the fact is I’ve made it very clear. Within a 100 days, I’m going to send to the United States Congress a pathway to citizenship for over 11 million undocumented people. And all of those so-called Dreamers, those DACA kids, they’re going to be immediately certified again to be able to stay in this country and put on a path to citizenship.”

Welker displayed the way Black and Brown Americans experience race in the country and illustrated “the talk” many parents have with their kids in order to prepare their children for the chance that they could be targeted, including by the police, for no reason other than the color of their skin. Welker asked the former vice president to speak directly to the families and inquired if he knew why these parents fear for their children.

“I do,” Biden said. “The fact of the matter is, there is institutional racism in America…We have to provide for economic opportunity, better education, better healthcare, better access to schooling, better access to opportunity to borrow money to start businesses, all the things we can do. And I’ve laid out a clear plan as to how to do those things just to give people a shot.”

Trump responded to the same question with, “Yes, I do. And again, he’s been in government 47 years, he never did a thing, except in 1994, when he did such harm to the black community, and they were called … and he called them superpredators…Nobody has done more for the black community than Donald Trump. And if you look, with the exception of Abraham Lincoln, possible exception, but the exception of Abraham Lincoln, nobody has done what I’ve done.”

The final topic discussed was climate change, and Welker addressed the contrasting views of both candidates regarding the job perspective of environmental regulations. Welker started with Trump and asked how he would combat climate change and support job growth at the same time.

“So, we have the trillion trees program, we have so many different programs, I do love the environment…We have the best lowest number in carbon emissions, which is a big standard that I noticed Obama goes with all the time…,” Trump said. “When they put us in [the Paris Accord], they did us a great disservice, they were going to take away our businesses. I will not sacrifice tens of millions of jobs, thousands and thousands of companies because of the Paris Accord, it was so unfair…It would have destroyed our businesses”

Biden responded to the same question by stressing the climate crisis we are in and laid out his plan in detail for environmental reforms.

“Climate change, global warming is an existential threat to humanity,” Biden said. “We have a moral obligation to deal with it. And we’re told by all the leading scientists in the world we don’t have much time, we’re going to pass the point of no return within the next 8 to 10 years. [Biden’s climate plan] will create millions of new good paying jobs.”

A majority of viewers believed Biden won the last presidential debate. A survey conducted by POLITICO found that 54% of debate watchers believed Biden won the debate while 39% said Trump did. As of Oct. 27, Biden leads in the national polls with 51.8 % while Trump has 42.3% according to the Guardian. American citizens will cast their votes for the presidential election on Tuesday, Nov. 3.