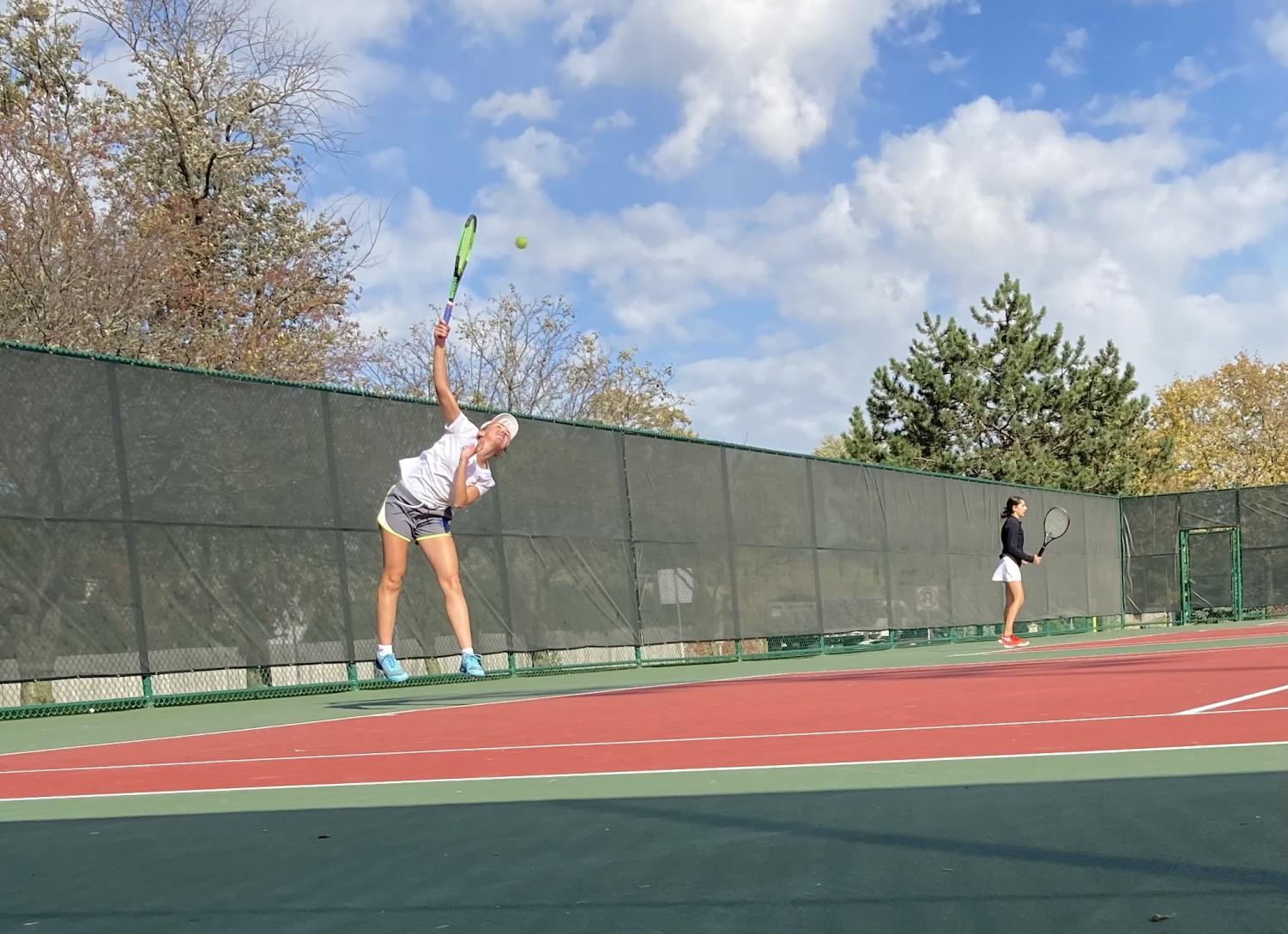 Top singles varsity player Gianna Nickoleit, places third at sectionals on Friday. “I knew that it was my last few matches of high school tennis, so I wanted to play the best I could. I even beat Hinsdale central!” Nikoleit said. (Phoebe Stergios)

Top singles varsity player Gianna Nickoleit, places third at sectionals on Friday. “I knew that it was my last few matches of high school tennis, so I wanted to play the best I could. I even beat Hinsdale central!” Nikoleit said.

The Girls Varsity Tennis Team finished their season last weekend at sectionals, where doubles played at Lyons Township and singles played at Hinsdale Central. The team was grateful to have a season this year although there were quite a few changes to the tennis program’s schedule and events.

“The IHSA approved the sectional competition on Oct. 15 and 16, but there is no state tournament scheduled this season,” varsity coach Tres Heinmann said.

Despite the restrictions of COVID-19, including the program’s short season, social distancing and closed courts, the tennis program was still able to have a season. The girls gave it their best effort up until the conclusion of the season.

“During conference and sectionals, I felt prepared and confident. I knew that it was my last few matches of high school tennis, and I wanted to play the best I could,” number one singles varsity player senior, Gianna Nikoleit said.

The parts of the sport that made it so fun, often had to be pushed to the side. In particular the social aspect of being on a team.

“I felt the team wasn’t able to get as close as we usually do,” Nikoleit said. “There weren’t any pasta parties, Saturday meets, singing to music on the bus rides and gathering up to cheer a teammate on. Normally at events like those, it really would bring the team together as a family.”

The disrupted season affected each player in a specific way. For seniors, it was disappointing to have their season end abruptly, but, on the other hand, freshmen came into the season not knowing any different.

“This was my first experience with the team and everyone was super welcoming and nice, but I do wish we could’ve had a normal season,” number two singles Varsity player freshman, Amelia Karr said. “I feel like our team could’ve bonded a little more, and I wish I could’ve gotten to know more people on the team.”

The girls played a full season in spite of the setbacks. The team took third place in the WSC, the conference tournament. Following those matches, they competed in sectionals.

“I came in third place for both conference and sectionals, and I even beat [a competing high school] Hinsdale Central!” Nikoleit said.