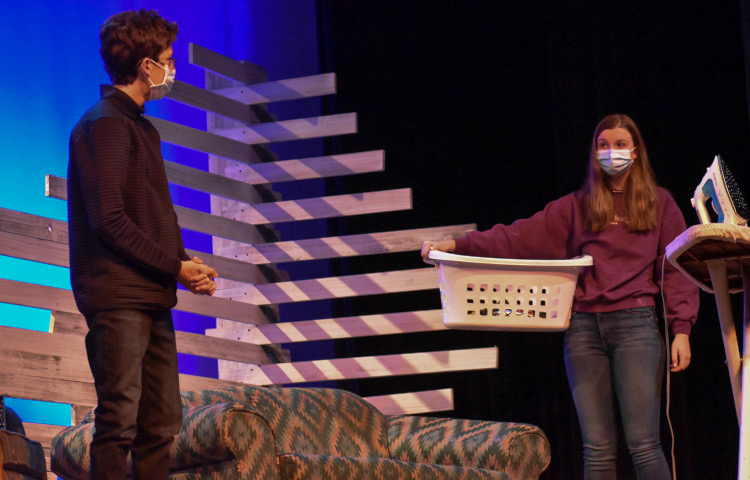 Senior CeCe Lampa and sophomore Oliver Roy play Steve and Marvalyn as their characters grapple with the pains of love. Their scene “This Hurts” is one of nine stories in “Almost, Maine”. (Photo by Lucy Valeski)

Senior CeCe Lampa and sophomore Oliver Roy play Steve and Marvalyn as their characters grapple with the pains of love. Their scene “This Hurts” is one of nine stories in “Almost, Maine”.

York Drama performed their fall production of “Almost, Maine” this past weekend in a virtual format. The play, which the cast prerecorded on the Tuesday before, debuted to the public via Zoom on Thursday through Sunday evening.

“Almost, Maine” is a series of nine short plays by John Cariani about missed and broken connections between friends, spouses, partners and ex-partners. It explores love and loss in a small, fictional town in Maine. The play first debuted in Portland, Maine in 2004.

“‘Almost, Maine’ has been on a list of shows I want to do for at least 10 years,” director John Forsythe said. “I wanted to do it as part of a festival…We just do not do enough love stories, I think. It is always a lot of heavy stuff, I think, so I thought it would be really fun to do this…When the whole COVID-19 thing came around, I knew this was clearly the piece for this time. It is a festival about love. It really fits what we are doing.”

A virtual distribution format was not the only safety precaution taken by the cast, directors and production team. Cast members wore masks throughout “Almost, Maine”, and the blocking allowed performers to remain at least six feet apart.

“I think setting the show in the present time, where we have to wear masks and stay six feet apart, really changed and shifted the meaning of the show to be even more impactful because it shows the love stories that happen in the show can happen at any time or anywhere,” senior and cast member, Tessa Olson said. “It made it a lot more realistic.”

With the extra safety precautions, Forsythe chose to set the play in our current coronavirus ridden times. The themes of communication difficulties and a lack of human connection explored during the show carry over to 2020’s social distancing and mask guidelines. Many of the short plays were about feelings of isolation; students may be feeling or have felt isolated during the current pandemic.

“There were certainly several scenes that I looked at differently after putting them in the context of the pandemic, as some of the scenes talk about the importance of closeness, and some scenes talk about isolation which are very relevant to the emotions many people are feeling during this pandemic,” senior cast member and student director, Heidi Ward said. “Overall, all of the scenes address connections and relationships between two people, and the importance of love.”

While masks are often seen as a barrier for communication, the actors in “Almost, Maine” found it as another objective in their scene to overcome. The mandated masks were able to enhance and improve the performances.

“The pandemic really highlights the obstacles that those characters face,” Forsythe said. “It allows those moments to be to hold a mirror to our lives, not just with what we run into being isolated, but the greater scope of our lives: the isolation that we all deal with and the connections we all look for. Even with the isolation, with the scene “Where It Went”, there is an isolation within a relationship. They talk about being alone, even though they are still together.”

“Almost, Maine” is the first show in York Drama’s 2020-2021 season themed “Lift With Love”. The program aims to expand last year’s Season of Empathy by spreading love into the community with cards. Earlier this month, Drama Club students gathered outside of York to discuss the themes of love and empathy in the fall play. A week later, students involved in the play teamed up with other Drama Club students to decorate the school with “Almost, Maine” and “Lift With Love” messages.

“‘Almost, Maine’ has been very different for me compared to other shows, this is the first show where I’ve been able to direct and act, which was an awesome opportunity especially since it felt like all my extracurriculares have been taken away,” Ward said. “Though I am grateful for the presence of a fall show, I do miss the sense of community and collaboration that we usually get when putting together shows like this.”