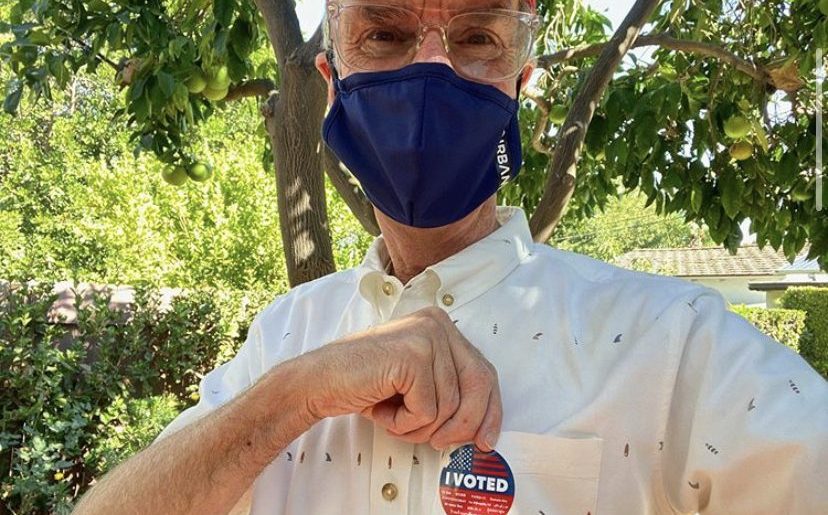 Bill Nye poses in a mask with his “I voted” sticker in an Instagram post. Nye, who has been active in the climate change awareness movement captioned his photo, “It’s a beautiful day to get out and vote. #voteforscience.” (Photo courtesy of Bill Nye’s Instagram )

Bill Nye poses in a mask with his “I voted” sticker in an Instagram post. Nye, who has been active in the climate change awareness movement captioned his photo, “It’s a beautiful day to get out and vote. #voteforscience.”

The upcoming presidential election on Nov. 3 has our country in a state of disarray. Many American citizens want to see change made, yet the only way to do so is by voting. While only 56% of the United States’ eligible voters cast a ballot in the 2016 election, there has been quite the initiative to increase voter turnout for this election. Celebrities have taken to their social media platforms to encourage voting and remind citizens of their individual power to make change.

The target audience of these celebrities’ posts and videos seem to be young and first time voters, some of whom attend York Community High School and are passionate about the future of our country.

“I turned 18 on October 3, 2020,” senior Maylynn Strauss said. “I was very excited to vote because I am passionate about politics and in my opinion, this is a very important election! In the last election so many young people did not vote, I want that number to change in this election.”

While it can be frustrating for some as they have to sit on the side-lines, numerous students at York who cannot vote yet continue to be just as active and aware of the current process of our government.

“I would be voting in this election if I could,” junior Mary Braden said. “This election is extremely important. Issues like healthcare, LGBTQ rights, women’s rights, etc. are very important to me and are on the line this election. I would be excited to vote if I could because I want my voice to be heard and to help protect issues that mean a lot to me.”

Celebrities including Leonardo DiCaprio, Billie Eilish, Timothée Chalamet, Gigi Hadid, Selena Gomez, Ariana Grande, Joe Jonas, Taylor Swift and so many more have openly endorsed a candidate and encouraged voting on their various social media platforms. From tweets to Instagram posts and live streams, these stars have provided their followers with all kinds of information on how and when to vote.

“I follow celebrities like Ariana Grande who posts a lot on social media to encourage voting,” Braden said. “She is extremely vocal in getting out to vote and a good person to look to for information.”

So how do these encouragements affect new and soon-to-be eligible voters? The answer lies in the students here at York High School.

“I think it really helps to get young people to think about voting,” Strauss said. “People who can’t even vote yet will post on their stories about politics and spread news and ideas to others. They may not be able to vote but they still have influence on those who can. I think because of celebrities highlighting the importance of voting, more people are able to question and research politics, forming their own ideas instead of following their parent’s beliefs.”

Even younger students are able to see and feel this impact, preparing them for future elections where they can finally add their vote and feel a lasting impact.

“These posts have shown me how important it is to know all the information needed to vote in your area,” Braden said. “I think they have shown young voters that their voice is needed during elections and they have the power to change the country for the better.”

This power to initiate change and create a better world for our future is emphasized in a caption on an Instagram post made by Gigi Hadid last week. The model describes the type of America she wants for her newborn daughter and the pride she holds for American citizens who plan on voting.

If one thing is for sure, it is that these celebrities’ initiatives and efforts to encourage voting have paid off. Election experts have predicted an eligible voter turnout rate of more than 62%, an incredible increase from the 2016 election. While not all the credit can be given to these celebrities for raising those numbers, they definitely made an impact, especially on young voters.

“I voted because it is a privilege to vote,” Strauss said. “People fought for the right to vote and so I’m going to use that advantage.”