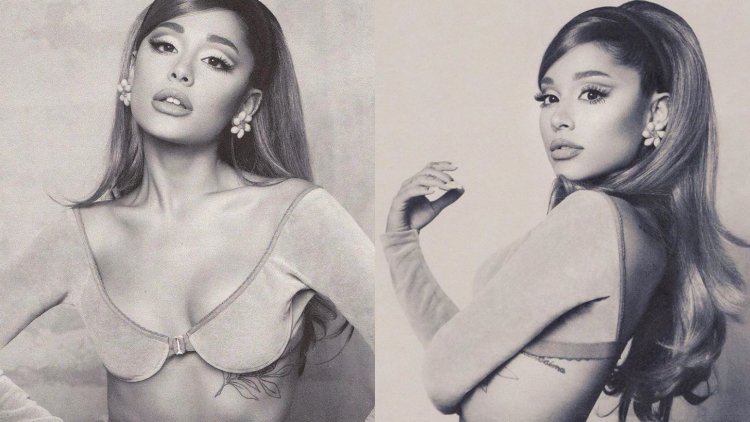 Singer Ariana Grande poses during a photoshoot for the cover of her sixth studio album, “Positions” (photo courtesy of Republic Records).

Singer Ariana Grande poses during a photoshoot for the cover of her sixth studio album, “Positions” (photo courtesy of Republic Records).

“Positions” packs a lyrical punch with familiar pop, as Grande gets personal like never before

Ariana Grande has never been afraid of getting personal. It’s kind of her signature move; she has this innate ability to make the deeply personal incredibly universal. Despite being constantly in the public eye, she is never afraid to speak her mind and tell others what she thinks. On Oct. 30, just two weeks after teasing fans on social media, Grande released “Positions”, her sixth studio album, and it’s her most intimate one yet.

Grande’s music is incredibly unique to her, which is a big part of why she’s so popular. Fans find comfort in her cottony voice, tight and airy harmonies and bubbly, crisp instrumental effects. On “Positions”, Grande definitely provided more than enough of her typical pop sound while also incorporating elements of funk and R&B. This made for a smoother, calmer listening experience, which paired perfectly with her tamely optimistic lyrics.

“I really liked this album because, musically, it really differs from past albums,” senior Lily Crow said. “Usually, Ariana’s musical base is mostly pop, but you can tell a lot of the songs are R&B or 90s influenced, which I thought she did a very good job executing. She also centered a lot of her songs off of an orchestra, and that really made her album stand out to me.”

The album starts with “shut up”, a fluffy song in which Grande, in the classiest way possible, tells people to mind their own business and stop telling her how to live her life. This track marks the first instance of strings being prominently featured, which many tracks that follow also shine a spotlight on. The album also features tracks with Doja Cat, The Weeknd, and Ty Dolla $ign. Each guest artist sings with Grande on a song that perfectly matches their own musical styles; Doja Cat’s is psychedelic and sharp, The Weeknd’s is spacious and smooth, and Ty Dolla $ign’s makes you want to get up and dance.

“‘shut up’ starts with an orchestral opener, which is smooth and sweeping, but then the lyrics are contrasting, as she sings about how the internet trolls should ‘shut up’ because she is going to do what she wants, and if people don’t like it then they can not listen,” Crow said. “A lot of the songs on the album are centered around strings, and it brings a very Disney princess vibe, but the lyrics can be the complete opposite of that, as she explains her personal experiences and emotions.”

If you’re looking for something fresh yet familiar from Grande, you’ll definitely be able to find that somewhere on this album. Tracks like “six thirty” and “just like that” offer self-confident lyrics paired with a psychedelic sound, while “nasty” combines a calmer EDM style with a more openly blunt message. “love language” is an excellent track for fans of 90s music, and “my hair” features some of the highest and most consistent whistle tones I’ve ever heard. There’s something for everyone on this album, and with its cool and confident vibe, you’ll find at least one song to listen to on repeat.

Grande is all about a lyrical narrative, which allows for her to show growth throughout each album, almost as if she takes her listeners through an autobiographical story. “Positions” honors how Grande has found happiness in her new relationship; whether it be in the simple things or in something explicit, she sings of the silver linings she sees all around her. Its optimism and intimacy translates to the reader and creates a lyrical environment of comfort and security.

“I’ve only listened to a few songs so far, but I thought the songs mixed the styles of her two most recent albums, ‘thank u, next’ and ‘Sweetener’,” senior Jillian Caforio said.

I found myself liking the album’s beginning and its end, but in the middle I got bored. Though Grande’s experimentation with a new music style proved fruitful on some tracks, it felt like she shied away from going all in. The album was safe and predictable, which is good at times, but at this point in Grande’s career, fans expect her to be bolder. The album was strong, but it had no shine. That’s how I tend to feel about a lot of Grande’s music; if I like it, I can’t stop listening to it, but if I don’t, I’ll never listen to it again. There’s no in between.

That being said, I instantly fell in love with “pov”. As the final track on the album, “pov” brings the listener back with soft vocals and a calming backing track, yet what really shines are the lyrics. She sings, “For all of my pretty, and all of my ugly, too, I’d love to see me from your point of view”, which is a perfect way for Grande to leave us as she goes. She’s finally come to love herself and the position she’s in; she’s ready to accept every flaw and mistake she’s made. She knows that, if someone else can love her, then she must be worthy of loving herself, and that makes it the purest, most optimistic way to leave fans.

“The album is sophisticated, yet also pushes the boundaries,” senior Giana Gatti said. “Because of the tonality in her voice, it seems a lot more innocent than the album is. Overall, the new album is full of bangers you can scream to while driving down Route 83.”

In its entirety, “Positions” is a perfect culmination of the journey Grande’s taken as a person and musician. Fans of her past albums will feel right at home within the crispy pop sounds she’s so known for, but they can take interest in her attempt to explore different genres and sounds. This album is a perfect example of an artist being able to accentuate the most personal moments in their life and make them universally felt by all. In the future, I hope Grande is bolder in exploring different musical styles, but she’s left us with plenty of pleasurable pop sounds to satisfy us while we wait.

“This project is my favorite for many reasons and I really can’t wait for it to be yours”, Grande tweeted on October 24. “Thank you for your love and excitement, it means the world to me.”

“Positions” is available for streaming on all music platforms now.