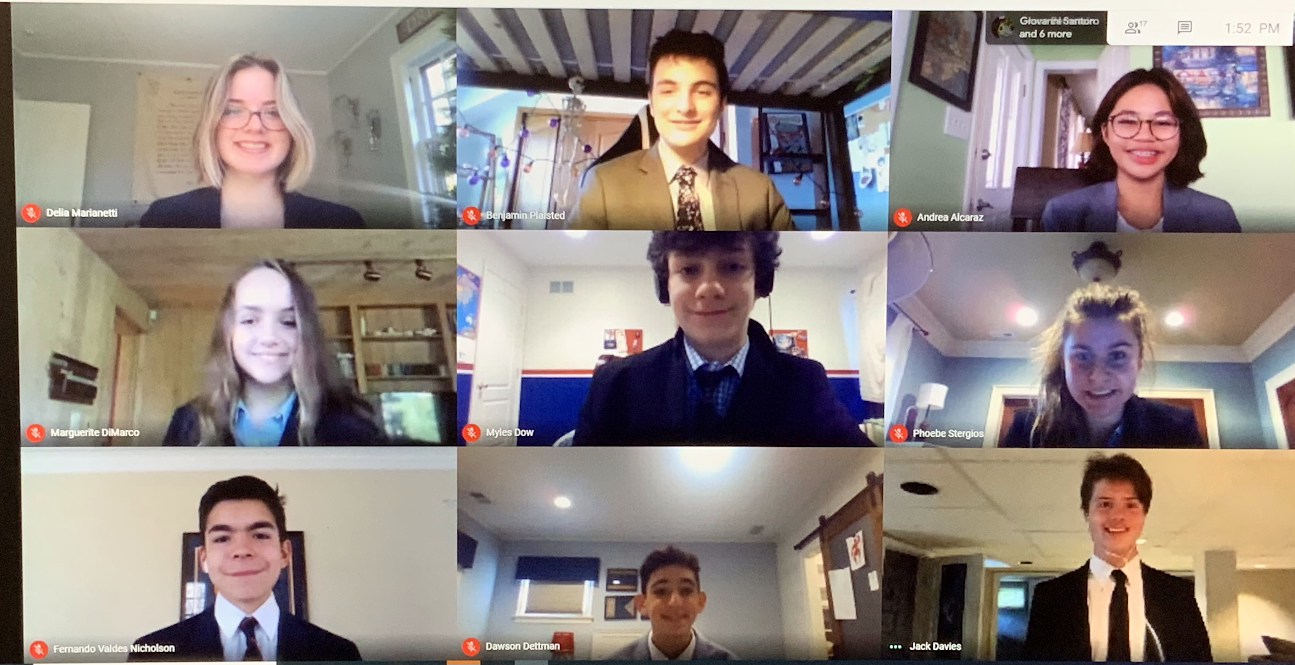 On Saturday, Oct. 31, the average teen may have watched horror movies with friends or dressed up in a Halloween costume, but for the novice members of the York Speech Team, they anxiously awaited the announcement of their final ranks after competing in their first virtual speech tournament.

The York speech team has been preparing their new members for the first tournament since the beginning of September. After numerous weekly coaching sessions and team building workshops, the novice team competed in their first virtual tournament at Homewood Flossmoor High School.

“I’m nervous about it, but I am also excited,” freshman and novice member, Emma Morey said. “This will be my first opportunity to perform for the judges.The more I practice, the more I will improve.”

“Performing is great; I love it,” senior and Co Captain, Emma Taylor said. “But I love all the friendships. Not only within our team, but all the new friendships that I would make walking around the halls of a school that you have no idea where you’re going and you can make a new life-long friend just by asking for directions or after a round going up to someone and complimenting their performance.”

The guidelines and rules to publishing video are strict to ensure equity for all competitors. Guidelines include no editing of the video and not having a busy background. Duet events, such as Humorous Duet Acting and Dramatic Duet Acting, must have partners on a split-screen recording. Having students record their performances can raise many challenges.

“The biggest challenge that I feel I experienced preparing for this tournament was finding a suitable location to film myself,” freshman and novice member,  Declan Fahey said. “I am blessed to have two siblings and both of my grandparents visit frequently. But because of this, my house is pretty cluttered. So it’s been a challenge to find somewhere where I can be alone to film with good acoustics and no clutter.”

Over the weekend, the novice team competed in the Homewood Flossmoor Halloween Classic tournament. The novice team had 29 award winners, including nine Tournament Champions. As a result, York placed first in the Team Sweepstakes award.

“I was honestly shocked more than anything,” senior Caitlin Maguire said, who received first place in Dramatic Interpretation. “I didn’t really know what to expect having this be my first speech tournament ever. I worked really hard to make sure my piece was as strong as possible and clearly all that hard work paid off. I’m excited to get my critiques back and see what I can improve on for the next competition.”

The season has only begun for the York speech team and head coach, Kevin Martin, expresses excitement for the new season and offers advice that pertains to team members.

“I’m excited for the season to begin because it gives kids something to look forward to in spite of everything that is going on in our world today,” Martin said.  “Kids will have that outlet to express themselves. Excellence is the goal, winning is the bonus. You should not perform to win but perform to improve and share your gift of communicating with others.”