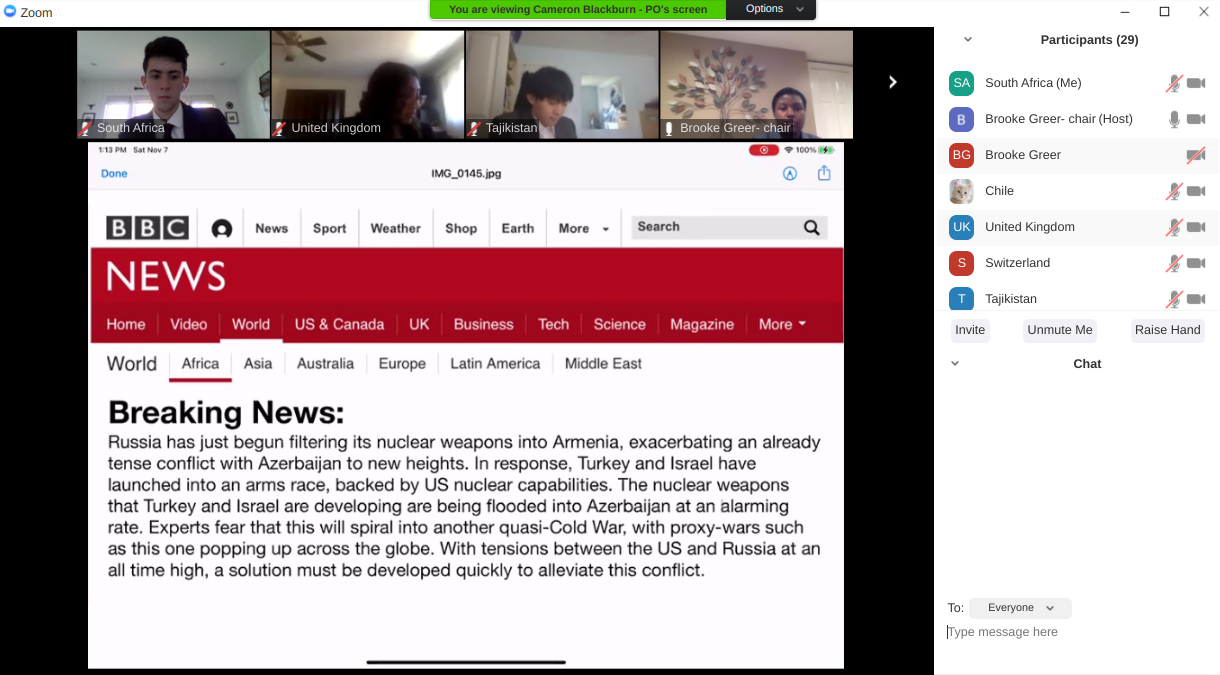 The Model UN delegates attend a conference held by St. Ignatius this past Saturday. They listened in as the chair described the proposed scenario over Zoom. Pictured at the top left is York’s very own Jonah Sweley, a junior executive committee officer of York’s Model UN club, representing South Africa. (Courtesy of Jonah Sweley)

The Model UN delegates attend a conference held by St. Ignatius this past Saturday. They listened in as the chair described the proposed scenario over Zoom. Pictured at the top left is York’s very own Jonah Sweley, a junior executive committee officer of York’s Model UN club, representing South Africa.

While most clubs at York have been somewhat hindered due to the change to a remote setting these past couple months, Model United Nations has been running quite smoothly. Despite the physical separation and a myriad of internet problems, York’s own Model UN was able to pull off two “honorable delegate” awards at a conference hosted by St. Ignatius over Zoom on Saturday. Overall, Model UN members have made a large team effort to keep the club running, showing the club’s resilience in face of the recent pandemic.

Before the conference on Saturday, the officers of Model UN held what is known as a “mini MUN” this past Wednesday, in which newer delegates learn the ins and outs of what a conference looks like while others get to hone in on their conference skills. Jonah Sweley, junior executive committee officer of York’s Model UN, helped his fellow officers organize and run the mini MUN similar to what a real conference looks like.

“We kinda just tried to simulate what a real conference is like,” Sweley said. “Everyone got in, we followed procedures, [we practiced] motions and voting. We had moderated caucuses and a couple of unmoderated caucuses, and in my committee, I actually had my delegates draft a partially completed resolution paper just so everyone could get an idea of how it works.”

“Usually, the way you learn how to do Model UN is at the conference, because it’s all about listening to other people,” Laney Toffler, sophomore executive committee officer, said. “There are usually upperclassmen delegates in your committees, so you just learn from them and go from there. So I feel like this year is kind of nice for underclassmen, just because they’re getting that practice before the conference.”

When it comes to the actual conferences, Zoom works surprisingly well. Model UN conferences are normally split into moderated and unmoderated caucuses. Moderated caucuses tend to be a more organized, presenter style discussion, which fits what Zoom was created to do.

“So [in moderated caucuses], one person speaks at a time, everyone’s silent, everyone listens and you have a speaking limit,” Sweley said. So, for Zoom that works really well because everyone can just turn off their microphones and someone can just talk for thirty seconds.”

Unmoderated caucuses tend to be harder to run over Zoom. In a normal setting, students would roam around to different delegates freely to discuss solutions and draft resolution papers. That’s not possible over a virtual setting, but Model UN members have found multiple ways to get around this barrier.

“We basically had a leader of each of the blocks […] either create a Google Meet or a FaceTime call and then just try to collaborate like that,” Toffler said.

Adam Gearing, the club advisor for York’s Model UN, is proud of his members and how they’ve acclimated to working over a remote setting. He emphasizes the future of Model UN and how the club will be able to bounce back once we return to a relatively normal setting.

“What we all have to do in these difficult times is to innovate and adapt, and we’ve done that,” Gearing said. “Officers are doing this, the new delegates are learning how to do this, so that glorious day when we return to doing things the way we remember them [before COVID-19], they’re not going to miss a beat. They’re going to be going to conferences and ready to go, and we’ll just keep on moving forward.”

Gearing also emphasizes that the point of Model UN is not just to win, but to also have fun in the process.

“How I measure success in ModelUN is people participating, people learning, and people having fun,” Gearing said. “I’m just as proud of a freshman who is going for the first time and comes away saying ‘That was awesome, I learned a lot and had a blast today’. That’s just as great as somebody winning best delegate.”

Despite working over a remote setting, Model UN delegates are just as able to have fun as they were in a pre-pandemic setting. Win or lose, it seems as though York’s Model UN club will always preserve that component, no matter the circumstances.

“I think that that’s one of the coolest parts of Model UN, is that no matter if you win an award or don’t, it is just so much fun,” Toffler said. “Even in the virtual setting, I was having an absolute blast last time […] The thing I’m mainly looking forward to for the rest of the team is just a great experience and for everyone to have a good time.”