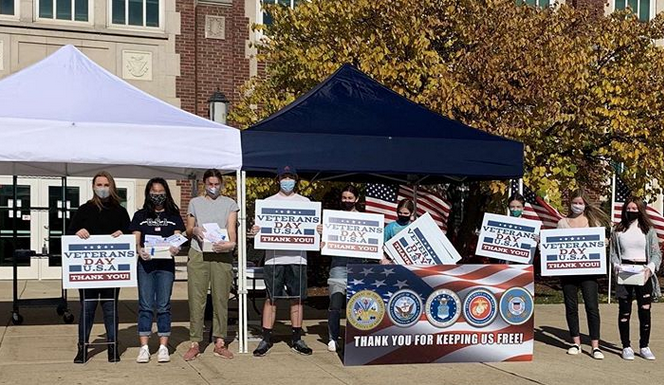 Members of Student Council stand in front of York with signs thanking Veterans for protecting our country. While a traditional Veterans Day assembly could not occur during the 2020-21 school year, Student Council still worked to honor the veterans in the community. (Photo courtesy of York StuCo)

Members of Student Council stand in front of York with signs thanking Veterans for protecting our country. While a traditional Veterans Day assembly could not occur during the 2020-21 school year, Student Council still worked to honor the veterans in the community.

In honor of Veterans Day, Student Council ran a drive-through brunch pickup at York for veterans and their families.

In normal years, Student Council hosts an annual breakfast for our veterans. Those who served, and their families, could come into York and eat a breakfast provided by the school. Due to concerns surrounding COVID-19, Student Council could not hold the breakfast they normally would on November 8. Instead, veterans and their families drove up to York to receive prepackaged meals, as well as other items prepared by various clubs.

“We promoted a Veterans Day drive-through lunch pickup at York,” student council member on the veterans committee, Mary Connor said. “Local veterans and their families were invited to pick up a lunch, and letters written by Key Club and Military History club, along with a yard sign that the veterans could display in their yards or homes.”

The breakfast could not be held in a traditional sense, not only due to social distancing guidelines but also the old age of many of the veterans attending. Student Council had to think about alternative ways of hosting the event. The veterans committee was charged with organizing the event and making any needed changes.

“The Veterans Day drive through event was really exciting to plan,” student council member on the Veterans Day committee Madeline Fine, said. “Our brainstorming process was very collaborative, with each committee member contributing to a different aspect of the event to make it more enjoyable and special for the Veterans.”

Eventually, the committee settled on a drive-in brunch. People attending would still receive food, just from the safety of their cars. All of this took place in the circle drive in front of the York building.

“We chose a drive-by style as it ensured that the celebration was safe, but still showed how much York Students and our community really care and celebrate Veterans,” Fine said. “It was an extremely safe meaningful and appreciation spreading event that helped veterans receive the recognition and celebration they deserve.”

Despite not being a traditional breakfast as in previous years, many of those who served and their families still pulled up to receive their meals. When the veterans arrived, student volunteers were there to greet the cars with signs thanking them for their service.

“Turnout was actually more than we expected,” the veterans committee chair said. “In total, we ended up serving about 70 meals to veterans and their families which was amazing.”

A large number of veterans were able to eat for free alongside their families thanks to the brunch, which was possible because of contributions from Student Council, Key Club, and Military History club. This annual event aims to show respect to those who have served protecting our nation.

“This event means a whole lot to me,” the veterans committee chair said. “Even with the pandemic and everything going on, we had so much help and support from Student Council, the York staff, and so many others that were were able to pull off a fantastic event and do something really special for our veterans.”