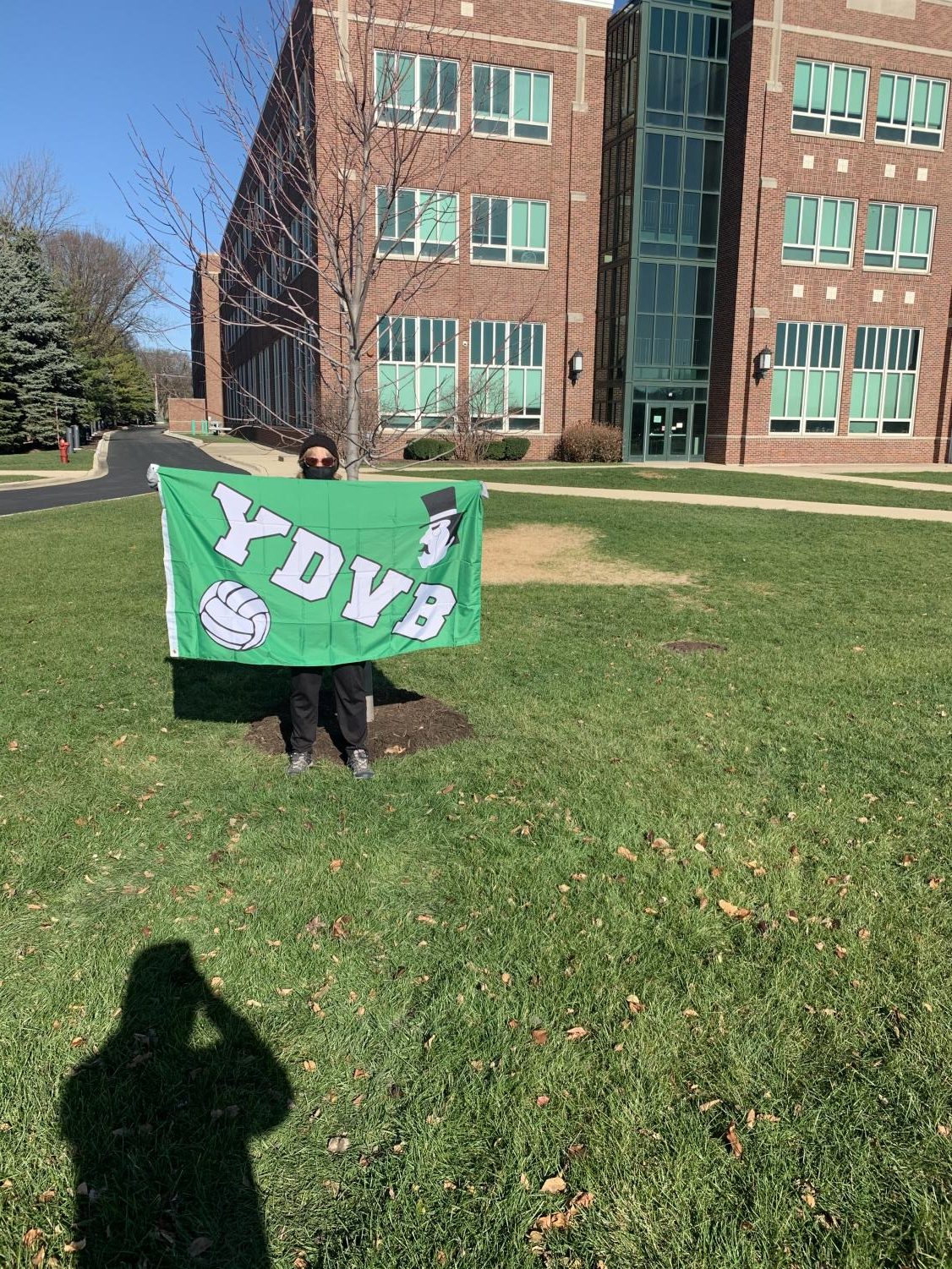 The York Girls Volleyball team has proven itself a force to be reckoned with on the court, where they’ve defeated tough competitors each year and have earned the reputation of one of the toughest teams in their conference. They work just as hard off the court, too, by devoting themselves to raising awareness for climate change and environmental stability, a passion that was first ignited by Head Coach Patty Iverson. With the money raised from selling food and beverages at games during last year’s season, the team donated $1,000 to plant 1000 trees through TeamTrees, a foundation dedicated to planting millions of trees worldwide in order to revitalize our damaged natural environment. In addition, the team raised extra to plant a marmo maple tree just outside of York near the LaBrigade windows.

“While we were able to donate $1000 for 1000 trees to be planted through TeamTrees, we can’t physically see them as they are planted where needed all over the world,” Iverson said. “So, the tree planted at York will soon be accompanied by a plaque that will let all visitors know that York Girls Volleyball helped to fight climate change both around the world and at home.”

A longtime champion of climate change awareness, Iverson suggested the idea to raise enough money to donate to TeamTrees over one year ago. TeamTrees has already planted over 22 million trees worldwide, and Iverson takes pride in the fact that her students have contributed to such a cause. Iverson also created a website, YorkGoGreen.com, which serves to update the community on ways in which Elmhurst can lead a more eco-friendly lifestyle and lists the previous progressive impacts of various clubs. The team has also been heavily involved with other eco-conscious clubs at the school, like Eco Club.

“We talk about actions to fight climate change and news of the environment in our Zoom meetings, and some of our girls have done Prairie Path cleanups and also helped [Bob Blaus] with pumpkin recycling, and all of the girls are actively trying to adopt more environmentally kind practices at home,” Iverson said. “But, it is very difficult for us to do something as a team as we are not able to physically come together. This month [until Winter Break], the Girls Volleyball Program is having a competition to see who can perform the most Green Acts. They’ll give a description and a picture of each act and I’ll tally them at the end of the month.”

Despite the team not being able to meet in person for the planting, the girls were still excited to watch the planting from through Zoom from their homes. The team takes pride in the fact that their hard work can now be celebrated by the community.

“I am so pleased that my team was able to make a change not only in the community, but for the Earth,” senior Olivia Shorter said. “The climate crisis is real and YDVB is ready to fight it. Although we were not able to be there in person due to COVID, we saw the tree on Zoom. It was a moment that I will never forget.”

It’s apparent that Iverson’s efforts to educate others on the environment have already affected the lives of her players. Many of the players now feel more knowledgeable about the ways in which everyday people are continually causing damage to the environment, and they have begun to alter their own lives in an effort to become more eco-friendly and aware.

“I’m proud of our team because Mrs. Iverson has definitely educated me about the importance of protecting the environment and the ways to keep it protected,” senior Katie Norgle said. “I’m proud of us for all working together to educate ourselves and others at York and in our community. Once you become educated, you want to become much more involved, and I’m proud of my team for becoming inspired advocates for change, something that is so important right now.”

Though COVID has disrupted the team’s ability to practice together and prepare for the start of their season in February, Iverson and her players remain determined to continue to educate the community about climate change. The team has continued to plan activities and take part in challenges that will make York a more eco-friendly place.

“We will certainly do something for the environment throughout the upcoming season, but what we do will depend on restrictions,” Iverson said. “We probably won’t be able to have a concession stand, but we can certainly continue to make PSA’s like we did last year. We can also continue to meet with environmentalists through Zoom to help us understand more about the environment and ways to stop climate change.”

When asked how she feels about making an impact in the lives of those around her, Iverson feels it’s like a ripple effect; with each person she educates, they can educate someone else and so on. If enough people within the community can become aware of the harm being done to the environment, she believes realistic change can be made on a global scale.

“I hope that by providing examples of what I have done to alter my lifestyle for the good of the planet, I can inspire our student-athletes to do so and that can spread to their families and the community,” Iverson said. “There is not much time for us to make these great changes in order to reduce our emissions and save the future of our planet for your generation and the next, so any successes in spreading the word and inspiring more environmentally friendly actions will lead to even more people taking up this noble cause.”