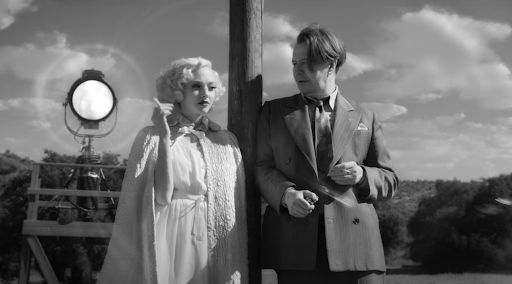 While it hardly appears fair to compare one of the most analyzed movies of all time with David Fincher’s comeback feature “Mank”, it also remains impossible to review the new Netflix movie outside of “Citizen Kane”. I watched both movies back to back, beginning with the Orson Welles classic. “Citizen Kane” is a technical triumph; it exacts amazement in the very first scene with the fantastical horror of Xanadu. The unconventional storyline leaves the modern viewer an emotional understanding of its characters. The titular character, Charles Foster Kane, remains an enimaga to the audience through the final maudlin conclusion, yet we understand his plight. Kane becomes a national marvel, but he will never fulfill his desire to be loved with self serving acts of goodness. “Citizen Kane” feels timeless, rooted in universal ideals and lacking a clear modern political agenda despite its basis on yellow journalist William Randolph Hearst.

Fincher’s “Mank”, however, provides the opposite feeling. The 2020 flick is an unflinching character study of old Hollywood politics. “Mank” tackles the origin of “Citizen Kane” with Orson Welles co-writer Herman Mankiewicz (Gary Oldman) as he navigates alcoholism and a broken leg in the present and Hollywood conservatism in flashbacks. While “Citizen Kane” feels intimate and personal, “Mank” makes the audience feel like an outsider. I experienced a removal from the characters instead of an immersion into their world.

Jack Fincher’s screenplay often came off as lofty and pretentious, leaving very little opportunity for the unversed in old Hollywood drama and politics to catch up. It quickly dropped names and references, some I caught on to and some definitely flew over my head. However, a few pepperings of humorous deadpanned lines and absurd utterances from Amanda Seyfriend’s Marion Davis including “jeepers that Hitler is the creeps” lifted the mood.

The screenplay also refuses to shy away from politicization. In one scene, the Hollywood elites discuss the lunacy of Hitler and the Germans with a cool detachment. Their refusal to support a countermovement on the dictator does not come from their support of him, but rather to maintain the economy, an attitude that feels shockingly relevant in today’s politics. The conservative filmmakers also make propaganda movies to swing the election.

“The fact is nothing about Welles or the story of the making of ‘Kane’ is shocking,” junior  Owen Espinosa said. “Anyone who watches ‘Citizen Kane’ nowadays is probably only because they are interested in filmmaking, and the history behind the making of this famous picture. So Fincher does not really add any smaller known details to enhance more knowledgeable viewers’ experience.”

While “Mank” included many cameo performances, including Bill Nye as Upton Sinclair, the standouts definitely consisted of Gary Oldman and Amanda Seyfriend. Oldman’s titular role of the aging screenwriter and outsider socialist was sloppy and smart; he portrays a portly has-been who wants to put himself on the map of Hollywood. Seyfriend’s flimsy Marion appears nothing more than a dumb unlikely acquaintance to the older gentleman, yet she matches him in wit and smarts underneath her humorous flittering.

“Mank” holds a deserved lead for “Best Cinematography” at the Academy Awards because of its soft black and white aesthetic and sharp high budget shots that look breathtaking and epic. However, the whole movie feels like a too perfect replication of old Hollywood films with purposeful cigarette burns and film errors who’s intentional flaws and outdated choices felt inauthentic and orchestrated.

“The downgraded digital 8k to look like film stock, the old timey radio sounding sound design and the lighting that makes all the balck and white slightly oversaturated,” Espinosa said. “The exact look of old Hollywood 40s serials just fuel the precision I love to see in these types of films. The attention to detail within the film is marvelous and makes the viewing experience really enjoyable for people who are into that stuff.”

Is “Citizen Kane” a prerequisite for “‘Mank”? It would prove impossible to fully grasp the weight and superiority of the film’s focus without first indulging in the Hollywood classic. The screenwriter’s journey also partly mirrored Charles Foster Kane’s. They both created something with immense sway over public opinion and attitude. The role of film in “Mank” replaced the influence of yellow journalism in “Citizen Kane”.

At first thought, I found it difficult deciphering the purpose of “Mank”.  A beloved director telling a rather cynical tale of old Hollywood hardly feels like a love letter to motion pictures or even a story audiences will embrace in 2020. However, I discovered my answer in the ironic final scene with William Randolph Hearst’s organ grinder’s dancing monkey parable. “Mank” celebrates the vast influence of film in American politics and culture. The art form’s, not the industry’s, unique ability to become the organ grinder by defining generations of thought and policy is truly the magic of the movies.