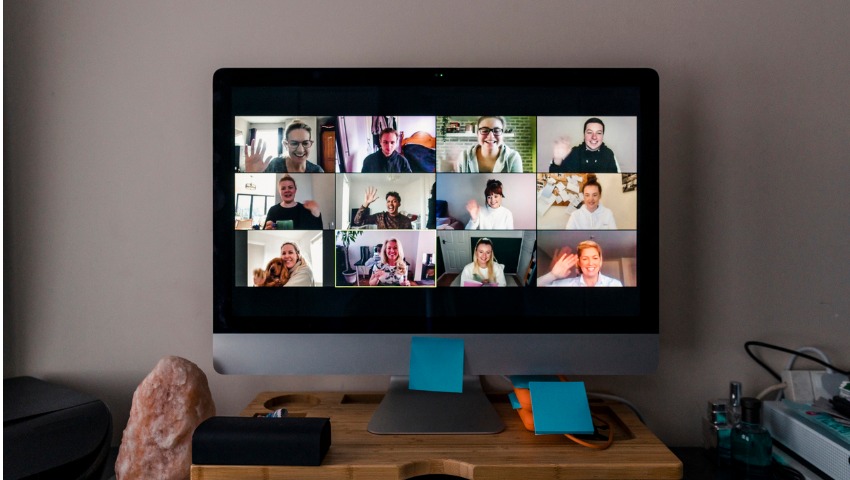 With so much reliance on Zoom conferences and constant electronic usage, people are now experiencing “Zoom fatigue”, or a combo of too much screen time and not enough eye rest. (Photo courtesy of Malik Anderson).

With so much reliance on Zoom conferences and constant electronic usage, people are now experiencing “Zoom fatigue”, or a combo of too much screen time and not enough eye rest. (Photo courtesy of Malik Anderson).

“Zoom fatigue” and blue light: the reasons why your brain is so tired

With the first full semester of remote learning wrapping up, students are feeling more exhausted than ever. On paper, being able to learn from the comfort of home should result in more energy than before; students aren’t being stretched thin by all their after-school activities and commitments. All this increased time at home and on screens has plagued many individuals with “Zoom fatigue”, a new psychiatric condition brought on by too much screen time and not enough in-person connection.

This need for natural, face to face human connection seems to be one of the most obvious reasons why individuals are lacking motivation this school year. With no real personal interaction in a school building, many students have been left feeling isolated, lonely and unable to meet new people or strengthen pre-existing relationships. For some, in person interactions also seem to play a major role in focus and endurance during a normal school day.

“For me, the face to face connections put me in a better mood and give me the energy to feed off of, which makes me more productive and less tired,” senior Alora Haran said. “It also helps me maintain focus because I am able to get my work done and interact with people, whereas at my house I frequently get exhausted because it’s just me on my own. There’s no break like there is in person.”

Fewer social interactions have also left students feeling unmotivated to complete assignments on time. Students remarked that school does not feel real, as if this learning format is pointless due to the fact that school is not operating as normal. Unfulfilled by simply completing assignments and pressing the “turn in” button on Google Classroom, many question the long term rewards from this way of learning.

Many experience extreme mental and physical exhaustion at several points throughout the day due to so many Zoom meetings. For some, this could be as simple as being a little tired, but for others this means migraines body aches. The severity of symptoms depends on the person, but each individual is affected in some way.

“Almost every afternoon, around 11-12 pm, which is the end of my school day, I get a headache and extremely fatigued to the point where I’m too drained to do my work,” Haran said. “It typically doesn’t last too long or will go away if I take a nap, but I think the fatigue comes from being on Zoom calls.”

Though the idea behind “Zoom fatigue” may seem vague to some, there is concrete evidence that blue light, or the light emitted by electronic screens, is causing direct harm to an individual’s eyesight and sleep schedule. Blue light is directly linked with melatonin, and the more blue light a person is exposed to, the less melatonin released to the brain. This type of light actually restricts melatonin’s natural entrance into the brain when sleep is induced, resulting in less hours asleep overall and a more restless sleep.

“While light of any kind can suppress the secretion of melatonin, blue light at night does so more powerfully,” a study from Harvard Medical School said. “Harvard researchers and their colleagues conducted an experiment comparing the effects of six and a half hours of exposure to blue light to exposure to green light of comparable brightness. The blue light suppressed melatonin for about twice as long as the green light and shifted circadian rhythms by twice as much (3 hours vs. 1.5 hours).”

It’s not just students that are being affected by this semester’s learning switch. The remote learning format is affecting teachers just as much, giving them fewer opportunities to connect with their students and form new student-teacher relationships. Music Production teacher Chris Gemkow commented on how Zoom has taken away some of the most important interactions we can have, which often occur so naturally between classes in the hall or at the start of a period.

“Exhaustion and fatigue are inevitable every year, regardless of Zoom, but we can usually rely on each other for inspiration, enthusiasm, and for the motivation to push past the obstacles,” Gemkow said. “We’re all still a part of a strong and supportive community, but making meaningful connections takes much more energy and effort when you’re separated by screens.”

That one-on-one student to teacher connection seems to be a big proponent of exhaustion for a lot of teachers currently leading classes from home. Without energy to feed off of, teachers are left feeling emptier than they would in person. Without being able to properly read students in the classroom and help them in the moment, teachers are left taking great strides to get to know their pupils and help them succeed in this new format.

“Zoom has been a great platform for getting work done, but it’s extremely hard to get to know people over,” teacher Matt Moran said. “There is just not a real sense of community on Zoom, which is probably my favorite part of teaching.”

With both Zoom fatigue only being worsened by blue light exposure from screens, it seems that all individuals overusing their electronic devices are paying a high cost for almost no reward. What makes it even worse is that outside of a return to an in-person learning format, there’s almost no cure. Some people have purchased blue light glasses, which are a non-prescriptive brand of glasses that contain a lens to protect the eyes, but these do not get rid of the fatigue accompanied by so much on screen usage. Despite the necessity individuals currently have for Zoom, Lee encourages individuals to find alternate modes of communication in order to give their brains and eyes a break and encourages them to stay away from screens whenever possible.

“Exploring alternative and more explicit ways to improve perceived reward psychologically during virtual communication may be a therapeutic approach for not only Zoom fatigue, but the mental and physical toll that comes with it.”