THIS IS YORK • December 16, 2020 • https://thisisyork.org/30375/uncategorized/elmhurst-public-library-creates-online-community-for-teenagers-using-discord-and-minecraft/ 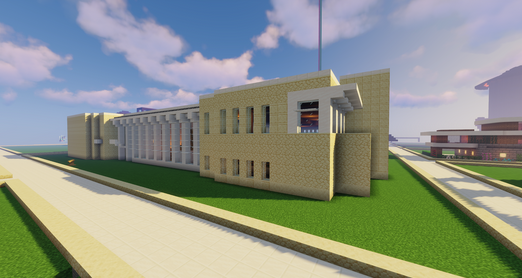 The Elmhurst Public Library Minecraft server involves many creative buildings, including a scale replica of the library itself.

Teenagers communicate and spend time together during the pandemic through Discord and Minecraft servers hosted by the Elmhurst Public Library.

Prior to the COVID-19 outbreak, the Teen Space acted as an area of the Elmhurst Public Library where teenagers exclusively could play games, study or socialize in many other ways. When the virus hit, that space, which was an important gathering place for many, had to close down. As an alternative, the library staff created the “EPL Teen Server” on Discord. Discord is a messaging platform where members can communicate through several voice or text channels. Currently, there are over 80 members of this Discord server.

“When everything shut down in March, it was a huge blow to the teen community, because we had a thriving Teen Space,” library staff Karen Stezowski said. “We had programs going pretty much most days in the Teen Space, and we had these very large Smash Bros tournaments. When the library shut down so quickly, that was on a Friday. The following Wednesday we were able to schedule our first Smash Bros tournament online, and that’s when the teen Discord was formed.”

The server hosts many different events usually reserved for the Teen Space. A comics illustrator for DC Comics is scheduled to speak to the Discord server and stream a drawing demonstration in a voice channel sometime in the near future. On top of this, there is an active Minecraft server, and the members of the Discord server will get together every other Friday to play party games. “Super Smash Bros”, a popular fighting game, has tournaments every week online.

“Before COVID, in the Teen Space, what we did for Smash Bros is we would bring in a few monitors, set them up in the windowsills, and then we would just play a bracket-style double-elimination tournament, “ junior Alex Carollo said. “We are still doing the bracket-style double elimination, except instead of in-person on the TV, we are doing it online through the bracket website.”

Along with the voice channels, the server also hosts several text channels where teenagers can talk about varying topics. Some of these include channels to talk about what you are currently reading or to ask for help on homework. One of the busiest channels is “original-content”, where people can post their original artwork or songs. Many others also give prompts to artists looking for something to create.

“Whenever I get stuck in a rut, I usually look to prompts for inspiration to get me working again,” sophomore Kayla Lorenz said. “Being given prompts by my friends is fun because it both challenges me and I get to make something for people.”

One of the largest projects for this community is their Minecraft server. The Minecraft server, also run by the library, is a place for teenagers to build a host of projects working together.

“Minecraft is a game about collaboration,” Discord moderator and York graduate David Rush said. “Especially during the pandemic where people are having difficulties being together, it’s harder to see your friends. This is a new format for socializing. It’s a way to bring people together to work on things.”

Every Monday, members of the community interested in Minecraft will get together in a voice call for, “Minecraft Monday”. Those interested will meet to help build projects, talk about Minecraft, or even take field trips to other servers. These field trips see one of the moderators visiting another Minecraft server outside of the library system and streaming its contents to the members of the call. While many of these servers represent places for players to have fun, they can also provide a learning opportunity.

“We take field trips to other servers all the time,” Stezowski said. “Probably the coolest one we’ve done recently was the Uncensored Library, by the Reporters without Borders. Reporters that have been threatened or murdered by their government, their work has been smuggled out of the country. These countries have clamped down on Google and such, but nobody has done anything about Minecraft. We read all of these amazing works of text from places like Saudi Arabia or Egypt in Minecraft.”

The EPL Teen Server currently acts as a place for teenagers of varying interests to socialize in a time where it can be difficult to get together in person. The members and staff aim to promote a positive community where people can discuss their passions without judgment or fear.

“The community is fantastic,” Stezowski said. “Genuinely, it is one of the nicest groups of kids. Making it a nice community is important to everyone who’s on there. When you think about it, it was born during the pandemic. It’s a lifeline to a lot of people who are really feeling down. And everyone works really hard to keep it a positive place.”