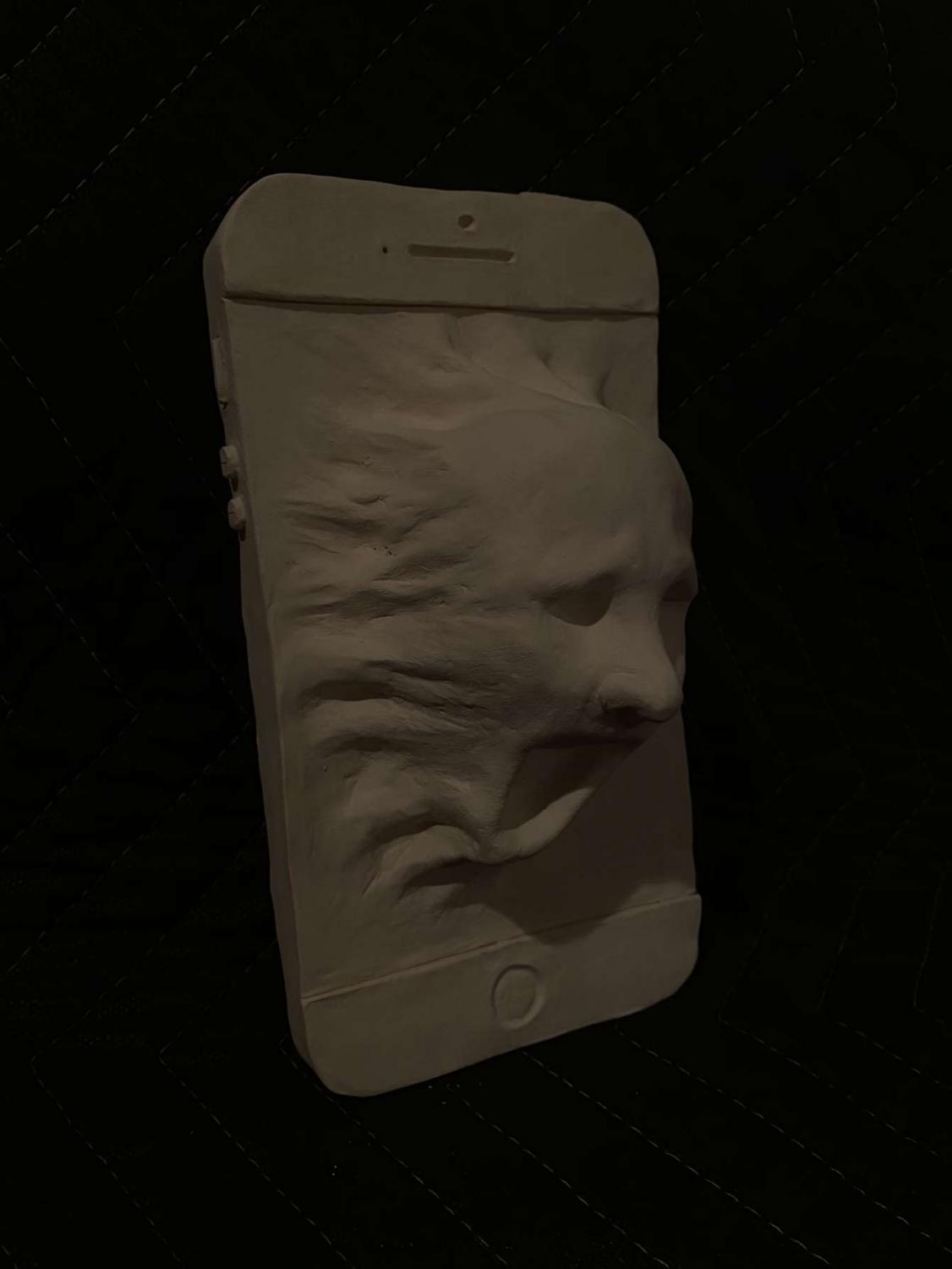 Photo of Matthew Milani’s artwork for AP Art. Milani created a clay sculpture of a screaming face coming out of a phone in theme with his chosen sustained investigation, which depicts the relationship between people and technology. (Photo courtesy of Matthew Milani)

Photo of Matthew Milani’s artwork for AP Art. Milani created a clay sculpture of a screaming face coming out of a phone in theme with his chosen sustained investigation, which depicts the relationship between people and technology.

Fifteen pieces. As art students work hard to meet this requirement for AP Art classes, they often struggle to choose a theme to base all of their artwork on. One senior art student, Matthew Milani, came up with a unique idea for his theme. Using his artistic talent and chosen medium of clay, Milani chose to explore the relationship between humans and technology in his work, pushing himself to go beyond the regular limits of the medium in the process.

Milani’s preferred mode of expression, clay, has deep roots in his childhood interest in working with tangible, three-dimensional objects, and the possibilities they bring to the table.

“I’ve always liked working with and making three-dimensional things,” Milani said. “When I was younger, I made origami, just because it was more accessible. Anyone can have paper. What I found with clay is that there are more possibilities. You know, you can pretty much make anything with clay.”

As Milani pursued clay sculpting over the years, he was able to grow and cultivate his skills and talent to a significant level. His AP art teacher, Renee Kuharchuk, is continuously impressed with Matt’s creativity and ability to sculpt.

“Matt is an incredible sculptor,” Kuharchuk said. “He makes amazing things. Especially for a high school student, being able to render the things that he’s able to do is really incredible. It’s something that is heartwarming to see as a teacher, to have seen Matt grow through the years.”

Milani’s growth and expertise culminate in his latest work for his AP Art class, in which he has to center his art around his chosen theme, or sustained investigation, regarding the relationship between man and technology. Milani’s investigation allows him to surpass the limits of clay and be versatile with the way he presents his art.

“I wanted to find ways that I could kind of push myself to go beyond just clay, and make my art pieces more interesting and have more points of interest to draw in the viewer,” Milani said.

To do this, Milani was creative in the way he approached his clay making. He incorporated real-world objects into his pieces to illustrate the connection of technology to his work.

“So I’m trying to incorporate things like wires and computer keys along with clay to kind of have a connection between actual technological devices and my medium,” Milani said. “Also, I’m trying to manipulate the human form around technology. So a lot of the things I’m creating are human faces and other things of that nature, but also incorporating phones and stuff as I said.”

Milani’s investigation surrounding people and their connection to technology has largely overlapped with recent events, as more people begin to rely extensively on technology throughout the COVID-19 pandemic.

“[Matt’s] subject matter, man versus technology, I think is really unique because it’s something that we’re all having to deal with right now,” Kuharchuk said. “Think about before even having to worry about remote learning, a lot of us would be attached to phones and just technology in general […] So that already is a relationship that’s been established, but now even more so has changed because of our tie to [remote learning], our tie to a computer, our tie to our phone, and just how that’s starting to take a toll and affect people.”

The pandemic itself caused some challenges for Milani, especially in finding a proper workspace in which he can create his sculptures.

“We have a whole clay studio at York, where students can get materials, have tools, have glazes, have different equipment and machines that they can use that help them in their building process,” Kuharchuk said. “A lot of that can be done without that extensive equipment, but Matt’s had to struggle with now transitioning to doing that at home.”

Despite that, Milani still has found advantages in working in the current remote situation.

“With COVID-19 and all, I actually probably have more time to get all that stuff done [for AP Art],” Milani said. “You know, for AP Art I’m now not restricted into doing it within the class period, and I’ve actually gotten tools and supplies and clay from the school, which is nice […] So yea, there’s definitely been some positives to it.”

So, despite current challenges and problems, Milani persevered and continues to produce his innovative artwork. As for the future, he plans to continue working with clay and even try other three dimensional mediums as a hobby.

“As far as continuing [clay] in the future, I definitely want to continue doing it whether it just be a hobby or a minor in college,” Milani said. “I don’t know if I’ll major in it, but I definitely want to continue with it. I could see myself branching out into other mediums as well, but I do like to stick to more three-dimensional things as well, so anything that’s 3-D I’m willing to try.”

Milani is just one of many AP Art students from York continuing to produce outstanding work. As we approach the end of the semester, and as these art students are working around the clock to create and organize their work for the upcoming virtual art show, Kuharchuk emphasizes her pride in her students and their ability to create wonderful art.

“I really just want to communicate to my students how proud I am of them, that they’ve been able to roll with the punches, and they’ve been able to still work really hard and to still put everything they have into their artwork even though it’s been a lot more difficult to do so,” Kuharchuk said. “I really just want to acknowledge that and say I’m continuously blown away by the work which students have been making this semester.”