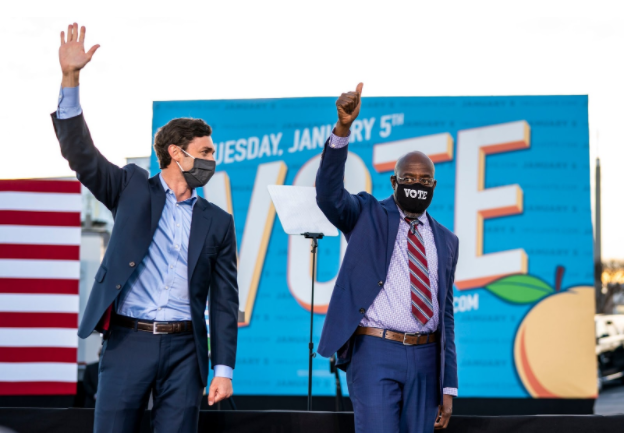 Courtesy of The New York Times

Early Thursday morning, Democrats officially took control of the Senate with a narrow 50-50 split that leaves Vice President-elect Kamala Harris as the tie-breaking vote. This occurred once the Georgia runoff elections came in with narrow Democrat victories, with Jon Ossoff and Raphael Warnock as the newly elected Senators from Georgia.

This election marks the first time Democrats have had control of both houses of Congress in six years and the first time a Democratic Senate candidate won in Georgia in 20 years. With Democratic control of the Senate, New York senator Chuck Schumer hopes to gain progress on the COVID-19 stimulus checks early 2021 as the next Senate Majority Leader.

“One of the first things that I want to do when our new senators are seated is deliver the $2,000 checks to the American families,” Schumer said.

With united partisan control of Congress and the Presidency, many Democrats are hopeful that headway can be made on COVID-19 relief, economic and social reform and climate initiatives. However, some are more skeptical about whether or not the narrow Democratic majority in Congress will allow for more efficient policy action.

Still, the message of Warnock, Ossoff and Congressional Democrats remains optimistic in addressing the concerns of Americans over the next few years and hopeful that political differences can be set aside for the sake of the country.

“Everybody who cast your ballot, everybody who put your faith and confidence in democracy’s capacity to deliver the representation we deserve,” Ossoff said. “Whether you were for me or against me, I’ll be for you.”