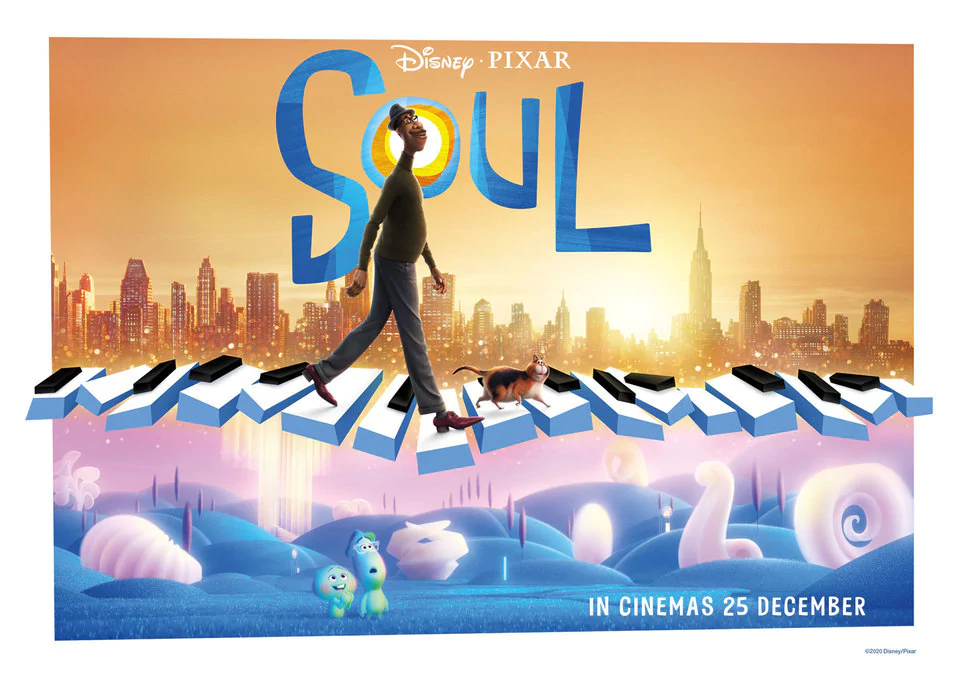 “Soul” takes place in metropolitan New York City, and involves an up and coming jazz musician searching for meaning among a complicated world. (Photo courtesy of IMDb)

“Soul” takes place in metropolitan New York City, and involves an up and coming jazz musician searching for meaning among a complicated world.

As I neared the end of Pixar’s “Soul”, it became increasingly clear I am not the target demographic for this movie. Despite the cute blue characters and a talking cat, “Soul” is surprisingly mature. The themes are geared much more towards middle-aged adults than the younger audience your average Pixar movie would attract.

“When I first went into this movie, I didn’t expect them to go into more serious topics”, junior Monica Wang said. “There was a large focus on mental health. They had a lot of deep themes I didn’t see coming.”

The star of “Soul” is Joe Gardner (Jamie Foxx), a middle school band teacher and aspiring jazz musician. Early in the film, he falls into a pothole after getting the gig of a lifetime. However, his soul narrowly escapes the afterlife. Joe finds himself in “The Great Before”, a place where souls receive their personality and quirks before entering the world. He then teams up with 22 (Tina Fey), a soul who is insistent on staying in The Great Before, as she fears life on earth. While being hunted by a hilarious antagonist named Terry (Rachel House), the two embark on an adventure together to discover the meaning of life and return Joe to his body.

At the start of the film, it can be very easy to assume “Soul” will simply be about Joe trying to succeed in the world as an artist. Going through the events of his life with 22, Joe’s belief that jazz is his one purpose is treated more as an obsession than an aspiration. It was a surprising turn to what seemed like a generic story up to this point. Joe comes to realize that the meaning of life is not perfecting one particular thing to make an impact on the world, but rather to enjoy every moment you have. This works well with 22’s arc. While Joe slowly starts to realize he has been missing out on the joys of life, so does 22, who learns everything she has to gain by living. It’s an important message, but one that many like myself won’t be able to fully appreciate until we have had more experience with our own lives.

The art of “Soul” also deserves special attention. Pixar’s animated version of New York City is absolutely gorgeous, while looking much like the actual city. This stands in contrast to The Great Before, a make-believe world which is beautiful in its own sense. The characters living there look like abstract pieces of art, and they move accordingly. Perhaps unsurprisingly for a movie titled “Soul”, the music in New York City takes heavy inspiration from jazz and soul music. In contrast, The Great Before has music that stands out in a different manner. It is ominous and orchestral. Music often plays at excellent times, and it helps important scenes make even more of an impact.

When it comes to the writing, “Soul” can actually feel a bit disjointed at times. There were many scenes in which it felt like I was watching a different movie entirely. The film introduces a lot of characters and plot points with an air of importance early on, only to disappear near the back end. For example, characters reference a woman named Lisa multiple times. Although she is implied to be Joe’s partner, we never see her or learn any information about her. Similarly, the film opens with Joe teaching his band class, and the screenplay makes a point of showing Connie, a passionate and talented student. Connie appears once more in the front half of the movie for a heartwarming scene with Joe and 22, but after that, she and her fellow classmates hardly make any appearance at all. It almost feels as if Soul was intended to be a very different movie, but it changed course late during production.

Similar scrutiny can apply to the ending. Without any spoilers, it fits the overall theme of the movie very well but feels rushed. So much happened in the last two minutes before the credits rolled that I just sat there in disbelief trying to process it all. The ending also doesn’t address any real world characters beyond 22 and Joe. It would have been nice to see some of the other people one last time. Regardless, I came around to liking the ending a few hours after the credits, but it felt like the movie needed a lot more time to wrap up.

Overall, “Soul” is another Pixar masterpiece. The plot can be flimsy at times, but the strong central themes and the relationship between Joe and 22 more than make up for it. The writing itself is further supported by amazing animation and an excellent jazz soundtrack. While still being a family movie, “Soul” is certainly aimed towards aging adults trying to reflect on their purpose in this world. For this reason, I look forward to watching it again later on in life when I can relate to Joe’s experiences in greater detail.