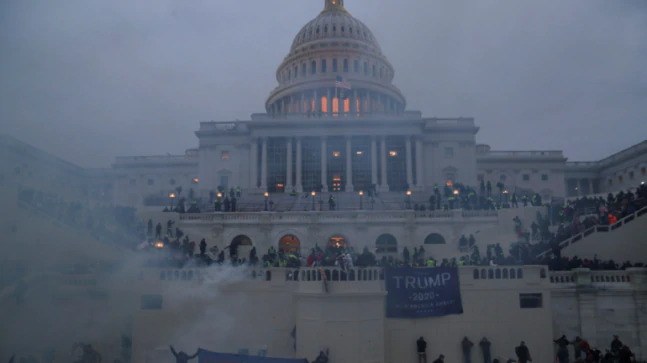 Trump supporters riot and break into the United States Capitol building on Jan. 6, 2021. (Photo by Leah Millis/Reuters licensed under C.C. 2.0)

Trump supporters riot and break into the United States Capitol building on Jan. 6, 2021.

Pro Trump rioters storm the U.S. Capitol in an attempt to disrupt the 2020 election process

During a joint session of Congress, assembled to count the electoral votes required to formalize Joe Biden’s victory in the 2020 presidential election, a mob of rioters supporting President Donald Trump’s attempts to overturn the results stormed the United States Capitol building, resulting in the deaths of five.

Both the House of Representatives and Senate met on January 6, 2021 with the goal of certifying the United States presidential election results. Trump made claims of widespread election fraud, particularly in swing states. These claims did not make it past courts in any state but were brought up during Congress. While Congress was discussing objections made by several House representatives, armed pro-Trump rioters stormed the Capitol building. Several rioters vandalized the building and broke into the offices of Congressmen.

Congress was adjourned, Vice President Michael Pence was evacuated and the Congressmen and their staffers took shelter. A total of five people were found dead including a woman who was shot and a police officer that suffered injuries during the protest. After the situation stabilized, Congress met again. Many elected officials used this time to address the incident and several Congressmen withdrew their objections.

“I am in the House Chambers,” United States representative for Michigan’s 5th district Dan Kildee said. “We have been instructed to lie down on the floor and put on our gas masks. Chamber security and Capitol Police have their guns drawn as protesters bang on the front door of the chamber. This is not a protest. This is an attack on America.”

Kildee filmed a video from inside the Hall of the House of Representatives where he and other Congressmen were hiding on the floor. Everyone present was instructed to have their gas masks at the ready and take off their congressional pins so that rioters could not identify them. There was also an audible gunshot, after which Kildee took cover on the ground. Rioters were close to breaching the door to the House Chamber, but were unsuccessful in doing so. Several rioters have been identified, including Aaron Mostofsky.

“We were cheated. I don’t think 75 million people voted for Trump — I think it was close to 85 million. I think certain states that have been red for a long time turned blue and were stolen, like New York,” protestor Aaron Mostofsky said. “Senators should not be afraid. They should get the courage to do their duty. Their duty to examine the fraud — maybe delay the election.”

The New York Post interviewed Mostofsky during the protest near the Senate chambers. The son of Brooklyn Supreme Court Judge Shlomo Mostofsky, younger Mostofsky was seen dressed in animal fur and a bullet proof vest. Mostofsky joined the group of Trump supporters breaking into the Capitol building. Hundreds of other people stormed the Capitol, while 82 have been arrested so far.

“Today was a dark day in the history of the United States Capitol,”  Pence said. “But thanks to the swift efforts of U.S capitol police, federal, state and local law enforcement, the violence was quelled. The Capitol is secured, and the people’s work continues. We condemn the violence that took place here in the strongest possible terms.”

As the rioters breached the Capitol building during the discussion on the legitimacy of Arizona’s congressional votes, when Congress began once again, many Congressmen were able to use this time to address the events that took place.

“We gather due to a selfish man’s injured pride, and the outrage of supporters who he has deliberately misinformed for the past two months and stirred to action this very morning,” Senator Mitt Romney, Republican of Utah and the 2012 presidential nominee, said after the chamber reconvened. “What happened here today was an insurrection incited by the president of the United States.”

Following the events, Trump made a video and a series of tweets addressing the protestors on Twitter. His Twitter account was later suspended a few days later “due to the risk of further incitement of violence.”

“We love you,” Trump tweeted. “You’re very special. These are the things and events that happen when a sacred landslide election victory is so unceremoniously & viciously stripped away.”

Numerous lawmakers encourage the resignation or impeachment of Trump, including Nancy Pelosi. Representative Alexandria Ocasio-Cortez, who has spoken out about Trump’s actions throughout his presidency, urged the impeachment of President Trump in order to bar him from running for presidential office again.

“Of course our main priority is to ensure the removal of Donald Trump as President of the United States,” Ocasio-Cortez said on ABC news. “When we talk about healing…the process of healing is separate and, in fact, requires accountability. Every minute and every hour that he is in office represents a clear and present danger, not just to the United States Congress but, frankly, to the country.”