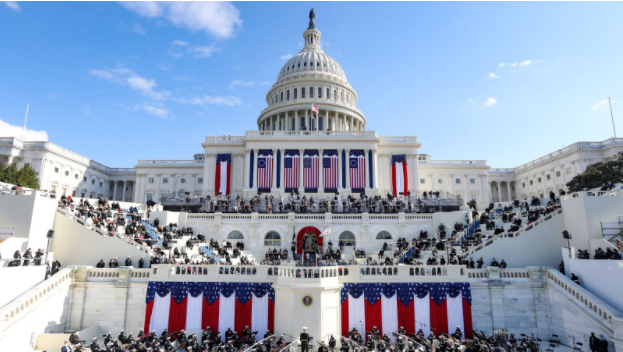 The inauguration took place on January 20th at the West Front of the Capitol Building. (Photo Courtesy of Axios)

The inauguration took place on January 20th at the West Front of the Capitol Building.

Joseph Robinette Biden Jr. was sworn in as the 46th President of the United States alongside Kamala Devi Harris as the 49th Vice-President on Jan. 20 in front of the Capitol building.

As President, Biden plans to use the Democratic congressional majority to promote sweeping change. Within his first few days in office he has already issued a set of executive orders aimed at promoting liberal policies and has rejoined the United States into the Paris Climate Accord. After the 4-year presidency of Trump, Biden’s term will display a stark difference in American politics.

“This is democracy’s day,” President Biden said. “A day of history and hope of renewal and resolve through a crucible for the ages. America has been tested anew and America has risen to the challenge. Today, we celebrate the triumph not of a candidate, but of a cause, the cause of democracy. The people, the will of the people, has been heard and the will of the people has been heeded.”

Former President Donald Trump departed the White House on Wednesday morning to a military send off in Maryland. He spoke briefly before returning to his private resort in Palm Beach, Florida.

“I will always fight for you,” Trump said. “I will be watching. I will be listening. And I will tell you that the future of this country has never been better. I wish the new administration great luck and great success. I think they’ll have great success. They have the foundation to do something really spectacular.”

Other high-profile guests included former President Barack Obama and former First Lady Michelle Obama who spoke on the importance of unity and respect and reflected on their own inauguration experience.

Amanda Gorman recited the inaugural poem “The Hill We Climb”, a tradition that began with John F. Kennedy’s inauguration in 1961. At 22 years old, she is the youngest poet to recite at the inauguration. She too spoke of unity and bridging divides to heal the nation.

“To compose a country committed to all cultures, colors, characters and conditions of man,” Gorman recited. “And so we lift our gazes not to what stands between us but what stands before us. We close the divide because we know, to put our future first, we must first put our differences aside. We lay down our arms so we can reach out our arms to one another. We seek harm to none and harmony for all.”

Kamala Harris is the first female vice president to take office. She gave her first official address at the inaugural celebration concert. The evening also consisted of performances by  Broadway musicians and celebrity speakers.

“It is my honor to be here—to stand on the shoulders of those who came before to speak tonight as your Vice President,” Harris said. “In many ways, this moment embodies our character as a nation. It demonstrates who we are, even in dark times. We not only dream—we do. We not only see what has been. We see what can be. We shoot for the moon. And then we plant our flag on it. We are bold, fearless, and ambitious.”

Despite the unconventional transition of power, President Biden made clear in his speech that unity and collaboration would be the primary focus of his administration over the next four years.

“This is our historic moment of crisis and challenge, and unity is the path forward,” President Biden said. “And, we must meet this moment as the United States of America. If we do that, I guarantee you, we will not fail. We have never, ever, ever failed in America when we have acted together. And so today, at this time and in this place, let us start afresh. All of us.”