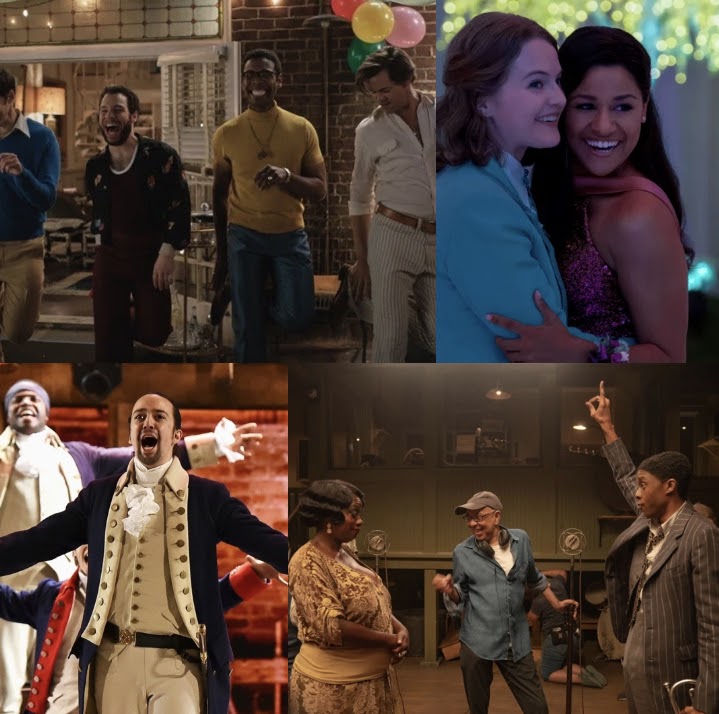 Four stage to screen adaptations stood out during 2020: “The Boys in the Band (Netflix), “The Prom” (Netflix), Hamitlon (Disney +) and Ma Rainey’s Black Bottom (Netflix). (Photos courtesy of Netflix/Disney +)

Four stage to screen adaptations stood out during 2020: “The Boys in the Band (Netflix), “The Prom” (Netflix), Hamitlon (Disney +) and Ma Rainey’s Black Bottom (Netflix).

Off the stage and onto the screen: theater adaptations thrive in a year where Broadway goes dark

Before York students knew they would not come back to school following spring break last March due to COVID-19, theater fans braced themselves for another shutdown: Broadway suspended all production through at least April 13. Since that spring afternoon, Broadway shows, along with other regional and school performances, cancelled, revised or postponed their productions. Live theater remained absent from the abnormal 2020 and beginning of 2021.

However, a few musicals and plays became available for the small screen. While movie adaptations and pro shots were no anomaly prior to 2020, the year without live theater increased my appreciation for the newly accessible productions. Four shows stood out: “Hamilton” (Disney +), “Ma Rainey’s Black Bottom” (Netflix), “The Boys in the Band” (Netflix) and “The Prom” (Netflix). Each adaptation brought theater to streaming services in unique ways to varying degrees of success.

In July, Disney + released a professional recording of Broadway sensation “Hamilton”. The adaptation transcended typical theater audiences; Disney + downloads increased by 74% when the musical debuted. “Hamilton” has taken pop culture by storm for the last half decade, so the summer success hardly came as a surprise.

I first saw “Hamilton” in Chicago in early 2017. Three years later, it felt impossible not to feel the same charm and excitement. The musical exuberates passion; the choreography feels energized, the score is memorable and the lyrics amaze viewers with their intelligence and relevance. Every actor, save Miranda himself, performs with heightened stakes and beautiful vocals.

While the pro shot provided a live theater experience from home, some of the filming and editing choices interrupted the viewing. The professional recording uses too many angles and cuts for a musical. The incredible (Tony winning) choreography should have been further showcased. A lot of the movement motifs may be lost on audience members as the camera stayed on the leader actor for too long. Ideally, the camera could have used more wide shots of the whole stage.

“I think the ‘Hamilton’ movie was successful in that it allowed people to see the show,” senior Katie McCann said. “It was unsuccessful because you did not get the same experience as you would in the theater because it kept zooming in on their faces. You can’t really see the dancers in the background, so you missed out on a lot of the work that the actors did.”

The infamous musical’s release on Disney + made “Hamilton” accessible to wider audiences, and hopefully, further immortalized the musical as a theater staple. I hope it continues to imprint a love for the stage in future audiences.

In 2015, Denzel Washington announced he planned to produce the entirety of August Wilson’s “The Pittsburgh Cycle” for the big screen. The series accounts the experience and lives of Black individuals during the twentieth century. As the second adaptation in the series, “Ma Rainey’s Black Bottom” follows a blues singer as she attempts to record music with a band. Tensions quickly arise between Ma Rainey, the bandmates and the producers.

Directed by George C Wolfe, “Ma Rainey’s Black Bottom” is arguably 2020’s most successful adaptation of a stage production. The direction never attempts to transcend the “made for the stage” script; however, Wolfe uses the new medium of storytelling to increase impact. There are only about three locations in the movie, but each one emphasizes a new scene and tone. In one section of the play, the editors layered two different scenes. This effectively raised the tension and drama of Ma Rainey’s filming session.

“Ma Rainey’s Black Bottom” contained multiple long monologues from its leads: Ma Rainey (Viola Davis) and Levee (Chadwick Boseman). While the declarations could have easily felt long and out of place in a film, Davis and Boseman’s exhilarating performances engaged viewers in their stories and emotions. Boseman’s tragic passing due to colon cancer this year enveloped his final performance with melancholy; his performance surprised, delighted and left me longing for what might have been. A posthumous award for his performance would be well deserved for a fantastic portrayal of a desperate musician and a wonderful career.

“Ma Rainey’s Black Bottom” explores the tribulations and abuse of Black musicians, specifically in the 1920s. I am delighted Wolfe made the relevant story of the real Ma Rainey who unabashedly stood up for her contributions to the blues genre accessible to Netflix viewers.

“The Boys in the Band”

“The Boys in the Band” shocked initial audiences in 1968 in its Off-Broadway debut, and again in a 1970 film adaptation. The 2020 adaptation, featuring the entire 50th anniversary Broadway cast, follows seven gay men celebrating their friends birthday in 1960s New York City. Shortly into the evening, the host receives a call from a crying college roommate. When the unexpected guest arrives at the party, tension arises between the man and party attendees.

The biggest flaw with Joe Mantello’s adaptation contrasted with “Ma Rainey’s Black Bottom” in its few yet distracting attempts at transcending its play status. In a pivotal scene of the play, multiple characters experience flashbacks. These flashbacks felt out of place in the movie as the entire piece stayed on one set. They disrupted important monologues and character moments.

Every actor in “The Boys in the Band” gave an excellent performance that rounded out gay archetypes into real people with both platonic and romantic relationships with one another. While I dislike Jim Parsons’ affinity for overwrought drama, his spiral into drunk hatred as the host (for himself and his party guests) carried the central messages and themes of the piece.

Similar to “Ma Rainey’s Black Bottom”, “The Boys in the Band” revives an older, influential play back into the public consciousness. Campy and socially relevant, the play passes quickly in its two hour run time.

“The Prom” contained everything it needed to be a successful movie musical. Catchy music? Check. Sparkly and campy musical numbers? Check. A heartwarming and relevant social message? Check. However, “The Prom” disappointed me the most out of any other play adaptation. The 2016 musical follows four Broadway actors who find themselves labelled aging narcissists. To combat the narrative, they attach themselves to a social cause. The four performers travel to Indiana where a teenage girl was prohibited from her school prom after expressing interest in attending with her girlfriend.

The very simple plot of “The Prom” drags out for over two hours, most likely due to the sheer number of musical numbers. While all of the songs would translate well on stage, numbers, such as Keegan Michael Keys’ “We Look To You” and Meryl Streep’s “The Lady’s Improving”, feel unnecessary and tack on additional minutes. The movie also spends too much run time on the adult relationships and conflicts; so much so, the teenagers feel like side characters.

“The overall production of ‘The Prom was stunning,” senior Meagan Maiers said. “The costumes, set and story were great. It was a well done LGBT story with a happy ending. I think some of the characters did not get enough backstory so you had a hard time keeping up with who was who. I think there needed to be more development within dialogue rather than throwing in random songs just to have them.”

The credit role of “The Prom” includes big names such as Meryl Streep, James Corden, Nicole Kidman, Andrew Rannells and Kerry Washington. Meryl Streep delighted as always with her splashy musical numbers and comedic narcissism. Nicole Kidman, Andrew Rannells and Kerry Washington all shined in their moments. New comer Jo Ellen Pellman as Emma, the teen lesbian excluded from the prom, lacked any real depth and tended to flip between two facial expressions. James Corden offended many audiences as a stereotypically flamboyant gay actor, and his emotional scenes even felt ingenuine and forced.

While “The Prom” movie adaptation did not impress, it still contained plenty of heartfelt and emotional moments. It had a happy and satisfying conclusion, an unfortunately rare sight in a lot of LGBT media. As far as holiday releases go, “The Prom” should entertain and fill the theater sized hole in our quarantine damaged hearts.

As a self proclaimed “theater kid”, I will pompously claim that no movie adaptation successfully captures how theater should be experienced: live. So why attempt to translate work written to be performed live to the screen? Most obviously, movie adaptations make theater more accessible to wider audiences. Even without a pandemic, seeing live performances can be expensive and time consuming. Movies and professional recordings of theater allow more people to experience musicals and plays.

Additionally, every show cannot be produced forever. Therefore, many plays and musicals depicting a time in American history may be lost as audiences never receive the opportunity to see them. Recorded distributions of theater immortalizes the piece, and in some cases, the history and culture behind it. “Hamilton” may be viewed as a counter response to the Trump administration as the musical embraces diversity in America. “Ma Rainey’s Black Bottom” tells the story of mistreated Black musicians and their stolen work during the twentieth centuries. “The Boys in the Band” shows a pre Stonewall state of queer liveliehood enshrouded in shame. “The Prom”, which has yet to stand the test of time, criticizes both Midwestern conservatism and eastern liberal activism. These shows depict the ever changing culture and history of the time periods in which they occur, exposing modern viewers to the problems of the past and present.