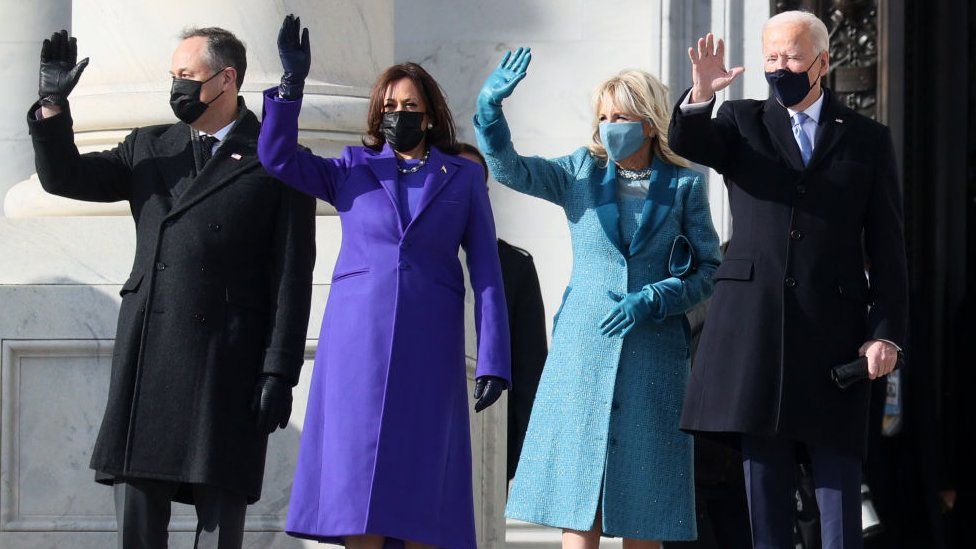 The 2021 inauguration attendees dressed to impress to commemorate the new President.

A perfect example of this is Madame Vice President Kamala Harris’s outfit. Harris chose to wear a tailored coat and dress by designer Christopher John Rogers. These choices were made very thoughtfully, with purpose and intention. Christopher John Rogers is a Black, queer, American designer from Louisiana. He’s dressed many other notable women of color, including Michelle Obama, Lizzo, Rihanna and Cardi B. The monochrome color coordination of her outfit adds a level of sophistication and professionalism, while still being fashionable.

“The monochrome theme that a lot of the women went for looked so good,” senior Hannah Lonergan said.

This technique was used by many other people who attended the inauguration. The color purple symbolizes power and ambition. Purple is also seen as a feminine color; on top of this she also chose to wear a custom pearl necklace by Wilfredo Rosado. Pearls are well recognized as a very feminine accessory. Harris’s choices to actively show her femininity is something to be noted. In the 1930s, when many women were joining the workforce, and in efforts to gain the respect of their male colleagues, many women started wearing shoulder pads and pantsuits. These fashion trends became popularized due to the belief indoctrinated into women that the only way they could be seen as professional is if they looked like men. Kamala Harris has embraced her feminity, proving that femininity and power are no longer mutually exclusive.

Keeping with the theme, the next couple of looks will be all monochrome, starting off with Dr. Jill Biden. Many people are disappointed with the lack of coordination between president Biden’s outfit and Dr. Jill Biden. She dressed head to toe in a beautiful turquoise color, and President Biden’s tie is in the realm of baby blue, just enough shades off to be noticeably different. Other than this minor discrepancy, both President and Dr. Biden’s outfits were perfectly suitable for the occasion.

“First lady Jill Biden’s outfit was my favorite because I love the color and I think that a dress is a little more professional than pants,” sophomore Anna Lakosky said.

Dr. Jill Biden’s beautiful coat, dress and matching mask were made for her by Alexandra O’Neill, founder of the Markarian luxury womenswear label. That luxury can definitely be seen in Dr. Biden’s outfit, from the Swarovski crystal and pearl embellishments, to the velvet collar and cuffs, her outfit can be described as luxurious and classy.

Former first Michelle Obama has been known to support and bring attention to American Designers and fashion. Obama’s outfit for the inauguration was created by designer Sergio Hudson. Hudson is a young Black designer who created his own label that is designed and produced entirely in Los Angeles.  The outfit was a monochrome plum outfit which consisted of an overcoat, turtle neck, palazzo pants and a statement belt.

“The plum color on Michelle suits her really well,” Lonergan said. “The wide-leg pants are also very on-trend for this year too,”

This look was extremely glamorous and put together, but the outfit was not the only thing that created this head to toe remarkable presence for Michelle Obama at this ceremony. Obama’s hair by Yene Damtew and styled by Meredith Koop really pulled this look together.

Vice president Kamala Harris’s step daughter Ella Emhoff may not have been very well known before the inaugural ceremony, but after showing up in this stunning outfit, she was certainly the topic of many complimentary conversations.

“I dug Ella Emhoff’s outfit with the plaid dress, the collar and the embroidery is so cute,” senior Addie McClary said. “and the glasses really bring it all together.”

It is no surprise Emhoff wore such an extraordinary outfit considering she is a current student at Parsons School of design and runs her own small business selling handmade knitwear. Emhoff’s outfit was styled by Joseph Charles Viola; it is made up of a prairie style maroon dress, designed by Batsheva, a Miu Miu coat with beautiful orange and yellow beaded embellishments on the shoulders, an oversized embroidered white collar, a black headband from Loeffler Randall and leather gloves. The overall outfit can be categorized in the currently very trendy cottage core aesthetic, due to the vintage vibe and floral accents of the outfit. This outfit combines femininity from the embroidered collar and dress with the masculinity of the leather gloves and structured jacket, which creates a very androgynous feel that Ella Emhoff incorporates in many of her outfits.

Last, but according to York students, definitely not least: Bernie Sanders. After sending out a poll to York’s students the astounding response was that everyone loves Bernie and his iconic mittens.

“Bernie Sanders inauguration outfit was my favorite because Bernie is such a cute and wholesome old man,” junior Margaret Wasco said.

Sander’s outfit may not be as expensive or made by notable designers, but it is memorable nonetheless.

“Bernie’s was my favorite purely because it was the most functional out of all of them,” junior Anne Griffin said.  “He dressed for the weather in a way that any American citizen could and didn’t set unrealistic standards in the world of inaugural fashion.”

Sanders’s outfit went instantly viral after the inauguration and was turned into thousands of memes and Bernie themed merchandise. This is partially because of the younger generation’s love and support for Bernie Sanders, as well as the story behind Sander’s mittens being made out of recycled wool, from a small business run by an elementary school teacher, and Bernie is simply an icon.

All the outfits worn were amazing and truly reflected the celebratory nature of this day.