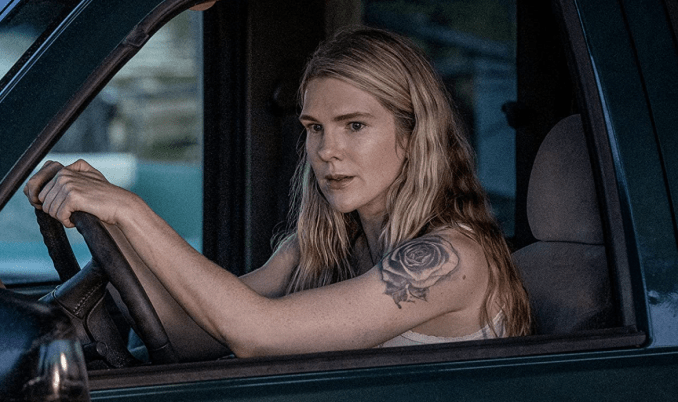 First came “The Outsider”, then “The Undoing”, now “Tell Me Your Secrets”, the newest psychological thriller available for streaming. Released on February 19, the show was originally developed for TNT under the title “Deadlier Than the Male”, with the entire first season being shot over three years ago with an entirely different cast and creative team. It was ultimately rejected from the network for not being the right fit, but Amazon does not seem to be the perfect fit for the recent iteration of the series. Similar to other series in the genre, “Tell Me Your Secrets” ends up as another thriller relying too heavily on the curiosities instead of providing hte audience with answers.

The series follows three characters cast in a shroud of mystery and regret: Emma Hall (Lily Rabe), formerly known as Karen Miller, is a woman fresh out of prison under Witness Protection, John Tyler (Hamish Linklater) is a serial predator on parole and looking to redeem himself and Mary Barlow (Amy Brenneman) is a grieving mother who hires Tyler to help her find her missing daughter. As Mary looks for her daughter Theresa, we continue to wonder whether or not she was stolen by Emma’s ex-boyfriend and serial murderer Kit Parker.

Halfway through the second episode, I found myself nearly giving up on the series altogether. I just kept asking myself what in the world was going on. This show is all about picking up on context clues as you go, and I got there eventually, but not quite. Around halfway through the third episode, however, I was relatively hooked. Though there were ten plot lines all circulating around one another, they combined well enough to keep me intrigued and didn’t pull my attention a thousand different ways.

One explanation for the series’ rejection from TNT could be the dark subject matter, with the storyline revolving around a series of disappearing girls and the gruesome details of their deaths. The show was created by Harriet Warner, who is best known for her BBC period drama “Call The Midwife” which is much more wholesome and heartfelt than “Tell Me Your Secrets” ended up being. It’s evident in the story’s writing that the show was developed to include some of these more demure elements, yet with such a dark and brooding subject, it comes off more artificial than genuine at times.

The slow and smooth reveal of Emma/Karen’s past, especially when it comes to memories she has of her ex, were one of my favorite parts of this show. They did it in a way that really made it seem like we were actually stepping into Emma’s mind for a moment, and they always revealed just the right amount of detail to keep me satisfied yet still interested. A lot of that could also have a lot to do with Rabe’s performance, which was really strong. She was handed an incredibly complex character (it’s sort of like playing two people, going back and forth from Emma to Karen), and she did it with a lot of range.

Linklater was another one of my favorites, and the way he embodied John Tyler always had me on edge; the character had this outward appearance of serenity, yet you could almost see the tension and anger boiling just beneath the surface. I actually found out that Rabe and Linklater are a real-life couple and even have children together, which just makes their on-screen relationship all the more interesting. They play enemies instead of love interests; one is in hiding, and the other has been hired to find the escapee, and it’s a really interesting dynamic to watch. I don’t necessarily see either actor winning any awards for their performances, but they were definitely complex enough to sell the story well and keep me going through all ten episodes.

Other performances, like that of Amy Brenneman, were not at all impressive to me. Every time she was in a scene, it suddenly all felt artificial. I don’t know why I was so turned off by such a veteran actor; the woman has three Golden Globe and five Primetime Emmy nominations on her resume, but I didn’t get a convincing vibe from her. Brenneman’s character could’ve been played in a way where I also sympathized with her. The character just ended up not being a good person, and I felt angry at her more than I did sympathetic.

As gripping as this show could be, there were quite a few moments where I was genuinely confused as to why I was still watching. This show sort of felt as if it had everything and also nothing going on at all. For instance, while the idea of this grieving mother going after the woman who may or may not have had anything to do with the multiple murders her ex committed seems kind of plausible, the lengths she goes to see it through are sort of ridiculous at times. There’s even an entirely separate plot revolving around Emma’s therapist, who also happens to be the man who put her in Witness Protection, and his wife, but they had very minimal connection with Emma, and I was left feeling nothing towards them.

Emma also had some motives that confused me. For one, she befriends multiple young, teenage girls almost immediately after her prison release, which seemed rushed and forced in some areas. It was obvious that Emma’s motives for friendship came from her guilt for what her ex did to so many similarly-aged girls, but at the same time, why? Why are sixteen year old girls just suddenly following around this reserved, intimidating woman who just appeared out of nowhere? It all just had my head spinning, and it was never really explained.

Technically, the show was pretty strong. The music ranged from intense to airy and was implemented at the perfect times, and the directors never failed to create clear, striking frames that told a story. The moments of flashback were always shot differently than were the moments in reality, and there was something whimsical about the music combined with the angle that always made me wish I could view the world through Emma’s eyes before her tragedy. The editing could be choppy at times, but I got used to it eventually.

“Tell Me Your Secrets” had its hits and its misses yet was creative enough to keep my interest peaked. There’s rumors of a second season in development, but I don’t know that I’d necessarily tune into it. Of the twists the writers did throw at me, there were very few I was actually interested in.In all, this show was enjoyable in the moment yet easily forgettable after the fact. In the end, this new thriller ended up being a lot like its many predecessors; it had a ton of potential yet relied too much on the cloud of mystery surrounding it that no answers were actually given.